The document Class 9 SST Sample Paper 3 (Term 1) Notes | EduRev is a part of the Class 9 Course Sample Papers For Class 9.
All you need of Class 9 at this link: Class 9 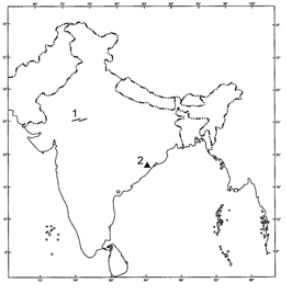 Ques 22: Locate and label the following on political map of India.(a) Southernmost point of India's mainland(b) A dam on the Krishna river in Andhra Pradesh(c) The highest mountain in Indian territory(d) A dam on Kaveri river near Mysore in Karnataka.Ans: