Ques 1: What is latent heat of vaporization?Ans: It is the heat energy required to change 1 kg of a liquid to gas at atmospheric pressure at its boiling point. Ques 2: State Newton's second law of motion.Ans: It states that, the rate of change of momentum of a body is directly proportional to the applied force and this change in momentum takes place in the direction of force.Ques 3: A student takes some water in a beaker and heats it over a flame for determining its boiling point. He keeps on taking its temperature readings. What does he observe regarding the temperature of water?Ans: The temperature of water first increases gradually and then becomes constant (boiling point).Ques 4: State whether evaporation is surface phenomenon or bulk phenomenon. Give reason.Ans: Evaporation is surface phenomenon because it occurs at the surface of the liquid.Ques 5: What is the name given to the process when a substance in gaseous state changes directly into the solid state without going through liquid state and vice versa?Ans: Sublimation.Ques 6: Ishita heated a mixture of iron fillings and sulphur in a test-tube for sometime till a greyish black product was formed. She cooled the test-tube and added few drops of carbon disulphide and shook it well. Which colour of the solution she found on shaking it?Ans: The solution turns yellow due to sulphur powder. Sulphur is soluble in carbon disulphide.

Ques 7: To separate a mixture of sand, common salt, camphor and iron fillings, Ishu added some water to the mixture in a test-tube and shook it well. Which component will be dissolved water?Ans: Common salt.Ques 8: When magnesium ribbon is burnt in air, what will you observe?Ans: A dazzling white light is produced.Ques 9: A thermometer has 20 equal divisions between 90°C and 100°C marks. A student while determining the boiling point of water finds that the mercury thread becomes stationary at the 19th mark above 90°C. What should he record the boiling point of water?Ans: 99.5° C is the boiling point of water since least count is 0.50° C.Ques 10: What is the colour of pure ammonium chloride?Ans: It is white in colour.Ques 11: Name the organelle (i) Which digest unwanted organic substances. (ii) Which helps in protein synthesis.Ans: (i) Lysosomes(ii) RibosomesQues 12: When iodine solution is added to crushed potato sample, it develops blue-black colour. Why?Ans: It gives blue-black colour due to presence of starch.Ques 13: Define alloy. Why an alloy is considered as a mixture?Ans: An alloy is a homogeneous mixture of two or more metals or a metal and a non-metal and cannot be separated into their components by physical methods. An alloy is considered as a mixture because it shows the properties of its constituents and have variable composition, e.g., brass is a mixture of 30% Zn and 70% Cu.Ques 14: Why does a block of plastic released under water come up to the surface of water?Ans: Since, block of plastic is light in weight, it displaces more weight of water than its own weight, therefore, experiences more buoyant force than its own weight. This buoyant force pushes it up to the surface of water.Ques 15: (i) What is the nature of work done by frictional force?(ii) What is the unit of the coefficient of limiting frictional between two surfaces in contact?Ans: (i) The work done by the frictional force is negative as it always opposes motion.(ii) It has no unit. Because the coefficient of limiting friction is the ratio of force of friction and normal reaction.Ques 16: (i) How can ferrous supplied be formed?(ii) Which solvent is used to separate sculpture from iron fillings?Ans: (i) Ferrous sulphide can be formed by heating iron fillings with sulphur.]

Ferrous sulphide(ii) Carbon disulphide (CS2) is used. It is because sulphur is soluble completely in carbon disulphide.Ques 17: Differentiate between parenchyma and chlorenchyma.Ans: Chlorenchyma: It contains chlorophyll and perform photosynthesis. It does not contain large air cavities.Aerenchyma: It does not contain chlorophyll.   It contain large air cavities to give buoyancy to the plant.Ques 18: Give reasons for the following.(i) Inner membrane of mitochondria is deeply folded.(ii) Mitochondria is called power house of cell. Why?Ans: (i) These folds create a large surface area for ATP generalist chemical reaction.(ii) The energy required for various chemical activities is released by mitochondria in the form of ATP molecule.Ques 19: (i) What is evaporation?(ii) Name the factors on which evaporation depends.Ans: (i) It is the phenomenon in which only the high energy molecules leave the liquid surface.(ii) Evaporation depend upon the (a) nature of the liquid (b) humidity of air (c) pressure on the liquid surface (d) temperature of the liquid (e) area of the exposed surface.Ques 20: Calculate the mass of sodium sulphate required to prepare its 40% (mass %) solution in 100 g of water.  Ans: Let the mass of sodium sulphate required be = xg ∴ The mass of solution is = (x/100)gPercentage of solution = (Mass of Solute/Mass of Solution)*100 40 = (x/x + 100)*100or40x + 4000 = 100x60x = 4000x = 4000/60= 6667gQues 21: Identify what do the graphs shows in the figure given below

Ques 24: Differentiate between mass of an object and its weight.Ans: Mass: Amount of matter in a body. Measured by physical balance. SI unit is kilogram. Constant at all the places in universe.Weight: Force of gravity acting on a body. Measured by spring balance. SI unit is Newton. Variable and changes with the change in acceleration due to gravity. 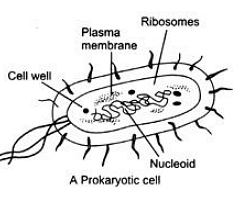 Ques 28: (i) What is the function of blood?
(ii) Name three types of blood cell and give their function.
Ans:(i) Blood is a carrier of oxygen and food to all cells of the body. It also collect waste from all parts of the body and carries them to liver and kidney for disposal.
(ii) Three types of blood cells are White Blood Cells (WBCs), Red Blood Cells (RBCs), Platelets.
Functions:
(a) RBCs transport respiratory gases, oxygen and carbon dioxide.
(b) WBCs fight with diseases by producing antibodies and engulfing the germs.
(c) Blood platelets helps in clotting of blood.

Ques 29: What is crop rotation? Enumerate some difference between mixed cropping and inter cropping.
Ans: Crop rotation: The growing of different crops on a piece of land in a pre-planned succession is known as crop rotation."
Mixed Cropping: Seeds of two crops are mixed before sowing. It involves no set pattern of rows of crops. It has a target to minimize the risk of crop failure.   Harvesting and threshing of crops separately not possible.
Inter Cropping: Seeds of two crops are not mixed. It involves set patterns of rows of crops. It has target to increase productivity per unit area. Both crops are easily harvested and threshed separately.

Ques 30: (i) Name the month during which kharif crop is grown.
(ii) List any four factors, which crop variety improvement has done.
Ans: (i) Kharif crops is grown during the month from June to October.
(ii) Four factors for which crop variety improvement is done are as follows.
(a) Higher yield To increase the productivity of crop per acre.
(b) Improved quality N Quality consideration such as baking quality, protein quality, oil quality and preserving quality of crop products vary from product crop to crop.
(c) Biotic - abiotic resistance N Crop on production can go down due to bioric and abioric stresses under different situations.
(d) Change in maturity duration N The shorter the duration of the crop from sowing to harvesting, the more economical is the variety.

Ques 31: Taking one example, show the experiment of process of sublimation.
OR
(i) Define boiling point.
(ii) Express the boiling point of water in Celsius as well as well as Kelvin scale.
(iii) How will you show the presence of water vapors in air?
(iv) Give the full forms of (a) LPG (b) CNG.
(v) Why evaporation is called surface phenomenon?
Ans: Put an inverted funnel over the China dish. 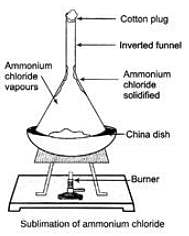 Cover the steam of funnel by a cotton plug. Now heat the dish slowly. Observation Ammonium chloride change its state from solid to vapours directly without going through liquid state. Inference The change of state directly from solid to gas without changing in liquid state (or vice versa) is called  sublimation.

OR
(i) Boiling point of a liquid is that fixed temperature at which that liquid changes into gaseous state rapidly.
(ii) Boiling point of water is 100° C or 373° K.
(iii) Anhydrous calcium chloride turns wet on keeping exposed to air.
(iv) (a) LPG Liquefied Petroleum Gas (b) CNG Compressed Natural Gas
(v) Since evaporation occurs only from the surface of liquid.

Ques 32: Describe the different kind of irrigation systems adopted in India. OR Enumerate some differences between.
(i) inland fishery and marine fishery.
(ii) broilers and layers.
(iii) spraying and fumigation.
Ans: The irrigation system are:
(i) Wells They are of two types:
(a) Dug well In this type of well, water is collected from water bearing strata.
(b) Tubewell In this type of well, water is lifted by pumps from deeper strata for irrigation.
(ii) Canals In this systems, canals receives water from one or more reservoirs or from rivers. The main branch is divided into branch canals with many distributaries to irrigate fields.
(iii)River lift system Most common in areas, where canal flow is irregular or insufficient due to less numbers of reservoirs release. In lift system water is directly drawn from rivers for irrigation in areas near  to rivers.
(iv)Tanks These  are  small  storage  reservoirs intercepting and storing the run-off of smaller catchment areas.

OR
(i) Differences between Inland and Marine Fishery

(ii) It is the method to rear domestic fowl for production of eggs and meat. Poultry farming aims at improving poultry breeds. Fowl producing eggs are called layers. Fowl producing meat are called broilers.
(iii) The proper storage of grains can be done by proper treatment and by systematic management of wore houses. It includes cleaning, proper drying, fumigation, spraying etc. Fumigation is the process of providing chemical fumes of the pestes for their control in the storage site while spraying is the method of providing chemical directly to the storage material.

Ques 33: Write two differences between the muscles present in the heart and the limbs of man. Also draw labeled diagram of these two kinds of muscles.
Ans: Muscles present in heart is cardiac muscles and that present in limbs is voluntary or striated muscles.
- Striated Muscles 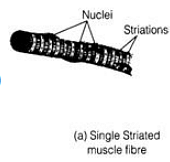 It is arranged in bundles, Its ends are blunt. 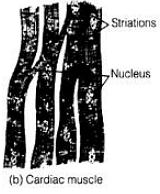 It is arranged in network. Its ends are flat and zig-zag.