CLASSES OF COMPANIES UNDER THE ACT: 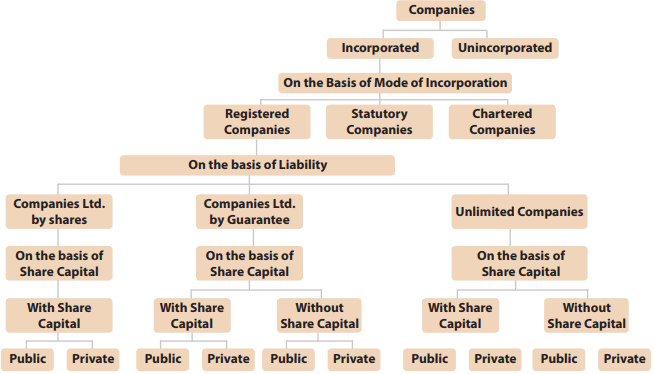 The growth of the economy and increase in the complexity of business operation in the corporate world has led to the emergence of different forms of corporate organizations. To regulate them, the Companies Act, 2013 has broadly classified the companies into various classes.

A company may be incorporated as a one-person company, private company or a public company, depending upon the number of members joining it. Again it may either be an unlimited company, or may be limited by shares or by guarantee or by both. On the basis of control, companies can be classified as associate company, holding company and subsidiary company. Some other forms of classification of companies are foreign company, government company, small company, dormant company, Nidhi company and company formed for charitable objects.

Companies may be classified into various classes on the following basis:

1. On the basis of liability:

It thus implies that for meeting the debts of the company, the shareholder may be called upon to contribute only to the extent of the amount, which remains unpaid on his shareholdings. His separate property cannot be encompassed to meet the company’s debt.

Thus, the liability of the member of a guarantee company is limited upto a stipulated sum mentioned in the memorandum. Members cannot be called upon to contribute beyond that stipulated sum.

The common features between a ‘guarantee company’ and ‘the company having share capital’ are legal personality and limited liability. In the latter case, the member’s liability is limited by the amount remaining unpaid on the share, which each member holds. Both of them have to state in their memorandum that the members’ liability is limited.

However, the point of distinction between these two types of companies is that in the former case the members may be called upon to discharge their liability only after commencement of the winding up and only subject to certain conditions; but in the latter case, they may be called upon to do so at any time, either during the company’s life-time or during its winding up.

It is clear from the definition of the guarantee company that it does not raise its initial working funds from its members. Therefore, such a company may be useful only where no working funds are needed or where these funds can be held from other sources like endowment, fees, charges, donations, etc.

2. On the basis of members:

(a) One person company: The Companies Act, 2013 introduced a new class of companies which can be incorporated by a single person.

Section 2(62) of the Companies Act, 2013 defines one person company (OPC) as a company which has only one person as a member.

One person company has been introduced to encourage entrepreneurship and corporatization of business. OPC differs from sole proprietary concern in an aspect that OPC is a separate legal entity with a limited liability of the member whereas in the case of sole proprietary, the liability of owner is not restricted and it extends to the owner’s entire assets constituting of official and personal.

The procedural requirements of an OPC are simplified through exemptions provided under the Act in comparison to the other forms of companies.

According to section 3(1)(c) of the Companies Act, 2013, OPC is a private limited company with the minimum paid up share capital as may be prescribed and has at least one member.

• Only one person as member.

• The memorandum of OPC shall indicate the name of the other person, who shall, in the event of the subscriber’s death or his incapacity to contract, become the member of the company.

• The other person whose name is given in the memorandum shall give his prior written consent in prescribed form and the same shall be filed with Registrar of companies at the time of incorporation.

• Such other person may be given the right to withdraw his consent.

• The member of OPC may at any time change the name of such other person by giving notice to the company and the company shall intimate the same to the Registrar.

• Any such change in the name of the person shall not be deemed to be an alteration of the memorandum.

• shall be eligible to incorporate a OPC;

• shall be a nominee for the sole member of a OPC.

• No minor shall become member or nominee of the OPC or can hold share with beneficial interest.

• Such Company cannot be incorporated or converted into a company under section 8 of the Act. Though it may be converted to private or public companies in certain cases.

• Such Company cannot carry out Non-Banking Financial Investment activities including investment in securities of anybody corporate.

• OPC cannot convert voluntarily into any kind of company unless two years have expired from the date of incorporation, except where the paid up share capital is increased beyond fifty lakh rupees or its average annual turnover during the relevant period exceeds two crore rupees.

Here the member can be the sole member and director

(b) Private Company [Section 2(68)]: “Private company” means a company having a minimum paid-up share capital as may be prescribed, and which by its articles,—

(i) restricts the right to transfer its shares;

(ii) except in case of One Person Company, limits the number of its members to two hundred:

Provided that where two or more persons hold one or more shares in a company jointly, they shall, for the purposes of this clause, be treated as a single member:

(A) persons who are in the employment of the company; and

shall not be included in the number of members; and

(iii) prohibits any invitation to the public to subscribe for any securities of the company;

• Minimum number of members – 2 (except if private company is an OPC, where it will be 1)

• Prohibition on invitation to subscribe to securities of the company.

• Small company is a private company.

• OPC can be formed only as a private company.

• Small Company: Small company given under the section 2(85) of the Companies Act, 2013 which means a company, other than a public company—

(i) paid-up share capital of which does not exceed fifty lakh rupees or such higher amount as may be prescribed which shall not be more than five crore rupees; and

(ii) turnover of which as per its last profit and loss account does not exceed two crore rupees or such higher amount as may be prescribed which shall not be more than twenty crore rupees:

Exceptions: This section shall not apply to:

(A) a holding company or a subsidiary company;

(B) a company registered under section 8; or

(C) a company or body corporate governed by any special Act.

Turnover – not more than Rs. 2 crores.

• Should not be – Section 8 company

– Holding or a Subsidiary company

(a) is not a private company;

(b) has a minimum paid-up share capital, as may be prescribed:

• Is not a private company (Articles do not have the restricting clauses).

• No minimum paid up capital requirement.

• Maximum numbers of members – No limit.

According to section 3(1)(a), a company may be formed for any lawful purpose by seven or more persons, where the company to be formed is to be a public company.

3. On the basis of control:

A company is a holding company in relation to one or more other companies, means a company of which such companies are subsidiary companies. [Section 2(46)]

(i) controls the composition of the Board of Directors; or

(ii) exercises or controls more than one-half of the total share capital either at its own or together with one or more of its subsidiary companies:

[Yet to be notified]

For the purposes of this section —

(II) the composition of a company’s Board of Directors shall be deemed to be controlled by another company if that other company by exercise of some power exercisable by it at its discretion can appoint or remove all or a majority of the directors;

(IV) “layer” in relation to a holding company means its subsidiary or subsidiaries.

Example 1: A will be subsidiary of B, if B controls the composition of the Board of Directors of A, i.e., if B can, without the consent or approval of any other person, appoint or remove a majority of directors of A.

Example 2: A will be subsidiary of B, if B holds more than 50% of the share capital of A.

(b) Associate company [Section 2(6)]: In relation to another company, means a company in which that other company has a significant influence, but which is not a subsidiary company of the company having such influence and includes a joint venture company.

The term “significant influence” means control of at least 20% of total share capital, or of business decisions under an agreement. [Section 2(6)]

The term “Total Share Capital”, means the aggregate of the -

This is a new definition inserted in the 2013 Act.

Vide General Circular no. 24/2014 dated 25th of June 2014, the Ministry of Corporate Affairs has clarified that the shares held by a company in another company in a ‘fuduciary capacity’ shall not be counted for the purpose of determining the relationship of ‘associate company’ under section 2(6) of the Companies Act, 2013.