The document Classical and Quantum Statistics (Part - 1) - CSIR-NET Physical Sciences Physics Notes | EduRev is a part of the Physics Course Physics for IIT JAM, UGC - NET, CSIR NET.
All you need of Physics at this link: Physics 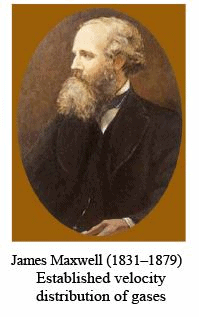 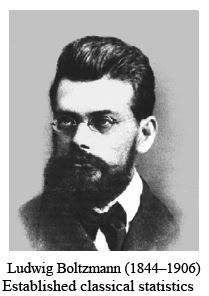 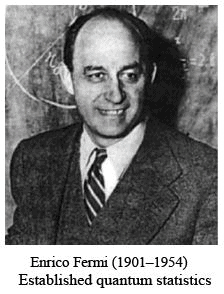 Consider a large number N of free classical particles such as atoms, molecules or electrons which are kept at a constant temperature T, and which interact only weakly with one another. The energy of a single particle consists of kinetic energy due to translatory motion and an internal energy for example due to rotations, vibrations, or orbital motions of the particle. In the following we consider particles with only kinetic energy due to translatory motion. The particles of the system can assume an energy E, where E can be either a discrete or a continuous variable. If Ni particles out of N particles have an energy between Ei and Ei + dE, the probability of any particle having any energy within the interval Ei and Ei + dE is given by

where f(E) is the energy distribution function of a particle system. In statistics, f(E) is frequently called the probability density function. The total number of particles is given by

where the sum is over all possible energy intervals. Thus, the integral over the energy distribution function is

In other words, the probability of any particle having an energy between zero and infinity is unity. Distribution functions which obey

of a single particle is obtained by calculating the total energy and dividing by the number of particles, that is

(13.6) The average velocity and the average energy are related by

and is the velocity corresponding to the average energy

In analogy to the energy distribution we assume that Ni particles have a velocity within the interval vi and vi + dv. Thus,

where f(v) is the normalized velocity distribution. Knowing f(v), the following relations allow one to calculate the mean velocity, the mean square velocity, and the root-mean-square velocity

Since Σi Ni  =  N, the velocity distribution function is normalized, i. e.

The average of a specific propagation direction, for example vx is evaluated in analogy to Eqs. (13.11 – 13). One obtains

In a closed system the mean velocities are zero, that is

. However, the mean square velocities are, just as the energy, not equal to zero.

Ideal gases of atoms and electrons

The basis of classical semiconductor statistics is ideal gas theory. It is therefore necessary to make a small excursion into this theory. The individual particles in such ideal gases are assumed to interact weakly, that is collisions between atoms or molecules are a relatively seldom event. It is further assumed that there is no interaction between the particles of the gas (such as electrostatic interaction), unless the particles collide. The collisions are assumed to be (i) elastic (i. e. total energy and momentum of the two particles involved in a collision are preserved) and (ii) of very short duration. 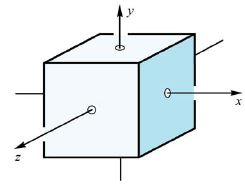 Next, the pressure P and the kinetic energy of an individual particle of the gas will be calculated. For the calculation it is assumed that the gas is confined to a cube of volume V, as shown in Fig. 13.1. The quantity of the gas is assumed to be 1 mole, that is the number of atoms or molecules is given by Avogadro’s number, NAvo = 6.023 × 1023 particles per mole. Each side of the cube is assumed to have an area A = V 2/3. If a particle of mass m and momentum m vx (along the x-direction) is elastically reflected from the wall, it provides a momentum 2 m vx  to reverse the particle momentum. If the duration of the collision with the wall is dt, then the force acting on the wall during the time dt is given by

(13.20) where the momentum change is dp = 2 m vx. The pressure P on the wall during the collision with one particle is given by

. Consequently, the total pressure is obtained by integration over all positive velocities in the x-direction

Since the velocity distribution is symmetric with respect to positive and negative x-direction, the integration can be expanded from – ∞ to + ∞.

Since the velocity distribution is isotropic, the mean square velocity is given by

The pressure on the wall is then given by

The average kinetic energy of one single particle is obtained by division by the number of particles, i. e.

and the resulting kinetic energy is given by

Thus the kinetic energy of an atom or molecule is given by (1/2) kT. Equation (13.29) is called the equipartition law, which states that each ‘degree of freedom’ contributes (1/2) kT to the total kinetic energy.