(I) On the Basis of Ligands: Metal carbonyls can be classified into two categories

(b) Heteroleptic carbonyl complexes: The complexes in which a metal is bound to CO as well as other ligand such as PR3, PP3, NO etc. For example Ni(CO)3(PPh3), Mo(CO)3(PF3)3, etc.

Bonding in Metal Carbonyls CO is considered to be a good σ-donor as well as a π-acceptor ligand. This property of CO and the other π-acceptor ligands such as CN-, NO, C2H4 etc, can be explained b y the MO diagram of CO. 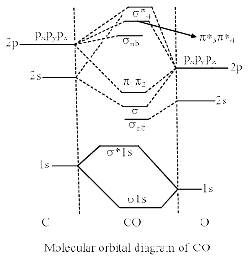 Carbon monoxide has two LUMO π* orbitals which are also localized on carbon. These orbitals have correct symmetry to overlap with non-bonding metal d-orbitals that have π symmetr y such as the t2g (dxy, dyz or dzx) orbitals in octahedral complex. A metal atom having electrons in a d-orbital of suitable symmetr y can donate electron density to the LUMO π* of CO. The π interaction leads to the delocalization of electrons from filled d-orbitals of suitable symmetry on the metal atom into the empty π* orbitals on the CO ligands, this donation is known as π back donation or back bonding and the CO ligand is said to be a strong π-acceptor.

Both the σ - and π-bonding reinforce each other. The formation of s-bond results in the increase in electron density on metal and tends to make the CO ligand positive. Both the increase in electron density on the metal, and the positive charge on CO increase the p-accepting ability of CO. The greater electron density on the metal and greater partial positive charge on CO ligand make the effective return of electron densit y from metal d-orbital to the π* orbital of CO ligand. As the delocalized electron density increases from metal d-orbital to π* orbitals of CO, further electron flow from CO to metal dorbital results. The result of this two way electron flow is that the metal-ligand bond is stronger than the sum of isolated to metal s-bonding and metal to ligand p-bonding effects. This kind of mutual strengthening of σ-and π-bonding is called synergism and this effect is called synergistic effect.The metal to ligand p back bonding results in the increase in M—C bond strength as the bond order tends to increase. Since the p-back bonding results in occupation of π* on CO ligand, the bond order of CO ligand itself decreases and, therefore, the C—O bond becomes and weaker. Alternatively, increased M—C double bonding leads to decreases C—O multiple bonding as shown by the resonance structure.

If a metal is in high oxidation state, then there will be poor p-back bonding and the bond order of M—C is close to 1 and that of C—O is close to 3.

If the metal is in low oxidation state, then there will be strong p-bonding between metal and CO and the bond order of both M—C and C—O is close to 2.

(2) Number of CO Ligands: Generally greater the number of CO ligand around the central metal atom lesser will be stretching frequency of C—O bond due to increasing of formal negative charge on metal.

(3) Presence of the Other Ligand on Metal: Greater the donation tendency of electron density and lesser the accepting tendency of electron density lesser will be the stretching frequency of C—O bond and greater will be the stretching frequency of M—C bond due to increasing of formal negative charge on metal.

The ionic clusters of main group elements are called Zintl ions. Since these ions have no ligand, these are also known as nacked clusters.e.g. Pb52- , Bi33- , Sn52- , Bi53+ , Te62+ , etc.Zintl ions are also classified into closo, nido, arachno and hypho clusters.If total number of valance electrons follows the pattern

Where n = number of metal atoms in the Zintl ion