Even and Odd Signals

A signal is said to be even if it satisfies the following condition;

Time reversal of the signal does not imply any change on amplitude here. For example, consider the triangular wave shown below.

The triangular signal is an even signal. Since, it is symmetrical about Y-axis. We can say it is mirror image about Y-axis.

Consider another signal as shown in the figure below. 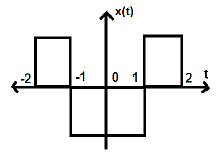 We can see that the above signal is even as it is symmetrical about Y-axis.

A signal is said to be odd, if it satisfies the following condition

In the figure above, we can see a step signal x(t). To test whether it is an odd signal or not, first we do the time reversal i.e. x(-t) and the result is as shown in the figure. Then we reverse the amplitude of the resultant signal i.e. –x(-t) and we get the result as shown in figure.

If we compare the first and the third waveform, we can see that they are same, i.e. x(t)= -x(-t), which satisfies our criteria. Therefore, the above signal is an Odd signal.

Some important results related to even and odd signals are given below.

Representation of any signal into even or odd form

Some signals cannot be directly classified into even or odd type. These are represented as a combination of both even and odd signal.

Find the even and odd parts of the signal

Solution − From reversing x(n), we get

Now, according to formula, the even part

Similarly, according to formula the odd part is\ 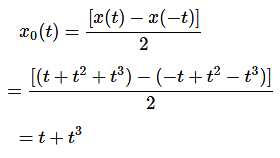 Periodic signal repeats itself after certain interval of time. We can show this in equation form as −

Fundamental time period (FTP) is the smallest positive and fixed value of time for which signal is periodic.

A triangular signal is shown in the figure above of amplitude A. Here, the signal is repeating after every 1 sec. Therefore, we can say that the signal is periodic and its FTP is 1 sec.

Simply, we can say, the signals, which are not periodic are non-periodic in nature. As obvious, these signals will not repeat themselves after any interval time.

Non-periodic signals do not follow a certain format; therefore, no particular mathematical equation can describe them.

A sinusoidal AC current signal is a perfect example of Energy type signal because it is in positive half cycle in one case and then is negative in the next half cycle. Therefore, its average power becomes zero.

A lossless capacitor is also a perfect example of Energy type signal because when it is connected to a source it charges up to its optimum level and when the source is removed, it dissipates that equal amount of energy through a load and makes its average power to zero.

For any finite signal x(t) the energy can be symbolized as E and is written as;

In mathematical form, the power of a signal x(t) can be written as;

Difference between Energy and Power Signals

The following table summarizes the differences of Energy and Power Signals.

Example 1 − Find the Power of a signal

Solution − The above two signals are orthogonal to each other because their frequency terms are identical to each other also they have same phase difference. So, total power will be the summation of individual powers.

Example 2 − Test whether the signal given

is conjugate or not?

Solution − Here, the real part being t2 is even and odd part (imaginary) being sintsin⁡t is odd. So the above signal is Conjugate signal.

Example 3 − Verify whether X(t)=sinωt is an odd signal or an even signal.

By time reversal, we will get sin(−ωt)

This is satisfying the condition for a signal to be odd. Therefore, sinωt is an odd signal.

Even and Odd Signals

A signal is said to be even or symmetric if it satisfies the following condition; 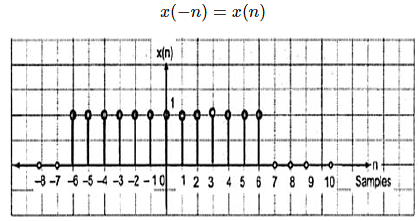 A signal is said to be odd if it satisfies the following condition; 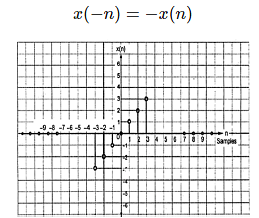 A discrete time signal is periodic if and only if, it satisfies the following condition −

Here, x(n) signal repeats itself after N period. This can be best understood by considering a cosine signal −

For the signal to become periodic, following condition should be satisfied;

is an integral multiple of 2π

Frequencies of discrete sinusoidal signals are separated by integral multiple of 2π.

Energy of a discrete time signal is denoted as E. Mathematically, it can be written as;

Average power of a discrete signal is represented as P. Mathematically, this can be written as;

Here, power is finite i.e. 0<P<∞. However, there are some signals, which belong to neither energy nor power type signal.