A matter is said to be solid when its constituent particles (atoms, molecules, or ions) are closely packed. A solid is also defined as that form of matter which possesses rigidity and hence possesses a definite shape and a definite volume. Unlike gases and liquids, whose fluidity is determined by the relative free motion of their molecules, in solids, on the contrary, molecules or atoms or ions are not free to move but can oscillate around their fixed positions due to strong intermolecular or inter-atomic, or inter-ionic forces. This confers rigidity and long-range order in solids. 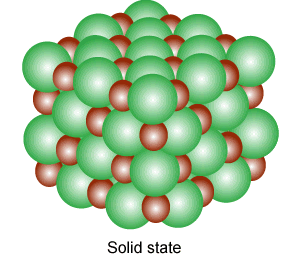 We shall find that the explanation of these macroscopic properties in terms of the atomic theory involves the idea of lattice: a permanent ordered arrangement of atoms held together by forces of considerable magnitude. Thus the extremes of molecular behavior occur in gases and solids. In the former, we have molecular chaos and vanishing inter-molecular forces, and in the latter, we have an ordered arrangement in which the interatomic forces are large.

Types of Solids:a) Crystalline solids: In a single crystal the regularity of arrangement of the pattern extends throughout the solid and all points are completely equivalent.

b) Amorphous solids: An amorphous solid differs from a crystalline substance in being without any shape of its own and has a completely random particle arrangements, i.e. no regular arrangement.

Distinction Between Crystalline and Amorphous Solids DiamondsThe structure of diamond is shown at the right in a "ball-and-stick" format. The balls represent the carbon atoms and the sticks represent a covalent bond. Be aware that in the "ball-and-stick" representation the size of the balls do not accurately represent the size of carbon atoms. In addition, a single stick is drawn to represent a covalent bond irrespective of whether the bond is a single, double, or triple bond or requires resonance structures to represent. In the diamond structure, all bonds are single covalent bonds ( σ  bonds). The "space-filling" format is an alternate representation that displays atoms as spheres with a radius equal to the van der Waals radius, thus providing a better sense of the size of the atoms. 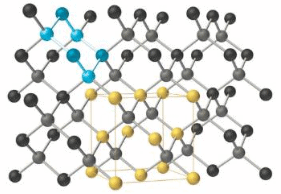 Notice that diamond is a network solid. The entire solid is an "endless" repetition of carbon atoms bonded to each other by covalent bonds. (In the display at the right, the structure is truncated to fit in the display area.)

GraphiteThe most stable form of carbon is graphite. Graphite consists of sheets of carbon atoms covalently bonded together. These sheets are then stacked to form graphite. Figure shows a ball-and-stick representation of graphite with sheets that extended "indefinitely" in the xy plane, but the structure has been truncated for display purposed. Graphite may also be regarded as a network solid, even though there is no bonding in the z direction. Each layer, however, is an "endless" bonded network of carbon atoms. FullerenesUntil the mid 1980's, pure carbon was thought to exist in two forms: graphite and diamond. The discovery of C6O molecules in interstellar dust in 1985 added a third form to this list. The existence of C6O, which resembles a soccer ball, had been hypothesized by theoreticians for many years. In the late 1980's synthetic methods were developed for the synthesis of C6O, and the ready availability of this form of carbon led to extensive research into its properties. Fig: Example of fullerenes: a buckyball C C60 and an extended bucktube.

The document Classification of Solids: Amorphous & Crystalline 2 - Notes - JEE is a part of JEE category.
All you need of JEE at this link: JEE
Attempt Now