(i) Close packing in two dimension: There are two ways to build a crystal plane

(a) Spheres are packed in a such a way that the rows have a horizontal as well as vertical alignment. In this arrangement, the spheres are found to form square. This type of packing is also called square close packing.The number of spheres which are touching a given sphere is called the co-ordination number. Thus, the coordination number of each sphere in (a) is four.

(b) The spheres are packed in such a way t hat the spheres in the second row are placed in the depressions between the spheres of the first row and so on. This gives rise to hexagonal close packing of spheres and the coordination number of each sphere is six. 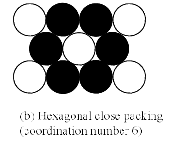 (ii) Close packing in three dimensions: It is clear from the figure (a) that there are two types of voids or hollows in the first layer. These are marked as b and c. All the hollows are equivalent but the sphere of second layer may be placed either on hollows which are marked b or on the other set of hollows marked c. It may be noted that it is not possible to place spheres on both types of hollows so the second la yer is indicated as dotted in circles in figure b.When a third layer is to be added, again there two types of hollows available. One type of hollows marked ‘a’ are unoccupied hollows of the first layer. The other types of hollows are hollows in the second layer (marked c). Thus, there are two alternatives to build the layer.

(i) When the third layer is placed over the second layer so as to cover the tetrahedral or ‘c’ voids, a three – dimensional closest packing is obtained where t he spheres in ever y third layer are vertically aligned to the first layer. This arrangement is called ABAB......... pattern or hexagonal (HCP) close packing (calling first layer as A and second layer B).

(a) For CCP geometry coordination number = 12

(c) For CCP geometry packing efficiency = 74% (as calculated before) In the close packing of spheres, certain hollows are left vacant. These holes or voids in the crystals are called interstitial sites or interstitial voids.

In ionic crystals, the coordination numbers as well as the geometrical shapes of the crystals depend mainly on the relative sizes of the ions. The ration of the radii of the positive and negative ions is called radius ratio.