The square of the Standard Deviation is known as Variance.

Note : The coefficient of variation is also known as coefficient at variability. It is expressed as percentage.

Example 56: An analysis of the monthly wages paid to workers in two firms, A and B, belonging to the same industry gives the following results :

∴ Firm B has greater variability, as its coefficient of variation is greater than that of Firm A 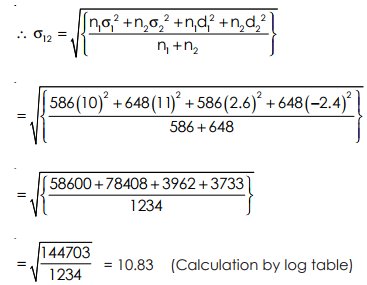 Find the candidates weighted mean percentage weighted of 3, 4, 4, 5 and 2 respectively are allotted of the subject. Find also the coefficient of variation. Putting these values of f1 and f2 we find the following distribution: 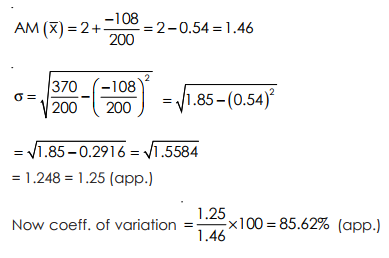 Advantages of Standard Deviation :
1. Standard deviation is based on all the observations and is rigidly defined.
2. It is amenable to algebraic treatment and possesses many mathematical properties.
3. It is less affected by fluctuations of sampling than most other measures of dispersion.
4. For comparing variability of two or more series, coefficient of variation is considered as most appropriate and this is based on standard deviation and mean.

Disadvantages of Standard Deviation :
1. It is not easy to understand and calculate.
2. It gives more weight to the extremes and less to the items nearer to the mean, since the squares of the deviations of bigger sizes would be proportionately greater than that which are comparatively small. The deviations 2 and 6 are in the ratio of 1 : 3 but their squares 4 and 36 would be in the ratio of 1 : 9.

Uses of Standard Deviation : It is best measure of dispersion, and should be used wherever possible.