Coal composition is denoted by rank. Rank increases with the carbon content and decreases with increasing oxygen content.

Many of the products made by hydrogenation, oxidation, hydrolysis or fluorination are important for industrial use. Stable, low cost, petroleum and natural gas supplies has arose interest in some of the coal products as upgraded fuels to reduce air pollution as well as to take advantage of greater ease of handling of the liquid or gaseous material and to utilize existing facilities such as pipelines and furnaces.

Raw material is Bituminous coal. It appears to have specific internal surfaces in the range of 30 to 100m2/g. 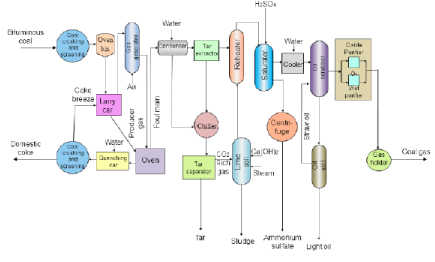 (a) Coal crusher and screening:

1. What are the by-products obtained from coking of coal?

2. Why two Tar separators are there in the process flow sheet?

Ans: The coke oven gases entering the condenser separate as two separate streams namely a liquid phase and a gaseous phase.  Due to phase equilibrium limitations, tar gets distributed to both these streams. Therefore, tar separation is carried out for both these streams.Such processing steps are very common in many chemical processing unit.  The complexity of the process flow sheet is governed by the difficulty in achieving perfect separation of components such as tar in either liquid or gaseous streams.  These components which distributed evenly between liquid and gaseous streams require additional processing such as utilization of two separators.

3. What is the prime function of Larry and Quenching car ?

Ans: Since large quantities of coke enter and leave the oven, Larry and Quenching Car carry out these operations of automated entry and exit of the raw material and product respectively.  While Larry car operation is relatively easy, it is not the case of quenching car, as water quenching is additionally required along with the removal of the product from the coke oven.

33.1 Introduction to  Hydrogenation of Coal

This is highly exothermic reaction. 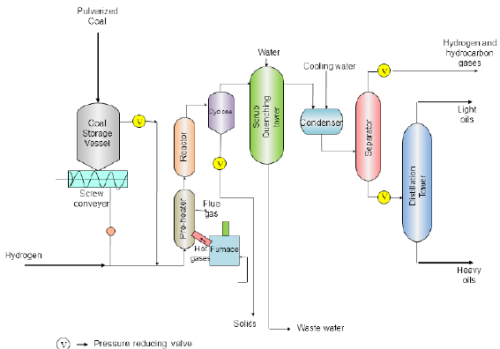 1. What are the various ways for coal to be fed to hydrogenation process?.

Ans: The following are the various alternatives:

2. Why is a cyclone separator required in the process?

Ans: A cyclone separator enables the separation of finer solids that are entrained in the gaseous mixture.  If the cyclone separator is not used, then eventually the coal enters the waste stream and would also pose more environmental risks in addition to the loss of valuable raw material.

3. In the changing energy scenarios of the world, in what way hydrogenation of coal is beneficial ?

Ans: Coal hydrogenation is a potential route to transform coal into other usable compounds such as methane, benzene and aromatics.  Methane otherwise can be converted to an equivalent liquefied natural gas (LNG) for fuel usage in various automobiles.  Therefore, the hydrogenation of coal if carried out in a cost effective way can be a very important technology to explore when world petroleum reserves reduce drastically.