The document Colligative Properties (Part-2) Chemistry Notes | EduRev is a part of the Chemistry Course Physical Chemistry.
All you need of Chemistry at this link: Chemistry

Here we consider only properties which result from the dissolution of nonvolatile solute in a volatile liquid solvent. They are essentially solvent properties which are changed by the presence of the solute. The solute particles displace some solvent molecules in the liquid phase and therefore reduce the concentration of solvent, so that the colligative properties are independent of the nature of the solute. The word colligative is derived from the Latin colligatus meaning bound together.

For a given solute-solvent mass ratio, all colligative properties are inversely proportional to solute molar mass.

Measurement of colligative properties for a dilute solution of a non-io nized solute such as urea or glucose in water or another solvent can lead to determinations of relative molar masses, both for small molecules and for polymers which cannot be studied by other means. Alternatively, measurements for ionized solutes can lead to an estimation of the percentage of dissociation taking place.

Colligative properties are mostly studied for dilute solutions, whose behavior may often be approximated as that of an ideal solution.

12. Lowering of Vapour Pressure by a Non-volatile Solute 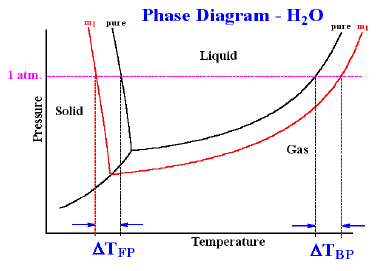 This is one of the statements of the Raoult’s law.

Since mole fraction of the solute, X2 is given by n(N + n), Equation (3) may be expressed as

Determination of Molar Masses from Lowering of Vapour Pressure

It is possible to calculate molar masses of non-volatile non-electrolytic solute by measuring vapour pressure of their solutions.

Since in dilute solute, n is very small as compared to N, equation (5) may be put in the approximate form as

Alternatively, we can derive the relation without taking any approximations.

Example: The density of a 0.438 M solution of potassium chromate at 298 K is 1.063 g cm–3. Calculate the vapour pressure of water above this solution.

Amount of water in 1 L of solution M: molality of the solution

14. Depression of Freezing Point by a Non-Volatile Solute

Freezing point is the temperature at which solid and liquid states of a substance have the same vapour pressure. It is observed that the freezing point of the solution (Tf) containing non volatile solute is always less than the freezing po int of the pure solvent (T°f). Thus Tf° - Tf = ΔTf . It can be seen that ΔTf  ∝ molality

That, is freezing po int depression of a dilute solution is directly proportional to the number of moles of the solute dissolved in a given amount of the solvent and is independent of the nature of solute.

M: Molality of the solution

Where m1 = molecular weight of solute and w and W are weights of so lute and solvent. Kf is characterist ic of a solvent and can be calculated as follows.

where Lf = Latent heat of fusion and Tf = Freezing temperature in K scale. 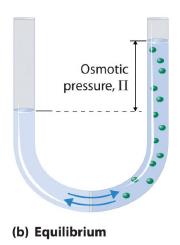 Where π = Osmot ic pressure, V = volume of solution, n = no. of moles of solute that is dissolved R = Gas constant, T = Absolute temperature

A pair of solutions having same osmotic pressure are called isotonic solutions.

Example: Calculate the osmotic pressure of sucrose solution containing 1.75 gms in 150 ml of solution at 17°C.

Solution: We know that

Since Colligative properties depend upon the number of particles of the solute, in some cases where the solute associates in solution, abnormal results for molecular masses are obtained.

(ii) Association: There are many organic solutes which in non-aqueous solutions undergo association, that is two or more molecules of the solute associate to form a bigger molecule. Thus, the number of effective molecules decreases and consequently the osmotic pressure, the elevation of boiling point or depression of freezing point, is less than that calculate on the basis of a single molecule. Two example are: acetic acid in benzene and chloroacetic acid in naphthalene.

Association of Acitic acid in benzene through hydrogen bonding.

(iii) Degree of Association: It is the fraction of the total number of molecules which combine to form bigger molecule. Consider one mole of solute dissolved in a given volume of solvent. Suppose n simple molecule combine to form an associated molecule.

Let α be the degree of association, then

The number of unassociated moles = 1 – a

The number of associated moles = α/n

(iv) Dissociation: Organic acids, and salts in aqueous solutions undergo dissociation, that is, the molecules break down into positively and negatively charged ions. In such cases, the number of effective particles increases and, therefore, osmotic pressure, elevation of boiling point and depression of freezing point are much higher than those calculated on the basis of an undissociated single molecule.

Then the number of moles of KCl left undissociated will be 1 – α. At the same time, α moles of K+ ions and α moles of Cl- ions will be produced, as shown below.

Since, as already, mentioned, osmotic pressure, vapour pressure lowering, boiling point elevation or freezing point depressions way very inversely as the molecules weight of the solute, if follows that,

Knowing, the observed mo lar mass and the Van’t Hoff factor, i, the degree of dissociat ion, a can be easily calculated.

Now, if we include Van’t Hoff factor in the formulae for Colligative properties, we obtain the normal results:

Note:  The value of i is taken as one when solute is non electrolyte.