These current and voltage fix the Q point. The ac equivalent circuit is obtained by reducing all dc sources to zero and shorting all coupling capacitors. r'e represents the ac resistance of the diode as shown in Fig. 2

Fig. 3, shows the diode curve relating IE and VBE. In the absence of ac signal, the transistor operates at Q point (point of intersection of load line and input characteristic). When the ac signal is applied, the emitter current and voltage also change. 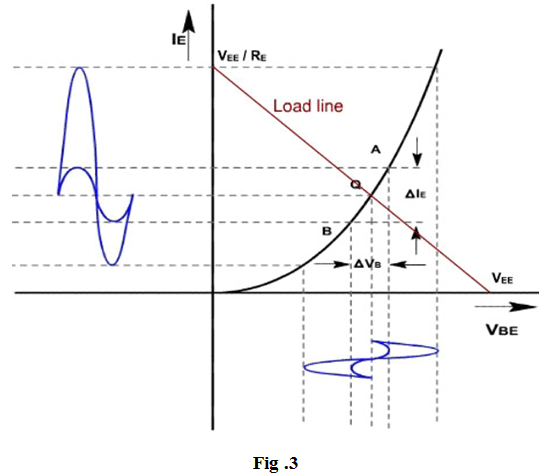 If the ac signal is small, the points A and B are close to Q, and arc A B can be approximated by a straight line and diode appears to be a resistance given by

r'e is the ratio of ΔVBE and ΔIE and its value depends upon the location of Q. Higher up the Q point, smaller will be the value of r'e because the same change in VBE produces large change in IE. The slope of the curve at Q determines the value of r'e. From calculation it can be proved that.

In general, the current through a diode is given by

Where q is the charge on electron, V is the drop across diode, T is the temperature and K is a constant.

On differentiating w.r.t V, we get,

Since the ac input voltage source is connected across r'e. Therefore, the ac emitter current is given by 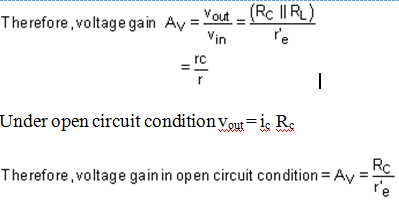 Find the voltage gain and output of the amplifier shown in fig. 4, if input voltage is 1.5mV. 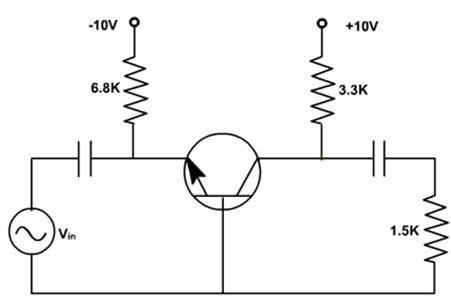 The ac equivalent circuit with ac source resistance is shown in fig. 5.

The emitter ac current is given by

Therefore, voltage gain of the amplifier =

CE amplifiers are very popular to amplify the small signal ac. After a transistor has been biased with a Q point near the middle of a dc load line, ac source can be coupled to the base. This produces fluctuations in the base current and hence in the collector current of the same shape and frequency. The output will be enlarged sine wave of same frequency.

The amplifier is called linear if it does not change the wave shape of the signal. As long as the input signal is small, the transistor will use only a small part of the load line and the operation will be linear.

On the other hand, if the input signal is too large the fluctuations along the load line will drive the transistor into either saturation or cut off. This clips the peaks of the input and the amplifier is no longer linear.

The CE amplifier configuration is shown in fig. 1 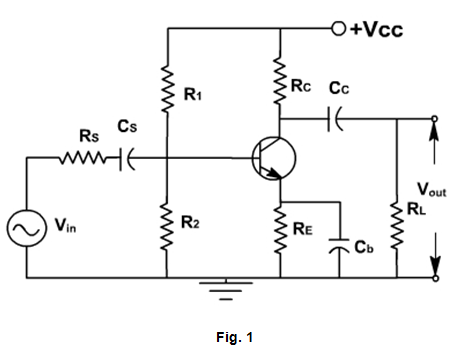 The coupling capacitor (CC ) passes an ac signal from one point to another. At the same time it does not allow the dc to pass through it. Hence it is also called blocking capacitor. 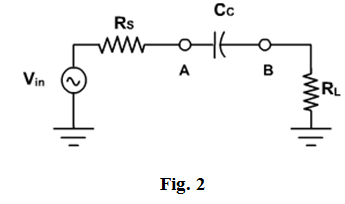 decreases, and current increases until it reaches to its maximum value  Vin / R. Therefore the capacitor couples the signal properly from A to B when XC<< R. The size of the coupling capacitor depends upon the lowest frequency to be coupled. Normally, for lowest frequency XC < 0.1R is taken as design rule.

The coupling capacitor acts like a switch, which is open to dc and shorted for ac.

The bypass capacitor Cb is similar to a coupling capacitor, except that it couples an ungrounded point to a grounded point. The Cb capacitor looks like a short to an ac signal and therefore emitter is said ac grounded. A bypass capacitor does not disturb the dc voltage at emitter because it looks open to dc current. As a design rule XCb < 0.1RE  Analysis of CE amplifier:

For dc equivalent circuit, reduce all ac voltage sources to zero and open all ac current sources and open all capacitors. With this reduced circuit shown in fig. 3 dc current and voltages can be calculated. 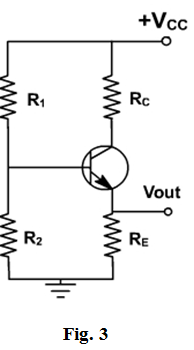 For ac equivalent circuits, reduce dc voltage sources to zero and open current sources and short all capacitors. This circuit is used to calculate ac currents and voltage as shown in fig. 4. 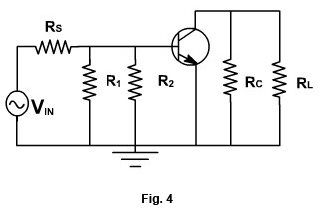 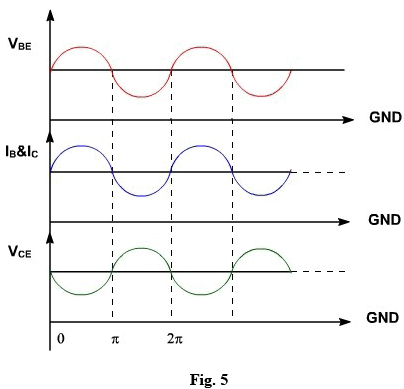 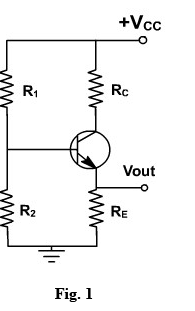 Assuming IC = ICE(approx), the output circuit voltage equation can be written as

The slop of the d.c load line is .

condition, Q-point is not in the middle of load line, therefore Q-point is selected slightly upward, means slightly shifted to saturation side. 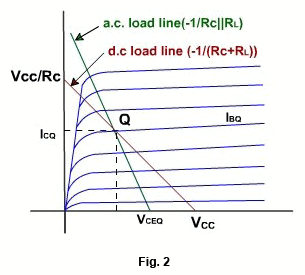