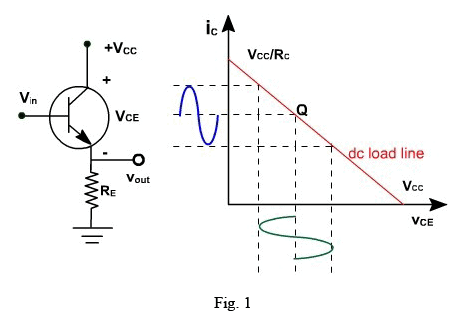 Since vout follows exactly the vin therefore, there is no phase inversion between input and output.

The output circuit voltage equation is given by-

Fig. 2, shows an emitter follower driven by a small ac voltage. The input is applied at the base of transistor and output is taken across the emitter resistor. Fig. 3, shows the ac equivalent circuit of the amplifier. The emitter is replaced by ac resistance r'e. 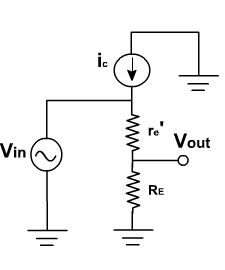 The ac output voltage is given by

Therefore, it is a unity gain amplifier. The practical emitter follower circuit is shown in Fig. 4 The ac source (vS) with a series resistance RS drives the transistor base. Because of the biasing resistor and input impedance of the base, some of the ac signal is lost across the source resistor. The ac equivalent circuit is shown in Fig. 5.

The input impedance at the base is given by 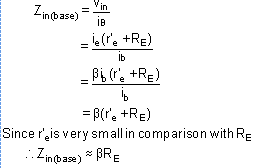 Since  RE is very large as compared to R1 and R2. 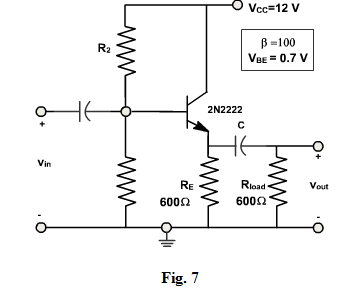 We first find the Thevenin's equivalent of the base bias circuitry.

From the bias equation we have

Find the output voltage swing of the circuit of fig. 7.

The Q-Point location has already been calculated in Example-1. We found that the quiescent collector current is 4.95 mA.

This is less than the maximum possible output swing. Continuing the analysis,

The load lines for this problem are shown in Fig. 8. 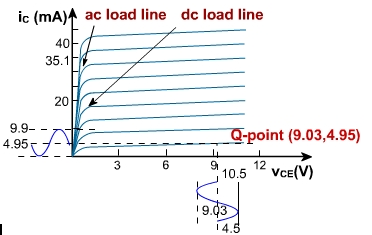