The acid-catalyzed reactions of aldehydes, ketones, and carboxylic acids with hydrogen azide occur with rearrangement upon a dehydration process. This reaction is frequently coined "Schmidt rearrangement" (K. F. Schmidt, 1923). Of such reactions, only that of the ketone is illustrated here in equation (35) to show the commonly accepted mechanism. In case of a carboxylic acid substrate, the amine is the final product resulting from a decarboxylation.

The evidence of a carbocation intermediate is provided from the fact that tetrazoles have been isolated as side products [79]. On the other hand, the migrating group in Schmidt
rearrangement retains its chirality. Moreover, the bulkier group, regardless of its nature, has been found to be the favored group for the migration in case of a ketone substrate.

In 1899 A. Baeyer and V. Villiger discovered that the ketones can be converted to esters using peracids as oxidizing agents [80]. This reaction is renowned under "Baeyer-
Villiger oxidation" in which a rearrangement is brought about, equation (36). The mechanism for this rearrangement was proposed by R. Criegee, a well-versed authority in oxidation reactions. The results of the oxidation of 18O-labeled benzophenone have strongly endorsed the fact that the second step is rate-determining. In this study, the result revealed that phenylbenzoate retains the labeled oxygen in the carbonyl group. Other evidence of the proposed rate-determining step stems from the kinetic studies of the oxidation of substituted acetophenones by CF3COOOH . In this case, the plot of the rate constant versus σ (logk vs. σ) was found to be consistent with Hammettís equation with a negative ρ (ρ = - 1.45) suggesting a positive charge development at the transition state. (Hammett equation, logk/k0 = ρσ).

Other studies were undertaken on the oxidation of aryl alkyl ketones to reveal the migratory aptitude of different groups. The results led to the following decreasing order in the
migrating ability: t-alkyl > cyclohexyl > sec-alkyl > benzyl > phenyl > primary alkyl > cyclopropyl > methyl . The point that the bulkier group migrates readily is useful in
the synthesis of bridgehead alcohols.

Cumyl hydroperoxide, under acidic conditions, undergoes rearrangement similar to to Baeyer-Villigerís. This example is actually an industrial application of the reaction to produce both phenol and acetone from cumyl hydroperoxide [20b]. As in Beckmann rearrangement, the Baeyer-Villiger oxidation is best applied in the synthesis of ε-caprolactone (usually in high yield) which can be polymerized to polyester via either an anionic or a cationic ring-opening polymerization .

It has been known that Baeyer-Villiger reaction could not take place via an asymmetric synthesis, however, an enzymatic pathway has made it very plausible. Indeed, Walsh and Chen reported that flavin monoxygenase, found in some types of Acinetobacter , is capable to catalyze this reaction .

Besides his valuable oxidation of α-glycol compounds by lead tetraacetate, R. Criegee has further enriched the organic chemistry with a rearrangement of one of his oxidized
products. Indeed, in 1944 he noticed that the trans-9-decalyl peroxyesters rearrange on standing to 1,6-epoxycyclohexyl esters as traced in equation (38) .

Criegee extended his work and brought experimental evidence of the existence of the intimate ion pair shown in the above equation through studies on the polarity medium of the rearrangement . It is therefore an ionic rearrangement rather than a radical one as might be expected. Later, Winstein looked over the possible anchimeric assistance to the departure of the leaving group in this rearrangement. He worked on 2-R-2-propyl-p-nitroperoxybenzoates (R is the migrating group) and found that the more electron-releasing R is, the greater is its migratory ability. In Table 1, a summary of the results on the relative rates on the ionic dissociation of 2-R-2-propylperoxypenzoates (φ stands for phenyl group) is provided. It can be deduced from these results that the rate is tightly bound to the donation ability of R and, therefore, the transition can be pictured as 3 in which the anchimeric assistance of R is shown .

In the ozonolysis of unsaturated compounds the instantaneous conversion of the very unstable and exploding primary ozonide to the relatively more stable final ozonide occurs
almost in the same mechanistic fashion as the Criegee rearrangement.

In pericyclic reactions the term ìsigmatropic shiftî or "sigmatropic rearrangement" is better suited than rearrangement. That is, a hydrogen atom or an alkyl is shifted
intramolecularly to a π bond and the shift is usually brought about thermally or photochemically. On the basis of the Woodward-Hoffmann theory , a sigmatropic shift as
pictured in

is always designated as [n, m] where n and m stand for the initial and the final positions of attachment of the moving bond ends. For instance, a [1,2] sigmatropic shift means that one end of the bond remains attached to its initial site while the other end migrates to the adjacent bond. 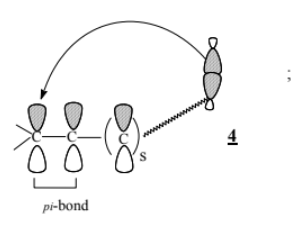 Though many sigmatropic shifts are well known and well studied such as the allylic system, the [3,3] rearrangement is probably the most interesting as far as the synthesis is
concerned. A general picture of this shift is outlined in equation (39) where X may be a carbon, oxygen, sulfur, or nitrogen atom. We speak about Cope rearrangement when X is a carbon and Claisen rearrangement when it is an oxygen.

The Cope rearrangement holds its prestige as one of the best applications of the Woodward-Hoffmann pericyclic rules. As a recall, this rearrangement was discovered prior to the development of the pericyclic chemistry by Roald Hoffmann and Robert Woodward, the nobelized chemists. According to this chemistry, the Cope rearrangement is a [3,3] sigmatropic shift. It customarily occurs for both cyclic and acyclic 1,5-dienes as illustrated in equations (40) and (41).

Cope rearrangement is usually a reversible reaction, thus, the final equilibrium position depends strongly on the stability difference between the starting material and the
product. Thermodynamic studies of the sigmatropic shift of this kind are in accord with a concerted mechanism [94]. The most probable chair-like transition state is conceived, but still a boat-like one may also be envisioned.

The Cope rearrangement proceeds frequently at elevated temperatures and, in some instances, up to 350°C. Doering and Roth have extensively investigated the Cope
rearrangement in a great deal of suitable molecules [94, 95]. They have shown that for strained compounds such as the cis-divinylcylopropane, a Cope rearrangement can be easily promoted at very low temperature, -40°C, as given in equation (42); the trans-isomer, however, is stable up until 190°C as noted. Surprisingly, upon applying this
divinylcyclopropane property to a related substance, the bicyclo [5.1.0] octa-2,5 diene

they found it very withstanding to Cope rearrangement up until 305°C without decomposition.

However, the degenerate Cope rearrangement has been conceived for the bullvalene by the same authors. These authors even stated that if each of the 10 CH groups of the
molecule were individually labeled, there would be 1,209,600 arrangements of the molecule, equation (43). Schroder shortly disclosed that the 1H NMR spectrum of its own bullvalene at 100°C revealed a magnificently sharp singlet peak which broadened into two bands at lower temperatures ; this result confirmed Doering's prediction.

first synthesized by Pettit , was found to undergo a degenerate Cope rearrangement similar to that of bullvalene by Gimarc and Zhao .

Transition metals such as PdCl2(CH3CN)2 have been found to be very efficient catalysts for the Cope rearrangement, and indeed, some compounds may undergo such rearrangement even at room temperature .

The Oxy-Cope rearrangement involves compounds with a hydroxyl group affixed to C-3 so that the rearranged product is an enol which tautomerizes to the keto form as outlined in equation (44) . The speed of this peculiar rearrangement can be enhanced by converting the alcohol to an alkylate and the reaction is therefore called anionic Oxy-Cope rearrangement. For instance, the alkylate of 1,5-hexadiene substituted at C-3 with OH rearranges by a factor of 1010 -1017, particularly when the alkylate anion is naked using a crown-ether to coordinate the counterion (K+ , Li+ , or Na+ ) .

A closely related Cope rearrangement is that of Claisen, a very early reported rearrangement (1912) . The starting material containing an oxygen atom in place of the C-3 may undergo a [3,3] sigmatropic shift, equation (39). The synthetic value of Claisen rearrangement is most appreciated in the allyl phenol synthesis often coined "Claisen
allylation" as depicted in equation (45).

A tandem Claisen ñ Diels- Alder reaction is that in which a Claisen rearrangement is followed by an intramolecular Diels-Alder reaction. It is employed in part in the multi-step
synthesis of the 11-deoxydaunomycinone

one of the most active antiobitic anthracyclines . The peculiarity of this reaction is the observed excellent regioselectivity (as indicated by an arrow) of the Claisen rearrangement when a meta-positioned acyl group is present in the benzene ring.

In tune with the plausible diradical intermediate

(see above) in Claisen and Cope rearrangements, these rearrangements can be accelerated by both electron-donating and electron-withdrawing groups in respect with the Dimroth principle. For aliphatic systems, the Claisen rearrangement is generally faster than Cope's; this is explained by the fact that the former rearrangement is an exothermic transformation while the latter one is almost thermoneutral.

In some aspects, Lewis acids have been found to catalyze Claisen rearrangement. Because the Brˆnsted acid-inducing Claisen rearrangement provides a polar change, it has been valorized in the field of negative resist design discussed above. The examples illustrated in equations (46) and (47) show a deprotection of the phenolic functionality by the acid-catalyzed Claisen rearrangement , thus a polarity increase is ensued.

The Claisen sigmatropic rearrangement has been extensively employed to realize small ring expansion. One of the latest work on this matter is the Tebbe methylenation of the
chloro-difluorovinyl-substituted lactone shown in equation (48) affording the corresponding ring expanded product upon heating at 85° C. It is worthwhile to mention that the fluoro substituents have an accelerating effect on the Claisen ring expansion.

Chorisimic acid is a key intermediate in the shikimate biosynthesis, which bacteria and fungi use to convert glucose-6-phosphate into primary and secondary metabolites. The
corresponding chorisimate undergoes a [3,3] sigmatropic rearrangement, not only thermally but also via an enzymatic route with chorisimate mutase, equation (51). For this peculiar feature, this chorisimate-prephenate Claisen rearrangement is considered to be a unique pericyclic process. The transition state is most probable as the one depicted with a structure similar to that of the compound

the most potent inhibitor known used to elicit the antibody hapten.