The document Complementary Set and Operations on Sets JEE Notes | EduRev is a part of JEE category.
All you need of JEE at this link: JEE

Some of the useful properties/operations on sets are as follows:

Idempotent Law: For any set A,

Identity Law: For any set A,

Commutative Law: For any two sets A and B

Associative Law: For any three sets A, B and C

Distributive Law: For any three sets A, B and C

De Morgan’s Law: For any two sets A and B

The set of all subsets of a given set A is called the power set A and is denoted by P(A).

Clearly, if A has n elements, then its power set P(A) contains exactly 2n elements.

The diagrams drawn to represent sets are called Venn 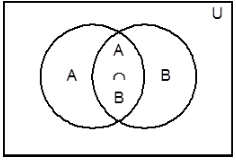 The diagrams drawn to represent sets are called Venn diagrams or Euler -Venn diagrams. Here we represent the universal set U by points within rectangle and the subset A of the set U represented by the interior of a circle. If a set A is a subset of a set B then the circle 1 representing A is drawn inside the circle representing B. If A and B are no equal but they have some common elements, then to represent A and B by two intersecting circles.

Illustration -: A class has 175 students. The following table shows the number of students studying one or more of the following subjects in this case

How many students are enrolled in Mathematics alone, Physics alone and Chemistry alone? Are there students who have not offered any one of these subjects?

Let a, b, c, d, e, f, g denote the number of elements ≤ students) contained in the bounded region as shown in the diagram then 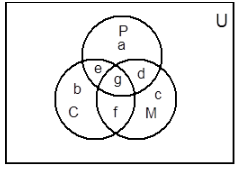