The document Complex Animals Chordata Class 9 Notes | EduRev is a part of the Class 9 Course Science Class 9.
All you need of Class 9 at this link: Class 9 Chordata is a phylum of triploblastic bilaterally symmetrical coelomate animals.

(i) Notochord (Gk. noton-back, chorde-cord) : It is a long rod-like structure that develops between dorsal nervous system and gut. Notochord functions as a support structure that provides points for attachment to muscles.

(ii) Dorsal Hollow Nerve Cord : It occurs above the notochord.

(iii) Pharyngeal Gill Slits (Gill Pouches) : They are paired respiratory structures which remain functional throughout life in fishes and some amphibians. In others they occur only in embryo.

1. Exclusively all are marine.

2. These are bilaterally symmetrical, triploblastic and coelomic animals.

3. They have a rod-like structure i.e. notochord at some stages during their lives.

4. Pharyngeal gill clefts are found throughout the life span.

5. They have a dorsal tubular nerve cord.

6. Protochordes may be grouped into following subphyla-

1. These animals possess a combination of nonchordate and chordate characters.

2. They are soft, unsegmented, worm like and bilateral symmetrical animals..

3. They have notochord as buccal diverticulum or stomochord in proboscis.

4. Body is divided into proboscis, collar and trunk. 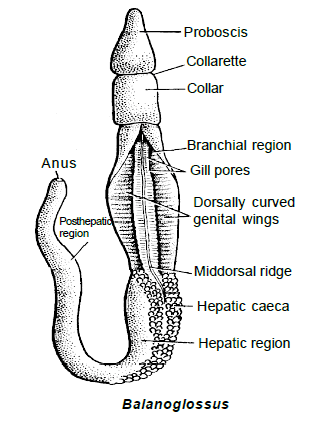 1. Notochord is present only in the tail of free living tadepole like larva

2. Adult members have test all over their body, made up of tunicin (just like cellulose).

2. In vertebrates notochord is replaced by vertebral column.

Vertebrata are grouped into five classes

2. They are exclusively water living animals.

3. Their body is streamlined and covered by scales.

4. They have paired fins for locomotion.

5. They respire through gills.

7. Their endoskeleton is made up of cartilage or bones.

8. They are unisexual and lay eggs.

9. They are cold blooded.

Fishes are of two types based on the nature of their endoskeleton. 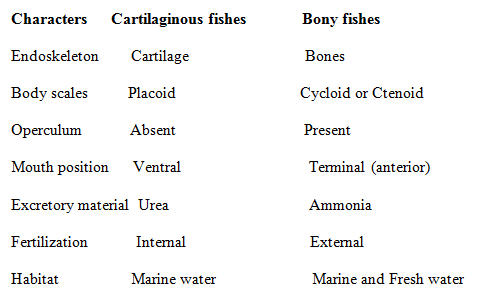 1. These are the first vertebrate which come out of water but these are not able to live on land permanently. These depend on water for their reproduction.

2. Their skin is smooth or rough, moist, slimy, glandular and without scales. To moist the skin numberous glands are found and skin having pigment cells (chromatophores) for colouration.

3. Notochord does not persist in adults.

4. Head and trunk distinct, tail may be present. 6. Three chambered heart has two auricles and one ventricle.

8. Excrete either ammonia (by tadepole) or urea (by adults)

9. They are cold-blooded animals. 1. First successful terrestrial animals but some are aquatic.

2. Body is divided into head, neck, trunk and tail.

4. Two pairs of pentadactyl limbs with incurved nails or claws

6. Heart is three chambered i. e. two auricles and an incompletely divided ventricle. Only crocodiles have four chambered heart.

7. One pair of metanephric kidneys, animals are uricotelic

9. These are mostly oviparous, eggs are cleidoic i.e. eggs are covered by a shell made up of calcium carbonate

10. These are cold blooded animals.

1. All types of birds are included in this class.

4. Hind-limbs bear four clawed digits and are adapted for walking and perching.

6. Endoskeleton is made up of hollow, air-filled bones, known as pneumatic bone.

9. Sound producing organ at the junction of trachea and bronchi of birds is calledsyrinx.

11. Fertilization internal. They are oviparous and lay large, eggs having hard shell.

12. They are warm-blooded animals. 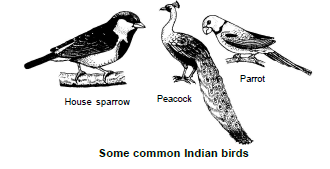 2. Body is divided into head, neck, trunk and tail with movable eyelids

3. Mammary glands are found in females for baby feeding.

4. The body is covered by a coat of hairs (made of keratin). Cutaneous glands such as sweat glands and oil glands.

5. They have two pairs of pentadactyl limbs.

7. Respiration is by one pair of lungs.

8. A horizontal diaphragm present in between thorax and abdomen.

12. Sexes are separate, internal fertilization present, mostly viviparous but a few are oviparous and lay eggs (e.g. Platypus & Echidna), and some like Kangaroos give birth to very poorly developed young ones.