The elements of a force system acting at a section of a member are axial force, shear force and bending moment and the formulae for these force systems were derived based on the assumption that only a single force element is acting at the section. Figure-2.2.1.1 shows a simply supported beam while figure-2.2.1.2 shows the forces and the moment acting at any cross-section X-X of the beam. The force system can be given as: Combined effect of these elements at a section may be obtained by the method of superposition provided that the following limitations are tolerated: (a) Deformation is small (figure-2.2.1.3)

If the deflection is large, another additional moment of Pδ would be developed. (b) Superposition of strains are more fundamental than stress superposition and the principle applies to both elastic and inelastic cases.

Figure-2.2.2.1 shows the combined action of a tensile axial force and bending moment on a beam with a circular cross-section. At any cross-section of the beam, the axial force produces an axial strain εa while the moment M causes a

Superposition of stresses due to axial force and bending moment

In linear elasticity, stresses of same kind may be superposed in homogeneous and isotropic materials. One such example (figure-2.2.3.1) is a simply supported beam with a central vertical load P and an axial compressive load F. At any section a compressive stress of

and a bending stress of

are produced. Here d is the diameter of the circular bar, I the second moment of area and the moment is

where the beam length is 2L. Total stresses at the upper and lower most fibres in any beam cross-section are

respectively. This is illustrated in figure-2.2.3.2

2.2.3.2F- Combined stresses due to axial loading and bending moment.

Superposition of stresses due to axial force, bending moment and torsion

Until now, we have been discussing the methods of compounding stresses of same kind for example, axial and bending stresses both of which are normal stresses. However, in many cases members on machine elements are subjected to both normal and shear stresses, for example, a shaft subjected to torsion, bending and axial force. This is shown in figure-2.2.4.1. A typical example of this type of loading is seen in a ship’s propeller shafts. Figure-2.2.4.2 gives a schematic view of a propulsion system. In such cases normal and shearing stresses need to be compounded. Consider a state of general plane stress in x-y co-ordinate system. We now wish to transform this to another stress system in, say, x′- y′ co-ordinates, which is inclined at an angle θ. This is shown in figure-2.2.5.1. A two dimensional stress field acting on the faces of a cubic element is shown in figure-2.2.5.2. In plane stress assumptions, the non-zero stresses are σx, σy and τxy=τyx.We may now isolate an element ABC such that the plane AC is inclined at an angle θ and the stresses on the inclined face are σ′x and τ′xy . Considering the force equilibrium in x-direction we may write

This may be reduced to

Since plane AC can assume any arbitrary inclination, a stationary value of σx′ is given by

This equation has two roots and let the two values of θ be θ1 and (θ1+90o ). Therefore these two planes are the planes of maximum and minimum normal stresses. Now if we set  τx'y' 0 we get the values of θ corresponding to planes of zero shear stress.

In the same way, condition for maximum shear stress is obtained from

Consider an element with the following stress system (figure-2.2.6.1) σx=-10 MPa, σy = +20 MPa, τ = -20 MPa. We need to find the principal stresses and show their senses on a properly oriented element

Solution: The principal stresses are 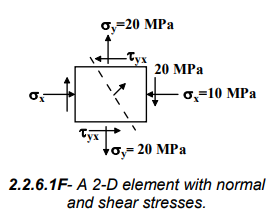 2.2.6.2F- Orientation of the loaded element in the left to show the principal stresses.