We have noted in chapter 1 that the two most common modes of energy exchanged by a thermodynamic system and its surroundings are work and heat. The interconvertibility between these two forms of energy was first demonstrated by the British scientist James P. Joule during 1840s by a series of carefully executed experiments. The experimental setup he used is shown as a schematic in fig. 3.1.  Known quantities of a set of fluids (water, oil, and mercury) were placed in an 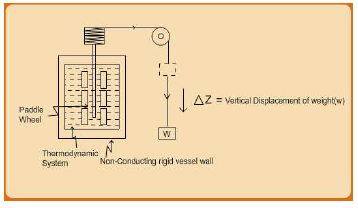 nsulated, rigid vessel and stirred by means of rotating shaft provided with vanes. The amounts of work done on the fluid by the stirrer were measured in terms that needed to lower or raise a weight, and the resultant change in the temperature of the fluid was recorded. The key observation made by Joule was that for each fluid a fixed amount of work was required per unit mass for every degree of temperature rise caused by the rotating paddle wheel. Further, the experiments showed that the temperature of the fluid could be restored to its initial value by the transfer of heat by bringing it in contact with a cooler object. These experimental findings demonstrated for the first time that inter-convertibility exists between work and heat, and therefore the latter was also a form of energy.

Joule’s observation also provided the basis for postulation of the concept of internal energy (introduced briefly in section 1.3). Since work are heat are distinctly different forms of energy how is it possible to convert one into another? The question can be answered if one assumes that although these two types of energies are distinct in transit across a thermodynamic system boundary, they must eventually be stored within a thermodynamic system in a common form. That common form is the so-called internal energy. As we have already discussed in section 1.3, such a form of energy can only repose at the microscopic level of atoms and molecules, essentially in the form of translational, vibrational and rotational energies. To this may be added the potential energy of intermolecular interactions (as introduced in section 2.2).  On a sub-molecular scale energy is associated with the electrons and nuclei of atoms, and with bond energy resulting from the forces holding atoms together as molecules. With these considerations one is in a position to rationalize the observation that while a system may receive energy in the form of work done on it, it may part with it also in the form of heat to another body or surroundings and be restored to its state prior to receipt of work. This is possible as in the interim between these two processes all energy may be stored in the form of internal energy.

As may be evident from the foregoing discussion, the addition of heat or work from an external source can lead to enhancement of the microscopic form of systemic (internal) energy. As also noted in chapter 1 the terminology “internal” is applied mainly to distinguish it from the mechanical potential and kinetic energies that a thermodynamic system may also possess by virtue of its position and velocity with respect to a datum. The latter two may then be thought of as “external” forms of energy.

It is important to note that like other intensive, macroscopic variables such as pressure, temperature, mass or volume, internal energy is a state variable as it is wholly dependent on the energy states that its atoms / molecules. Thus any change in the (say, specific) internal energy due to a process would only depend on the initial and final states, and not on the path followed during the change. Thus as for changes in P, V or T, one may write:

However, unlike P, V, T or mass, U is not a directly measurable property. Besides, in common with potential and kinetic energies, no absolute values of internal energy are possible. However, this is not of particular significance as in thermodynamic processes one is always interested in changes in energies rather than their absolute values