Risk and Returns: Concept of Risk and ReturnsAfter investing money in a project a firm wants to get some outcomes from the project. The outcomes or the benefits that the investment generates are called returns. Wealth maximization approach is based on the concept of future value of expected cash flows from a prospective project.So cash flows are nothing but the earnings generated by the project that we refer to as returns. Since fixture is uncertain, so returns are associated with some degree of uncertainty. In other words there will be some variability in generating cash flows, which we call as risk. In this article we discuss the concepts of risk and returns as well as the relationship between them.

i. Elements of Risk:Various components cause the variability in expected returns, which are known as elements of risk. There are broadly two groups of elements classified as systematic risk and unsystematic risk.

Systematic Risk:Business organizations are part of society that is dynamic. Various changes occur in a society like economic, political and social systems that have influence on the performance of companies and thereby on their expected returns. These changes affect all organizations to varying degrees. Hence the impact of these changes is system-wide and the portion of total variability in returns caused by such across the board factors is referred to as systematic risk. These risks are further subdivided into interest rate risk, market risk, and purchasing power risk.

Unsystematic Risk:The returns of a company may vary due to certain factors that affect only that company. Examples of such factors are raw material scarcity, labour strike, management ineffi­ciency, etc. When the variability in returns occurs due to such firm-specific factors it is known as unsystematic risk. This risk is unique or peculiar to a specific organization and affects it in addition to the systematic risk. These risks are subdivided into business risk and financial risk.

Two approaches are followed in measurement of risk:(i) Mean-variance approach, and(ii) Correlation or regression approach.Mean-variance approach is used to measure the total risk, i.e. sum of systematic and unsystematic risks. Under this approach the variance and standard deviation measure the extent of variability of possible returns from the expected return and is calculated as:

Where, Xi = Possible return,P = Probability of return, andn = Number of possible returns.Correlation or regression method is used to measure the systematic risk. Systematic risk is expressed by β and is calculated by the following formula:

The form of the regression equation is as follows:It is used in the following form

Concept of Return:Return can be defined as the actual income from a project as well as appreciation in the value of capital. Thus there are two components in return—the basic component or the periodic cash flows from the investment, either in the form of interest or dividends; and the change in the price of the asset, com­monly called as the capital gain or loss.The term yield is often used in connection to return, which refers to the income component in relation to some price for the asset. The total return of an asset for the holding period relates to all the cash flows received by an investor during any designated time period to the amount of money invested in the asset.

It is measured as:Total Return = Cash payments received + Price change in assets over the period /Purchase price of the asset. In connection with return we use two terms—realized return and expected or predicted return. Realized return is the return that was earned by the firm, so it is historic. Expected or predicted return is the return the firm anticipates to earn from an asset over some future period.

Risk and Return Problems and Solutions

Problem 1:On the basis of expected Rate, Standard Deviation, Variance and Coefficient of variation decided which of the following company is best for investment (Single company Risk analysis).

On the basis of above mention risk indicators Company H is best.

Problem 2:Following are the probability distribution of returns of portfolio of Stock A and Stock B in equal proportion of weight in each state of economy.  You are required to calculate Expected Return and Risk for individual Stocks? 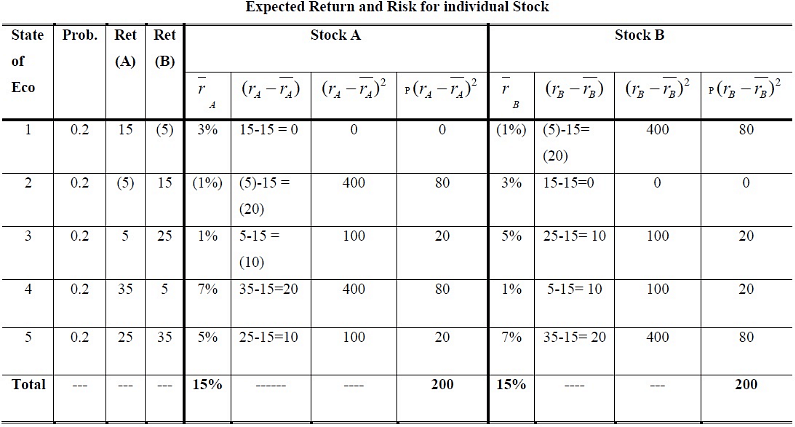 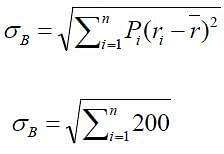 Problem 3:If you deposit Rs. 1,000 in the bank at a nominal interest rate of 6 percent, you will have Rs. 1,060 at the end of the year. Suppose that the inflation rate during the year is also 6 percent. Find real amount in Rupees?Solution: 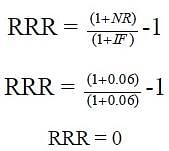 Problem 4:You save Rs. 100 and invest it at a nominal interest rate of 8%. Given the expected inflation is 5% per year, what is the real rate of return?Solution: 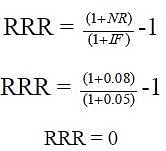 Problem 5:Suppose the current market value of Rs. 100 and no dividend income after one year. Find expected Rate of Return?