Six Sigma is a disciplined, statistical-based, data-driven approach and continuous improvement methodology for eliminating defects in a product, process or service. It was developed by Motorola in early to middle 1980’s based on quality management fundamentals, then became a popular management approach at General Electric (GE) in the early 1990’s. Hundreds of companies around the world have adopted Six Sigma as a way of doing business.

Six Sigma can also be thought of as a measure of process performance, with Six Sigma being the goal, based on the defects per million. Once the current performance of the process is measured, the goal is to continually improve the sigma level striving towards 6 sigma. Even if the improvements do not reach 6 sigma, the improvements made from 3 sigma to 4 sigma to 5 sigma will still reduce costs and increase customer satisfaction. 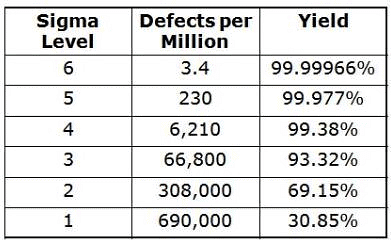