The document Conductance - Electrochemistry Chemistry Notes | EduRev is a part of the Course Physical Chemistry.

K is conductance of solution

Cm is concentration of solution in terms of molarity.

Relationship Between Molar and Equivalent Conductivities

Where n = n factor of electrolyte = total charge carried by either of the positive or negative ion.

Variation of Conductance with Dilution

0) and molar conductance at infinite dilution

, respectively. The increase of

m with dilution of a weak electrolyte is attributable to increase of degree of dissociation with dilution resulting into more number of ions in solution. Note that ions are carriers of electricity. The increase of

m of a strong electrolyte which remains completely ionised at all dilutions, is attributed to increase in the ionic mobilities of ions due decrease in inter-ionic attraction. As dilution approaches unity, the member of ions becomes maximum and hence

m is attained due to the maximum ionic mobilities of the ions since at infinite dilution the dissociation of strong electrolyte is complete and inter-ionic attraction cases to exist completely.The decrease in K may also be explained in the following way. Upon dilution the number of ions, in the case of weak electrolyte, increase but volume of solution also increases. The increase of volume is in greater proportion than the increase of number of ions resulting into decrease in number of ions per c.c. solution. The specific conductivity being the conductivity of 1 c.c. solution, should obviously decrease.The variation of molar conductance of a strong electrolyte with concentration is theoretically give by

Where A and B are the Debye-Hückel constants depending upon nature of the solvent and temperature and C is the molar concentration of solution. 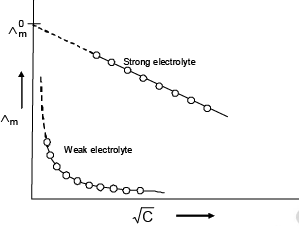 Arrhenius Theory of Electrolytic Dissociation for weak Electrolytes: According to the Arrhenius theory of electrolytic dissociation, there exists an equilibrium between the undissociated molecule AB and the ions A+ and B– which result from the dissociation of the molecule.Thus,

If a is the degree of dissociation and c is the initial concentration of the weak electrolyte AB, then concentrations of various species are :

is known as the Ostwald dilution law, according to which the degree of dissociation increases as c decreases.  As a is increased, the concentration of the ion A+ and B- are also increased.  Thus, the increase of conductance for a weak electrolyte is primarily due to the increase in the number of ions on dilution.

Debye-Huckel-Onsager Theory Ionic Atmosphere for strong electrolytesThe conductance data of many substances did not conform to Ostwald dilution law. These substance are strong electrolytes which are known to be completely ionized in solution.  The variation of molar conductivity of a dilute solution of a strong electrolyte on dilution is explained in the basis of DebyeHuckel-Onsager theory.  According to this theory, each ion in solution is surrounded by an ionic atmosphere consisting of other ions whose net average charge is opposite to that of the central.  Ion this ionic atmosphere is spherical and symmetrical in nature in the absence of any disturbing factor such as the application of potential across the two electrodes immersed in the solution during the conductance measurements. However, when the potential is applied, the ions start moving towards the respective electrodes and a as a result the ionic atmosphere is distorted which result in a decrease in speed of the ions.  Debye and Huckel showed that these effects are due to two factors, namely,(a) relation of ionic atmosphere due to an applied potential or symmetry effect and(b) the electrophoretic effect. 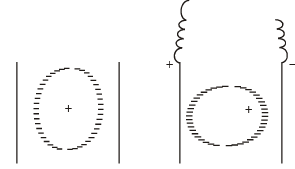 Electrophoretic Effect: Ions in solution are generally solvated and when these move, they carry with them the associated solvent molecules. Since cations and anions move in the opposite directions, it is obvious that any particular ion, say the central ion, does not move through a stationary medium but through a medium in which solvent molecules carried by the ions of the atmosphere move in the opposite direction.  Similarly, the ion involved in the ionic atmosphere move in a medium of opposite moving solvent molecules carried by the central ion.  Thus, both type of ions, while moving in solution do not travel through a stationary medium but through a medium which moves in the opposite direction.  These counter-currents make it more difficult for the ion to move through the solution and thus slow down its motion. This is known as the electrophoretic effect.

is the decrease in molar conductivity due to the asymmetric effect.The second term

is the decrease in molar conductivity due to the electrophoretic effect.

. At such high dilutions, the interionic attractions become negligible and each ion migrates independent of the other ions. These observations were used by Kohlrausch to postulate a famous law called Kohlrauschs law of independent ion migration. The Kohlrauschs law in terms of molar conductivity is stated as follows: "At infinite dilution, the molar conductivity of an electrolyte can be expressed as the sum of contributions from its individual ions.

are the molar conductivities of the cation and anion at infinite dilution respectively..

of a weak electrolyte

In order to calculate

Adding equation (I) and equation (II) and substracting(III) from them

According to Faraday’s first law of electrolysis, the number of ions discharged at an electrode is proportional to the total quantity passed through the solution, hence it follows that

The fraction  of the total current carried by each ion is called transport number.  Thus, if u+ is the mobility of cation and u- that of the anion, then

Transport number of the cation,