2.4 Heat conduction in bodies with heat sourcesThe cases considered so far have been those in which the heat conducting solid is free of internal heat generation. However, the situations where the internal heat is generated are very common cases in chemical industries for example, the exothermic reaction in the solid pallet of a catalyst.

We have learnt that how the Fourier equation is used for the steady-state heat conduction through the composites of three different geometries that were not having any heat source in it. However, the heat generation term would come into the picture for these geometries. It would not be always easier to remember and develop heat conduction relations for different standard and non-standard geometries. Therefore, at this point we should learn how to develop a general relation for the heat conduction that should be applicable to the entire situation such as steady-state, unsteady state, heat source, different geometry, heat conduction in different direction, etc. Again here we will consider that the solid is isotropic in nature, which means the thermal conductivity of the material is same in all the direction of heat flow. 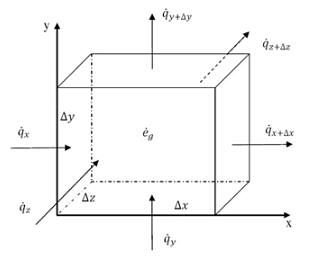 According to Fourier’s law of heat conduction, the heat flowing into the volume element from the left (in the x-direction) can be written as,

The left side of the above equation represent the net heat flow in the x-direction. If we put the value

of  in the right side of the above equation,

In a similar way we can get the net heat flow in the y and z-directions,

As we know some heat is entering, some heat is leaving and some heat in generating in the volume element and as we have not considered any steady state assumption till now, thus because of all these phenomena some of the heat will be absorbed by the element. Thus the rate of change of heat energy

within the volume element can be written as,

where, cp is the specific heat capacity at constant pressure (J/(kg·K)), ρ is the density (kg/m3) of the material, and t is the time (s).We know all the energy term related to the above problem, and with the help of energy conservation,

On putting all the values in the above equation,

As we have considered that the thermal conductivity of the solid is isotropic in nature, the above relation reduces to,

called the Laplacian operator, and in Cartesian coordinate it is defined as

Equation 2.19 is known as general heat conduction relation. When there is no heat generation term the eq.2.19 will become,

and the equation is known as Fourier Field Equation.