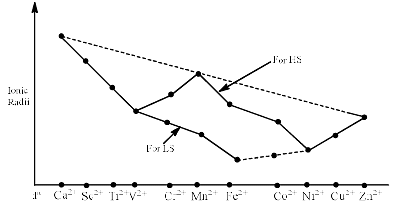 The ionic radii is determined b y how closely a ligand can approach the metal ion. If both the t2g and eg orbitals are symmetrical filled the ionic radii will not be deviated. For example ionic radii of Ca2+, Mn2+ and Zn2+ fall on curve because these ions are screened by a spherical charge distribution. In d1 syst em the electron will be in t2g orbital which does not point towards ligands, therefore, the ionic radii is decreased from d1 to d3 system. When we go to d4 high spin the radii increase because the coming electron would be in eg orbital and hence ligands shall repel farther. This trend will continue and the above curve is obtained. On the basis of above statements we can also explain the trend of ionic radii obtained in the case of tripositive metal ions.

The hydration energy of metal ions should increase linearly from Ca2+ to Zn2+ because the charge density is increase but it is not observed. This is because when the metal cations of 3d -series transition metals get hydrated, a high spin aqua complex is formed. Therefore, energy released is not only hydration energy but also CFSE. Thus:

If the experimental hydration energies for dipositive metal ions of the 3d transition elements are plotted as a function of atomic no., a double humped curved is formed. 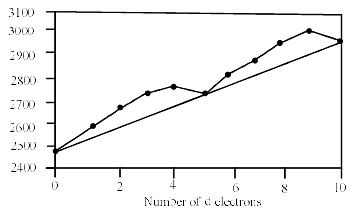 The two humps in such a curve due to contribution of CFSE to the hydration energy.  Since the CFSE of Ca2+, Mn2+, and Zn2+ in high spin Oh complexes is zero. Therefore, the hydration energies of these ions lie on the straight line and does not deviate from the experimental value.

According to Born Landes’s equation:

Where N = Avogadro’s no., A = Madelung Constant which depends upon the geometry of the crystal, Z+ and Z– are the charges on the cat ion and anion respectively, r0 = interionic distance, n = Born exponent.According to Born Lande’s equation, the lattice energy of an ionic crystal increases with increase in product of Z+ and Z– and decreases with interionic distance (r0). Consequently, the lattice energy for halides of the dipositive metal ions of the 3d -elements should increase from Ca2+ to Zn2+. But a humped curve is obtained. This is because of contribution of CFSE to the lattice energy. 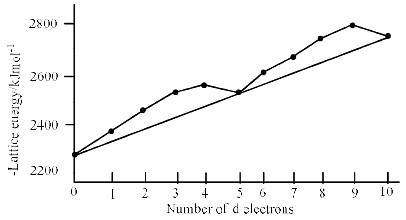 No. of octahedral voids = No. of lattice points.

Spinels are of two types:

(a) Normal Spinels (b) Inverse Spinels

a. Normal Spinels : In normal spinels A2+ ions occup y one eight of the tetrahedral voids and B3+ ions occupy half of the octahedral voids. This is written as [AII][BIII]O4.For example – MgAl2O4, MgCr2O4, NiCr2O4, Mn3O4, Co3O4 etc.

[B][AB]O4. Examples are CrFe2O4, Fe3O4, NiFe2O4, MgFe2O4, NiAl2O4 etc. In general, the spinels having Fe3+ ions are inverse spinels.Predicting Structures of Spinels: Structures of spinels are determined by the CFSE of the cations occupying the tetrahedral and octahedral voids.The metal cations in Td and Oh voids are surrounded b y four and six oxide ion respectively. Thus, metal ions are considered to form Td and Oh complexes respectively. The oxide ion because as weak ligand. Structure is determined by followed way: 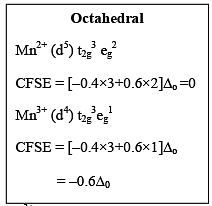 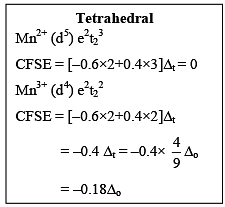 Since, Mn3+ in Oh filed has the highest CFSE, therefore it will be stabilized in Oh voids. Consequently, Mn3+ will occupy the Oh voids and the Mn2+ ion will occupy the tetrahedral voids. Hence Mn3O4 is a normal spinel.

Caution: Calculate all the CFSE in terms of ∆0 for comparing. The ∆t can be converted into ∆0 by multiplying

. For comparing only see the magnitude and not the sign. 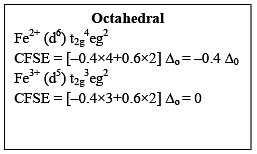 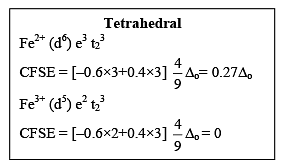 Since CFSE for Fe2+ in octahedral field is highest . Therefore, Fe2+ ions will occup y Oh voids and Fe3+ ions will occupy both Td and Oh voids. Thus Fe3O4 in an inverse spinel. 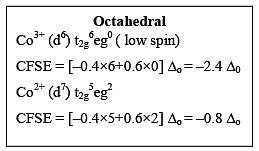 Since CFSE for Co3+ is highest in Oh field, Co3+ ions will occupy octahedral and Co2+ ions will occupy tetrahedral voids. Hence Co3O4 is a normal spinel.Shortcut → Calculate CFSE for both A2+ and B3+ ions in Oh filed. If CFSE of B3+ is higher than A2+ ions, the spinel will be normal spinel. If CFSE of A2+ is higher than that of B3+, then the spinel will be inverse spinel.