Coulomb Gauge and the Potential formulation of Maxwell’s equations

The Maxwell’s equations in their final form are

We had a lot of discussion on Coulomb gauge in which the divergence of the vector potential is zero. Is this gauge any good to be used now?

Recall the pair of equations,

Note that first equation gets decoupled in Coulomb gauge and becomes a Poisson’s equation for the scalar potential with the formal solution,

The second equation is not straightforward and requires a lot of mathematical mannipulation before the decoupling can be seen.

We insert the formal solution of the scalar potential into this equation,

is a current and we replace it by

using the equation of continuity and the term becomes

We will do some further simplification to (I). But first let us recall that we have learnt that a vector is completely determined when its divergence and curl are specified. This allows us to write the current density vector inside the integral as a sum of one part

whose divergence is zero and another part

whose curl is zero,

Let us get back to the relation (I). Note that the gradient outside is taken with respect to the point of observation. We can take it inside the integration and it will act only on

However, since this depends only on the difference of

'by incorporating a minus sign. With this (I) becomes

We will simplify this further by using chain rule differentiation,

Substituting this into the preceding term, we have two integrals, one of which is a volume integral of a gradient. This term can be converted to a surface integral like the way we do for the divergence theorem and take to surface to infinity to make this term zero. This implies the remaining integral is over all space and we get

in obtaining this step, we have used

and used the fact that

can be written as

because the transverse part has zero divergence. Further, we can use the fact that

is irrotational to write,

With this (I) takes the form

At this stage, we will use the Green’s identity for fields T and U according to which

As our fields vanish at infinity, we have,

Using this, we get,

Thus the original equation for the vector potential has now been completely decoupled from the scalar part and we have , instead, an inhomogeneous wave equation,

We have seen that the electromagnetic field carries energy. A natural question arises as to whether it carries momentum as well. The answer is affirmative and we will illustrate this by a simple procedure. A more rigorous derivation requires use of the theory of relativity. Suppose, we have two charged particles, q1 and q2, the former moving along the x axis while the latter moves along the y axis. 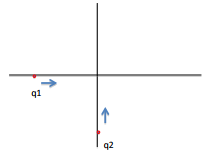 The force on q1 just as it passes by the origin is purely electrical as it lies along the direction of motion of q2, and is given by

where d is the distance between the charges at that instant. This is also the magnitude of the electric force on q2 due to q1. However, if we look at the force on q2 due to q1, there is also a magnetic force. This is because the moving charge q1 creates a magnetic field in the z direction which exerts a force on q2. This is certainly anomalous and is in apparent violation of the third law. We say it is an apparent violation because the third law is essentially a statement of conservation of momentum and it is the total momentum of the system that needs to be conserved. In this case, in addition to the two charges, there exists the electromagnetic field and if the field itself carries momentum, there is no violation. This is intuitive but the fact that electromagnetic field carries momentum is a fact.

Let us look at the force exerted on a system of sources (charges and currents) and electromagnetic field. Let

represent the moment associated with the sources. The force exerted on the system of sources is then given by Lorentz force equation

Once again, for simplicity, we will consider linear electric and linear magnetic material. We will use Maxwell’s equations to cast these equations in in terms of field variables. We replace ρ sing Gauss’s law and the current density from Ampere’s law,

Substituting these in the force equation, we get,

In the last expression we have used Faraday’s law. Thus we have,

In the second term we have changed the order of cross product and hence a minus sign.

The last term on the right can be seen to be

is the Poynting vector. Since the expression has the dimension of force,

The expression on the right looks asymmetric in the electric and magnetic quantities which can be rectified easily. Let us look at the electric field terms represented by the first and the third terms on the right.

other than for a factor of ∈0 In order to simplify this to desired form, we will calculate the Cartesian components of this. Let us find what its x component is and then we will add up the three components.

From symmetry, one can write the y and z components

Let us add the three components. The second term of each of the expressions add to give us

The remaining terms look messy and we will return to them shortly.

to the triple vector product term. This is simply adding zero because

However, this will make the electric and the magnetic fields at par and we would get a contribution of

similar to the case of the electric field. This would give us a term

We will return to a discussion of the remaining terms in the next lecture.