In the last lecture, we had written down the expression for the rate of change of momentum of the sources and fields as given by,

Adding the second term of each of the components, we wrote it as

and a similar contribution from the magnetic field gives us

Inserting the associated constants ∈0 and

we get this contribution as the gradient of energy density

which is the momentum density term.

Since the left hand side is a force, we would have liked to express it as a gradient of a scalar which would act like a potential. However, looking at the terms does not seem to suggest such a possibility because the components seem to have been mixed.

We , therefore, bring back the terms which we have been able to express as a gradient of the energy density and see whether there can be alternative ways of expressing them.

We note here that in expressing it as a gradient of a scalar, we started with a single function and obtained three quantities, the components of a vector. we are aware that if we start with a vector and take a divergence, we would get a scalar. Thus in some sense, the gradient increases the space but a divergence decreases the same. We generalize the definition of a vector to a “Tensor” of arbitrary rank n as a collection of 3n quantities. Thus a scalar is a tensor of rank zero, a vector a tensor of rank 1. In this case, we take a tensor of rank 2, denoted by nine components

A divergence of a tensor of rank 2 will reduce its rank by 1, giving us a vector which has 3 components.

We will first state the result and then show that this can be actually done. We claim that the right hand side of our force equation can be expressed as a divergence of a tensor of rank 2 denoted by

whose components are given by

To fix our ideas, let us once again, take B=0. We can express

Since the divergence of the tensor is a vector, it has three components and we define the components as follows

Substituting the components given in the matrix above, we find,

which is precisely the x component of the electric field term that we had found. Similar statement can be proved for the y and z components and also for the magnetic field terms. Thus we have,

where, we have written da for the area element instead of dA so as not to confuse with the Poynting vector which we have denoted by

The last relation is obtained by a procedure similar to the divergence theorem.

is the momentum flux nornmal to the bounding surface of the volume. Since the relation is true for arbitrary volume, the relation can be stated in a differential form in terms of the momentum densities, indicated by

This is a statement of the conservation of linear momentum for the electromagnetic field which sates that the rate of change of momentum of a closed system containing sources and fields can occur only through a transport of momentum through the bounding surface.

Force on one of the plates of a parallel plate capacitor

Let the plates be in the yz plane so that the electric field is directed along the x-direction. we have,

is directed along – x direction. We have,

Though solving this problem can be done by more straightforward method, we are doing it by the method of Stress Tensor as an illustration. 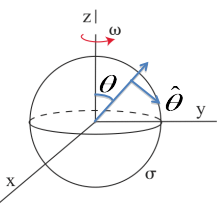 direction. The surface current density is given by, in spherical polar,

where r=R  on the surface of the sphere. Consider a thin circular strip lying between angles θ and  θ + d θ.The radius of the circle is R sin θ.The width of the strip (which is crossed by the linear current density) is Rd θ so that the current flowing in the strip is

The circulating loop is equivalent to a magnetic moment (πR2 sin2θ)dl in the z- direction. Since all such loops are parallel, the net magnetic moment of the spinning shell is

The magnetic field due to the shell is given by

Since the fields are constant, so is the Poynting vector. Thus the force is given by

By symmetry, the force is in z direction. Thus we will need to calculate only the z component of the normal component of the stress tensor. In this case, we consider only the magnetic forces (the electric force is also there as the shell has charges, but we restrict ourselves to magnetic case only. Since we are interested only in the z components, the only components of the stress tensor that we requires are

In terms of these, we can write down the force as

As we are interested in calculating force on the northern hemisphere, there are two surfaces to take into account. The equatorial plane inside the sphere for which the normal direction is along the negative z direction. Since we need to consider only the inside field, the field to be considered here is constant.

The field is given by

Thus only term in stress tensor is

and as the field is constant, the force is

That leaves us with the outside hemisphere. The normal to the surface is along the radial direction. We need to compute the integral

Let us compute each term of the integrand using the expression for the field outside the shell, which is given by

the limits of integration are from 0 to π/2 as it is a hemisphere.

The second integral is

and is given by, using

Adding the two contributions, the force on the outer surface is

Substituting the value of the magnetic moment,

If we add both the inside and the outside contributions, the magnetic force on the northern hemisphere is

the negative sign shows that the force is directed towards the southern hemisphere and is attractive in nature.