Have you ever wondered how an automatic mechanical watch works? At the center of its complicated motion lies one of the most basic principles of classical physics: The law of conservation of mechanical energy. Let’s delve into the principle:

It is the capacity of an object to do work by the virtue of its motion or configuration (position). Mechanical Energy is the sum of following two energy terms:

Here, V is the potential energy of the object in joules (J), m is the mass of the object in kilograms, g is the gravitational constant of the earth (9.8 m/s2), and h is the height of the object from earth’s surface. Now, we know that the acceleration of an object under the influence of earth’s gravitational force will vary according to its distance from the earth’s centre of gravity.But, the surface heights are so minuscule when compared to the earth’s radius, that, for all practical purposes, g is taken to be a constant.

Consider a body of mass m being raised to a height h vertically upwards as shown in above figure. The work done is mgh. Suppose we take the body along the path as in (b). The work done during horizontal motion is zero. Adding up the works done in the two vertical parts of the paths, we get the result mgh once again. Any arbitrary path like the one shown in (c) can be broken into elementary horizontal and vertical portions. Work done along the horizontal path is zero. The work done along the vertical parts add up to mgh. Thus we conclude that the work done in raising a body against gravity is independent of the path taken. It only depends upon the initial and final positions of the body. We conclude from this discussion that the force of gravity is a conservative force.

(i) Gravitational force, not only due to Earth due in its general form as given by the universal law of gravitation, is a conservative force.

(ii) Elastic force in a stretched or compressed spring is a conservative force.

A force is said to be non-conservative if work done by or against the force in moving a body depends upon the path between the initial and final positions.

The frictional forces are non-conservative forces. This is because the work done against friction depends on the length of the path along which a body is moved. It does not depend only on the initial and final positions. Note that the work done by frictional force in a round trip is not zero.

Proof of Conservation of Mechanical energy

Let us consider the following illustration: 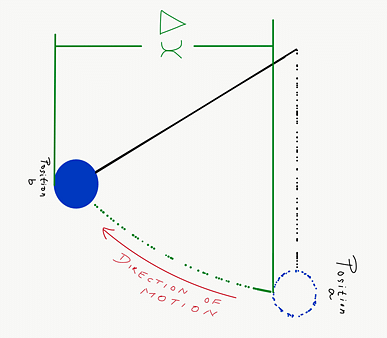 Here, Δx is the displacement of the object under the conservative force F. By applying the work-energy theorem, we have: ΔK = F(x) Δx. Since the force is conservative, the change in potential Energy can be defined as ΔV = – F(x) Δx. Hence,

The pendulum is a very good example of conservation of mechanical energy.  Following illustration will help us understand the pendulum motion: 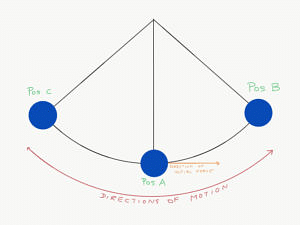 This property of mechanical energy has been harnessed by watchmakers for centuries. Of course, in the real world, one has to account the other forces like friction and electromagnetic fields. Hence, no mechanical watch can run perpetually. But, if you get a precise mechanical watch like Rolex, you can expect long power reserves!

Q: A mass of 2kg is suspended by a light string of length 10m. It is imparted a horizontal velocity of 50m/s. Calculate the speed of the said mass at point B. 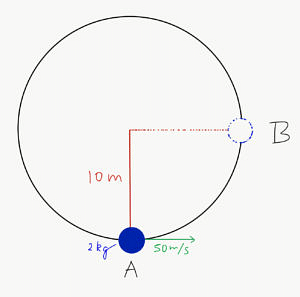 Ist format : (When constant force is given)

Ex.9 An object is displaced from position vector

Find the work done by this force.

Suppose that a man sets himself in motion backward by pushing against a wall. The forces acting on the man are his weight 'W' the upward force N exerted by the ground and the horizontal force N exerted by the wall. The works of 'W' and of N are zero because they are perpendicular to the motion. The force N' is the unbalanced horizontal force that imparts to the system a horizontal acceleration. The work of N', however, is zero because there is no motion of its point of application. We are therefore confronted with a curious situation in which a force is responsible for acceleration, but its work, being zero, is not equal to the increase in kinetic energy of the system.

The new feature in this situation is that the man is a composite system with several parts that can move in relation to each other and thus can do work on each other, even in the absence of any interaction with externally applied forces. Such work is called internal work. Although internal forces play no role in acceleration of the composite system, their points of application can move so that work is done; thus the man's kinetic energy can change even though the external forces do no work.

Draw the force at proper point where it acts that give proper importance of the point of application of force.

In equation (1) we can calculate work done only when we know the path taken by the particle.

Law of Conservation of Energy

Energy can be classified into two distinct categories : one based on motion, namely kinetic energy; the other onconfiguration (position), namely potential energy. Energy comes in many a forms which transform into one another in ways which may not often be clear to us.

The law of conservation of energy states that the total energy is constant in any process. Energy may change in form or be transferred from one system to another, but the total remains the same.

We can define energy as the capacity to do work. There are various forms of energy. The law of conservation of energy states that energy can neither be created nor be destroyed. It can only be transferred from one form to another. Some forms of energy are defined and discussed in this article.

Plants use solar energy, carbon dioxide, and water to synthesize food. This food is consumed by humans and animals, is broken down in their bodies, and they get energy for life activities. They are all examples of chemical energy.Chemical energy is the energy that is stored in the bonds of chemical compounds. Moreover, a chemically stable compound has less energy stored in it as compared to its separate parts. When a chemical reaction takes place, there is a change in the arrangement of atoms which results in either absorption (endothermic) or a release (exothermic) of energy.

You might be aware of the infamous bombings of the cities of Hiroshima and Nagasaki during World War II which caused the destruction to the extent that its consequences can be seen even today. Those were the nuclear bombs which are considered as one of the most dangerous inventions of mankind till date. Nuclear energy is the energy in the nucleus of an atom. The energy is released during nuclear fusion or fission reactions. And the energy released is really vast. When the reaction is controlled, it can be used to generate electricity. Under uncontrolled nuclear fission reactions, nuclear weapons are created.

The Equivalence of Mass and Energy

An equation given by Einstein explains the relationship equivalence of mass and energy. According to it, the energy of a body is equal to the products of the mass of the body and the square of the speed of light. The famous equation is

Where E is the energy, m is the mass of the body and c is the speed of light in a vacuum which is approximately equal to 3 x 108 m/sec.

The document Conservation of Mechanical Energy & Various Forms of Energy Notes | Study Physics For JEE - JEE is a part of the JEE Course Physics For JEE.
All you need of JEE at this link: JEE
Join Course