A conservative force is dependent only on the position of the object. If a force is conservative, it is possible to assign a numerical value for the potential at any point. When an object moves from one location to another, the force changes the potential energy of the object by an amount that does not depend on the path taken. If the force is not conservative, then defining a scalar potential is not possible, because taking different paths would lead to conflicting potential differences between the start and end points.

Informally, a conservative force can be thought of as a force that conserves mechanical energy. Suppose a particle starts at point A, and there is a force F acting on it. Then the particle is moved around by other forces, and eventually ends up at A again. Though the particle may still be moving, at that instant when it passes point A again, it has traveled a closed path. If the net work done by F at this point is 0, then F passes the closed path test. Any force that passes the closed path test for all possible closed paths is classified as a conservative force.

For non-conservative forces, the mechanical energy that is lost (not conserved) has to go somewhere else, by conservation of energy. Usually the energy is turned into heat, for example the heat generated by friction. In addition to heat, friction also often produces some sound energy. The water drag on a moving boat converts the boat's mechanical energy into not only heat and sound energy, but also wave energy at the edges of its wake. These and other energy losses are irreversible because of the second law of thermodynamics.

A direct consequence of the closed path test is that the work done by a conservative force on a particle moving between any two points does not depend on the path taken by the particle.

This is illustrated in the figure to the right: The work done by the gravitational force on an object depends only on its change in height because the gravitational force is conservative. The work done by a conservative force is equal to the negative of change in potential energy during that process. For a proof, imagine two paths 1 and 2, both going from point A to point B. The variation of energy for the particle, taking path 1 from A to B and then path 2 backwards from B to A, is 0; thus, the work is the same in path 1 and 2, i.e., the work is independent of the path followed, as long as it goes from A to B.

For example, if a child slides up a frictionless slide, the work done by the gravitational force on the child from the down of the slide to the up will be the same no matter what the shape of the slide; it can be straight or it can be a spiral or conical. The amount of work done only depends on the vertical displacement of the child 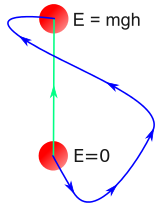 A force field F, defined everywhere in space (or within a simply-connected volume of space), is called a conservative force or conservative vector field if it meets any of these three equivalent conditions: