Contacts are actually a bit more complex than our glib discussion of your interaction with a slippery floor might suggest.

The nature of the forces acting at a contact depends on three things:

A detailed discussion of friction forces will be left until later. For now, we will consider only two limiting cases (a) fully lubricated (frictionless) contacts; and (b) ideally rough (infinite friction) contacts.

Rolling resistance will not be considered at all in this course. 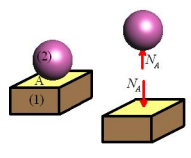 (1) Each solid is subjected to a force at the contact point;(2) The forces between the two solids are repulsive; this requires NA > 0 and NB > 0 for both examples illustrated in the picture;(3) The direction of the forces are along the line connecting the centers of curvature of the two contacting surfaces;(4) The moments acting on each solid at the contact point are negligible.

Three rules that help to establish the direction of frictionless contact forces are: 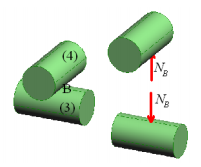 A rough nonconformal contact behaves somewhat like a pinned joint. There can be no relative motion of the contacting surfaces, therefore there must be three components of reaction force acting on both contacting solids. Unlike a pin joint, however, the contact can only sustain a repulsive normal force. This means that the components of force shown in the picture must satisf NA > 0. If the normal force is zero (eg when the two surfaces are about to separate), the tangential forces TA1 = TA2 = 0 as well. 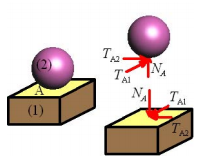 Usually the forces acting at a rough contact are represented by components acting perpendicular and parallel to the contacting surfaces, as shown in the picture above. If you do this, it’s easy to enforce the NA > 0 constraint. But if it’s more convenient, you can treat the contact just like a pin joint, and express the reaction forces in any arbitrary basis, as shown in the picture below.

Two conformal solids are actually subjected to a pressure over the area where they are in contact. It’s really hard to calculate the pressure distribution (you have to model the deformation of the two contacting solids), so instead we replace the pressure by a statically equivalent force. 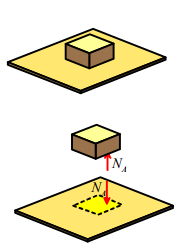 If the two contacting surfaces are flat, then

(1) The reaction force can be modeled as a single force, with no moment(2) The force can act anywhere within the area of contact (its actual position is determined by force and moment balance)(3) The force must be perpendicular to the two surfaces(4) The force acts to repel the two solids.

You can of course make really weird conformal contacts – like a jigsaw connection – that can completely prevent both relative translation and rotation of the contacting solids. In this case the contact behaves just like a clamped joint.

No relative motion can occur at the contact. There must therefore be three components of force acting on each solid.

The component of force acting normal to the surface must be repulsive. 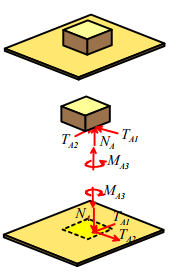 The safest procedure in solving any statics or dynamics problem is to set up and solve equations of motion for every different part of the structure or machine. There are two particularly common structural or machine elements that can be treated using short-cuts. These are (i) Two force members in a structure; and (ii) A freely rotating wheel in a machine.

A Two-force member is a component or structural member that

1. is connected only to two ball-and socket type joints (in 3D) or pin joints (in 2D).2. has negligible weight

We’ve seen an example already in one of the Mickey Mouse examples – it’s shown again in the picture to remind you. Member BC is a two-force member, because its weight is negligible, and it has only two pin joints connecting it to other members. Member AB is not a two-force member – partly because it’s weight is not negligible, but also because Mickey exerts a force on the member. 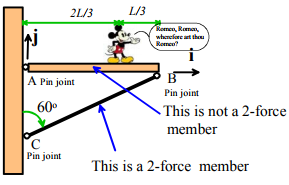 The following rules are very helpful

It’s trivial to show this – if forces act on a body at only two points, and the body is in static equilibrium, then the forces have to be equal and opposite, and must also act along the same line, to ensure that both forces and moments are balanced.

A generic 2 force member is shown in the figure. Note that a 2-force member doesn’t have to be straight, though it often is. 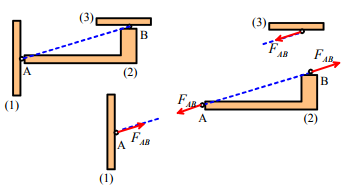 By convention, a positive reaction force is normally taken to pull at each end of the member, as shown. Equal and opposite reaction forces must act on whatever is connected to the two force member.

Forces on a freely rotating wheel with negligible weight: Wheels are so ubiquitous that it’s worth developing a short-cut to deal with them. The picture shows a generic 2D wheel, mounted onto an axle with a frictionless bearing. The contact between wheel and ground is assumed to be ideally rough (infinite friction).

The following trick is helpful

For a freely rotating 2D wheel, there is only one component of reaction force at the contact between the ground and the wheel.

The picture shows a free body diagram for a 2D wheel mounted on a frictionless bearing.

Since only two forces act on the wheel (the force at the axle, and the contact force), it behaves just like a 2 force member. The two forces must be equal and opposite, and must act along the same line. Moreover, the contact force must satisfy RAy > 0. 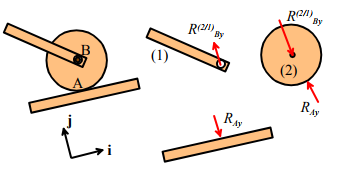 The picture below shows all the forces and moments acting on a freely rotating 3D wheel. The reactions that act on the axle are also shown. The forces and moments shown are the only nonzero components of reaction force.

Finally, a word of caution.

You can only use these shortcuts if: 1. The wheel’s weight in negligible; 2. The wheel rotates freely (no bearing friction, and nothing driving the wheel); 3. There is only one contact point on the wheel.

If any of these conditions are violated you must solve the problem by applying all the proper reaction forces at contacts and bearings, and drawing a separate free body diagram for the wheel.