Frequency distribution tables can be used for both categorical and numeric variables. Continuous variables should only be used with class intervals, which will be explained shortly

A survey was taken on Maple Avenue. In each of 20 homes, people were asked how many cars were registered to their households. The results were recorded as follows:

Use the following steps to present this data in a frequency distribution table.

Your frequency distribution table for this exercise should look like this: Use the following steps to present these data in a cumulative frequency distribution table.

To illustrate, suppose we set out age ranges for a study of young people, while allowing for the possibility that some older people may also fall into the scope of our study.

The frequency of a class interval is the number of observations that occur in a particular predefined interval. So, for example, if 20 people aged 5 to 9 appear in our study's data, the frequency for the 5–9 interval is 20.

Rules for data sets that contain a large number of observations

In summary, follow these basic rules when constructing a frequency distribution table for a data set that contains a large number of observations:

In deciding on the width of the class intervals, you will have to find a compromise between having intervals short enough so that not all of the observations fall in the same interval, but long enough so that you do not end up with only one observation per interval.

It is also important to make sure that the class intervals are mutually exclusive.

Thirty AA batteries were tested to determine how long they would last. The results, to the nearest minute, were recorded as follows:

Use the steps in Example 1 and the above rules to help you construct a frequency distribution table.

Using the given data and a class interval of 10, the interval for the first class is 360 to 369 and includes 363 (the lowest value). Remember, there should always be enough class intervals so that the highest value is included.

The completed frequency distribution table should look like this: 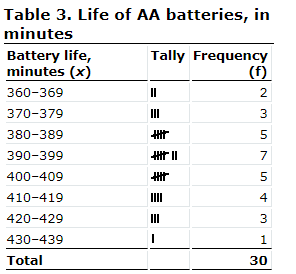 An analyst studying these data might want to know not only how long batteries last, but also what proportion of the batteries falls into each class interval of battery life.

This relative frequency of a particular observation or class interval is found by dividing the frequency (f) by the number of observations (n): that is, (f ÷ n). Thus:

The percentage frequency is found by multiplying each relative frequency value by 100. Thus:

Use the data from Example 3 to make a table giving the relative frequency and percentage frequency of each interval of battery life.

An analyst of these data could now say that:

Keep in mind that these analytical statements have assumed that a representative sample was drawn. In the real world, an analyst would also refer to an estimate of variability (see section titled Measures of spread) to complete the analysis. For our purpose, however, it is enough to know that frequency distribution tables can provide important information about the population from which a sample was drawn.