LEARNING OUTCOMES At the end of this Unit, you should be able to:

NATURE OF HUMAN WANTS All desires, tastes and motives of human beings are called wants in Economics. Wants may arise due to elementary and psychological causes. Since the resources are limited, we have to choose between the urgent wants and the not so urgent wants. All wants of human beings exhibit some characteristic features.1. Wants are unlimited in number. They are never com pletely satisfied.2. Wants differ in intensity. Some are urgent ,others are felt less intensely.3. Each want is satiable.4. Wants are competitive. They compete each other for satisfaction because resources are scarce to satisfy all wants.5. Wants are complementary. Some wants can be satisfied only by using more than one good or group of goods.6. Wants are alternative.7. Wants are subjective and relative.8. Wants vary with time, place, and person.9. Some wants recur again whereas others do not occur again and again.10. Wants may become habits and customs.11. Wants are affected by income, taste, fashion, advertisements and social customs.12. Wants arise from multiple causes such as natural instincts, social obligation and individual’s economic and social status

Classification of wants In Economics, wants are classified into three categories, viz., necessaries, comforts and luxuries.NecessariesNecessaries are those which are essential for living. Necessaries are further sub-divided into necessaries for life or existence, necessaries for efficiency and conventional necessaries. Necessaries for life are things necessary to meet the minimum physiological needs for the maintenance of life such as minimum amount of food, clothing and shelter. Man requires something more than the necessities of life to maintain longevity, energy and efficiency of work, such as nourishing food, adequate clothing, clean water, comfortable dwelling, education, recreation etc. These are necessaries for efficiency. Conventional necessaries arise either due to pressure of habit or due to compelling social customs and conventions. They are not necessary either for existence or for efficiency.Comforts While necessaries make life possible comforts make life comfortable and satisfying. Comforts are less urgent than necessaries. Tasty and wholesome food, good house, clothes that suit different occasions, audio-visual and labour saving equipments etc .make life more comfortable.Luxuries Luxuries are those wants which are superfluous and expensive. They are not essential for living. Items such as expensive clothing, exclusive motor cars, classy furniture, goods used for vanity etc fall under this category.The above categorization is not rigid as a thing which is a comfort or luxury for one person or at one point of time may become a necessity for another person or at another point of time. As all of us are aware, the things which were considered luxuries in the past have become comforts and neces saries today.What is Utility? The concept of utility is used in neo classical Economics to explain the operation of the law of demand. Utility is the want satisfying power of a commodity. It is the expected satisfaction to a consumer when he is willing to spend money on a stock of commodity which has the capacity to satisfy his want. Utility is the anticipated satisfaction by the consumer, and satisfaction is the actual satisfaction derived.A commodity has utility for a consumer even when it is not consumed .It is a subjective entity and varies from person to person. A commodity has different utility for the same person at different places or at different points of time. It should be noted that utility is not the same thing as usefulness. From the economic standpoint, even harmful things like liquor, may be said to have utility because people want them. Thus, in Economics, the concept of utility is ethically neutral.Utility hypothesis forms the basis of the theory of consumer behaviour. From time to time, different theories have been advanced to explain consumer behaviour and thus to explain his demand for the product. Two important theories are(i) Marginal Utility Analysis propounded by Marshall, and(ii) Indifference Curve Analysis propounded by Hicks and Allen.

Assumptions of Marginal Utility Analysis(1) Rationality: A consumer is rational andattempts to attain maximum satisfaction from his limited money income(2) Cardinal Measurability of Utility: According to neoclassical economists, utility is a cardinal concept i.e., utility is a measurable and quantifiable entity. It implies that utility can be measured in cardinal numbers and assigned a cardinal number like 1, 2, 3 etc. Marshall and some other economists used a psychological unit of measurement of utility called utils. Thus, a person can say that he derives utility equal to 10 utils from the consumption of 1 unit of commodity A and 5 from the consumption of 1 unit of commodity B. Since a consumer can quantitatively express his utility, he can easily compare different commodities and express which commodity gives him greater utility and by how much. Utilities from different units of the commodity can be added as well.According to this theory, money is the measuring rod of utility. The amount of money which a person is prepared to pay for a unit of a good, rather than go without it, is a measure of the utility which he derives from the good.(3) Constancy of the Marginal Utility of Money: The marginal utility of money remains constant throughout when the individual is spending money on a good. This assumption, although not realistic, has been made in order to facilitate the measurement of utility of commodities in terms of money. If the marginal utility of money changes as income changes, the measuring-rod of utility becomes unstable and therefore would be inappropriate for measurement.(4) The Hypothesis of Independent Utility: The total utility which a person gets from the whole collection of goods purchased by him is simply the sum total of the separate utilities of the goods. The theory ignores complementarity between goodsThe Law of Diminishing Marginal UtilityOne of the important laws under Marginal Utility analysis is the Law of Diminishing Marginal Utility.The law of diminishing marginal utility is based on an important fact that while total wants of a person are virtually unlimited, each single want is satiable i.e., each want is capable of being satisfied. Since each want is satiable, as a consumer consumes more and more units of a good, the intensity of his want for the good goes on decreasing and a point is reached where the consumer no longer wants it. Thus, the greater the amount of a good a consumer has, the less an additional unit is worth to him or her.Marshall who was the exponent of the marginal utility analysis, stated the law as follows:“The additional benefit which a person derives from a given increase in the stock of a thing diminishes with every increase in the stock that he already has.” In other words, as a consumer increases the consumption of any one commodity keeping constant the consumption of all other commodities, the marginal utility of the variable commodity must eventually decline.This law describes a very fundamental tendency of human nature. In simple words it says that as a consumer takes more units of a good, the extra satisfaction that he derives from an extra unit of a good goes on falling. It is to be noted that it is the marginal utility and not the total utility which declines with the increase in the consumption of a good

Graphically we can represent the relationship between total utility and marginal utility (fig. 11). 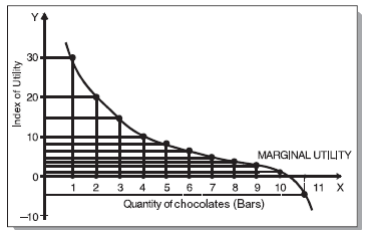 Limitations of the LawThe law of diminishing marginal utility is applicable only under certain assumptions.(i) Homogenous units: The different units consumed should be identical in all respects. The habit, taste, temperament and income of the consumer also should remain unchanged. (ii) Standard units of Consumption: The different units consumed should consist of standard units. If a thirsty man is given water by successive spoonfuls, the utility of the second spoonful of water may conceivably be greater than the utility of the first.(iii) Continuous Consumption: There should be no time gap or interval between the consumption of one unit and another unit i.e. there should be continuous consumption. (iv) The Law fails in the case of prestigious goods: The law may not apply to articles like gold, cash, diamonds etc. where a greater quantity may increase the utility rather than diminish it. It also fails to apply in the case of hobbies, alcohol, cigarettes, rare collections etc.(v) Case of related goods: Utility is not in fact independent. The shape of the utility curve may be affected by the presence or absence of articles which are substitutes or complements. The utility obtained from tea may be seriously affected if no sugar is available and the utility of bottled soft drinks will be affected by the availability of fresh juice.(vi) Based on unrealistic assumptions: The assumptions of cardinal measurability of utility, constancy of marginal utility of money, continuous consumption and consumer rationality are unrealistic.

We see from the above table that when consumer’s consumption increases from 1 to 2 units, his marginal utility falls from ₹30 to ₹ 28. His marginal utility goes on diminishing as he increases his consumption of good X. Since marginal utility for a unit of good indicates the price the consumer is willing to pay for that unit, and since price is assumed to be fixed at ₹ 20, the consumer enjoys a surplus on every unit of purchase till the 6th unit. Thus, when the consumer is purchasing 1 unit of X, the marginal utility is worth ₹ 30 and price fixed is ₹ 20, thus he is deriving a surplus of ₹ 10. Similarly, when he purchases 2 units of X, he enjoys a surplus of ₹ 8 [₹ 28 – ₹20]. This continues and he enjoys consumer’s surplus equal to ₹ 6, 4, 2 respectively from 3rd, 4th and 5th unit. When he buys 6 units, he is in equilibrium because his marginal utility is equal to the market price or he is willing to pay a sum equal to the actual market price and therefore, he enjoys no surplus. Thus, given the price of  ₹ 20 per unit, the total surplus which the consumer will get, is ₹ 10 + 8 + 6 + 4 + 2 + 0 = 30. 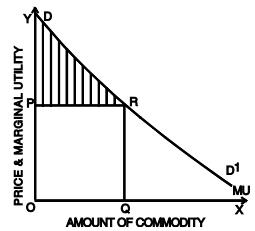 The concept of consumer surplus has important practical applications. Few such applications are listed below: