The document Consumers Equilibrium - Commerce Commerce Notes | EduRev is a part of Commerce category.
All you need of Commerce at this link: Commerce

According to Indifference Curve approach, consumers equilibrium is determined if the following two conditions are satisfied :

MRSxy is the rate at which the consumer is willing to sacrifice Y to obtain one more unit of X. 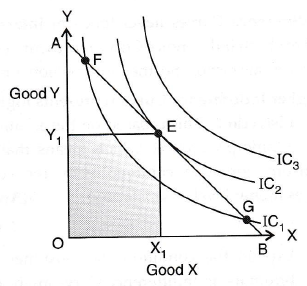 Thus, we can say that ''A consumer is in equilibrium at a point where budget line is tangent to Indifference Curve".

In the diagram, equilibrium is at point E, where the budget line touches the highest attainable indifference curve IC2 within consumer's budget.

Bundles on the Indifference Curve IC3 are not affordable within budget.

Therefore, E is a point of consumer's equilibrium where he maximizes his satisfaction. Point E is also called the"Optimum Consumption Point" where he consumes OX1 of X and OY1 of Y.