3.2.1 Heat transfer between fluids separated by a flat solid wall As shown in fig.3.2, a hot fluid is separated by solid wall from a cold fluid. The thickness of the solid wall is l, the temperature of the bulk of the fluids on hot and cold sides are Th and Tc, respectively. The average temperature of the bulk fluid is T1 and T4, for hot and cold fluid, respectively. The thicknesses of the fictitious thin films on the hot and cold sides of the flat solid are shown by δ1 and δ2. It may be assumed that the Reynolds numbers of both the fluids are sufficiently large to ensure turbulent flow and the surfaces of the solid wall are clean. 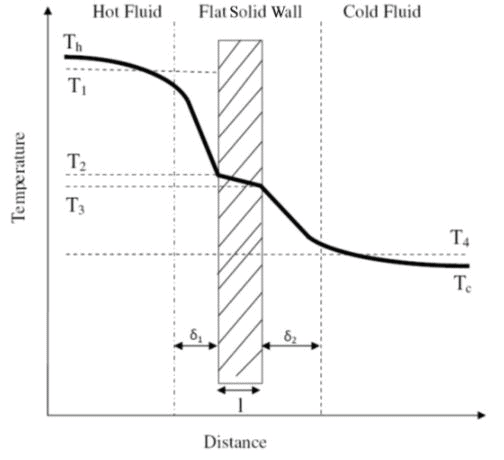 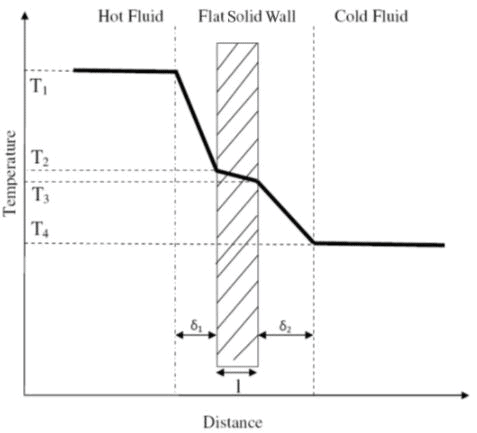 If the thermal conductivity of the wall is k, and the area of the heat transfer is A, the electrical analogy of the fig.3.3 can be represented by fig.3.4, where h1 and h2 are the individual heat transfer coefficient of the hot and cold side of the fluid.

Considering that the heat transfer is taking place at the steady-state through a constant area and the heat loss from other faces are negligible, then the rate of heat transfer on two sides of the wall will be represented by eq. 3.4-3.6.

Rate of heat transfer from the hot fluid to the wall,

Rate of heat transfer through the wall,

Rate of heat transfer from the wall to cold fluid,

At steady state, the rate of heat transfers

are same and can be represented by 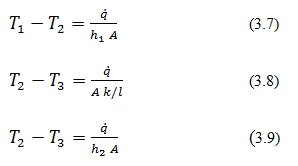 The steady state temperature distribution in a wall is , where x (in meter) is the position in the wall and T is the temperature (in oC). The thickness of the wall is 0.2 m and the thermal conductivity of the wall is 1.2 (W/m·oC). The wall dissipates the heat to the ambient at 30 oC. Calculate the heat transfer coefficient at the surface of the wall at 0.2 m.

Rate of heat transfer by conduction at x=0.2 is given by,

where Ta is the ambient temperature. 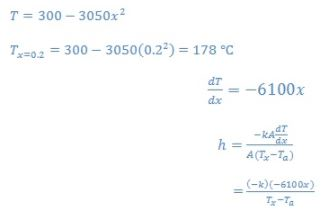 On putting the values and solving,