Plant movement : The movements in plants are not as apparent as in case of animals. Plants generally show movements at a very slow rate. The higher plants are fixed to the substratum by means of roots. They cannot move from one place to another. Therefore, they show movement of their organs only.

1. Tropic movements :- Directional movements or orientations of specific part of a plant in response to external stimuli such as light, force of gravity, chemicals, water are called tropisms or tropic movements.

(i) Phototropism :- Definite direction movement in relation to light. 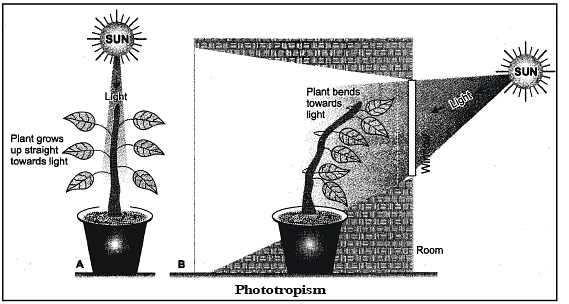 (v) Thigmotropism (Haptotropism) :- Definite direction movement in relation to contact or support. The pea plant develops tendrils which help it to climb up other plants or fences or some other support. These tendrils are sensitive to touch. 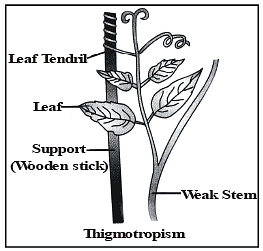 (2) Nastic movements :- Induced by external stimuli such as light, temperature, touch. However, these are not directional movements. Here, the part of the plant does not respond towards or away from the stimulus. Nastic movements include :-

(i) Seismonasty :- The turgor changes occur in thin-walled cells of pulvinus, causing folding and drooping of the compound leaves. Such movements occur in response to touch (shock). These movements are very quick and are best seen in 'touch-me-not' plant (Mimosa pudica), also called 'Chhui-mui' or 'Lajwanti' or 'sensitive plant'. If we touch the leaves of the chhui-mui plant with our finger, we find that all its leaves immediately fold up and droop. After sometime, the leaves regain their original status. Here, no growth is involved. Instead, plant cell changes shape by changing the amount of water in them (turgor changes), resulting in folding up and drooping of leaves.

(iv) Abscisic Acid (ABA) :- It is also known as stress hormone or dormin.