Slow destruction of metals due to chemical reactions on their surface by oxygen, carbon dioxide, moisture, sulphur dioxide, hydrogen sulphide etc. of the atmosphere, is known as corrosion of metals. 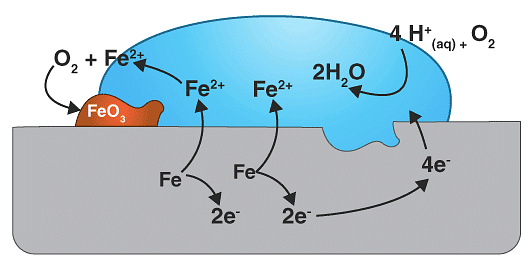 Metal Iron loses electrons.The electrons lost will move to the other side where they combine with H+ ions.

Activity: 1.12: To show that rusting of iron requires both air and water.

Put some anhydrous CaCl2 in test tube 'C' and cork it. Now, have these test tubes for a few days and then observe.

Observations: (i) The nail in test tube 'A' will rust due to nail is exposed to both air and moisture.

(ii) The nail in test tubes 'B' and 'C' are does not rust. Because test tube 'B' contain boiling distilled water and oil which prevents air dissolving in the water.

(iii) In test tube C, the anhydrous CaCl2 is drying agent which absorbs any moisture or air.

Conclusion: This activity clearly shows that both air and water must be necessary for rusting.

The process of rusting is continuous.

Thus, the strength of iron decreases gradually and finally causes damage to buildings, bridges, ships and may other articles especially which are made of iron.

The rusting of iron can be prevented by the following methods :

(i) Iron is protected from rusting by coating it with a thin layer of another metal which is more reactive that iron. Zinc is commonly used for covering iron surfaces. The process of covering iron with zinc is called galvanization.

(ii) The iron pipes which are in contact with water such as ground water pipes are protected from rusting by connecting these with more reactive metals like Mg or Zn.

Examples:(i) When iron is exposed to moisture for a long time, its surface acquires a brown flaky substance called rust and the process is known as rusting. Rust is a mixture of Fe2O3 and Fe(OH)3.

(ii) Copper reacts with CO2 in the air and slowly loses its shiny brown surface and acquires a green coating of basic copper carbonate in moist air.

(iii) Silver articles become black after sometime when exposed to air. (Due to reaction with sulphur in the air to form a black coating of silver sulphide)

(iv)Lead or stainless steel lose their Lusture due to corrosion.

Factors determining the Rate of CorrosionThe process of corrosion is speeded up in the following circumstances.

(i) By painting: The corrosion of metal can be prevented simply by painting the metal surface with grease or varnish that forms a protective layer on the surface of the metal which protects the metal from moisture and air.

(ii) Self prevention: Some metals form their own layer of protection.

Example: When zinc is left exposed to the atmosphere, it combines with the oxygen of the air to form a layer of zinc oxide over its surface. The oxides layer does not allow air to go into the interior of the metal. Thus,  Zinc is protected from corrosion by its own protective layer.

Similarly, aluminium combines with oxygen to form a dull layer of aluminium oxide on its surface which protect the aluminium from further corrosion and aluminium loses its shine very soon.

Example: The pipelines (iron) under the surface of the earth are protected from corrosion by connecting them to a more reactive metal (Magnesium or Zn) which buried in the earth and connected to the pipelines by a wire. 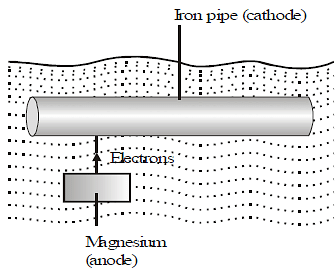 (iv) By alloying: It is a very good method of improving the properties of a metal.

Example: Iron is the most widely used metal. But it is never used in its pure state. This is because pure iron is very soft and stretches easily when hot. But, if it is mixed with a small amount of carbon (about 0.05%) it becomes hard and strong. When iron is mixed with nickel and chromium to form stainless steel it becomes hard and does not rust, i.e. its properties changes. In fact, the properties of any metal can be changed, if it is mixed with some other substances.

An alloy is a homogeneous mixture of two or more metals or non-metal. It can be prepared by first melting the metal and then dissolving the other elements (metal or non-metal) in proper proportions. The properties of an alloy are different from the properties of the constituent metals (from which it made).

Some of the common alloys are:(i) Duralumin: It is an alloy of aluminium. It contains 95% of aluminium, 4% of copper, magnesium is 0.5% and 0.5% of manganese. It is stronger and lighter than aluminium. Duralumin is used for making bodies of air crafts, helicopters. Jets, Kitchen ware like pressure cooker. It is also used for making bodies of ships (due to its resistance to sea water corrosion). It is also known as duralium.

(ii) Amalgam: It is an alloy of mercury and one or more other metals is known as an amalgam. It may be solid or liquid. A solution of sodium metal in liquid mercury metal is called sodium amalgam. Which is used as reducing agent. Amalgam of silver, tin and zinc is used by dentists for filling in teeth.

(iv) Bronze: It is also the alloy of copper. It contain 90% of copper and 10% tin. It is highly resistant to corrosion and used for making utensils, statues, cooking pipes, coins, hardware etc.

(vi) Alloys of Gold: The purity of gold is expressed is terms of 'carats'. Pure gold is known as 24 carats gold. It is very soft due to which it is not suitable for making jewellery. It is alloyed with either silver or copper to make it hard and it more suitable for making ornaments. In India, gold ornaments are usually made of 22 carats gold. It is an alloy of gold with silver or copper.

The Wonder of Ancient Indian Metallurgy

The iron pillar (wrought iron) near the Qutab Minar in Delhi was made around 400 BC by the ironworkers of India. They had developed a process that prevented the wrought iron pillar from rusting even after thousands of years. This is likely because of the formation of a thin film of magnetic oxide (Fe3O4) on the surface as a result of finishing treatment given to the pillar, painting it with a mixture of different salts then heating and quenching (rapid cooling). The iron pillar is 8 metres high and 6000 kg (6 tones) in weight which tells us that ancient Indians had good knowledge of metals and their alloys carbon steel.