COST FUNCTIONCost function refers to the mathematical relation between cost of a product and the various determinants of costs. In a cost function, the dependent variable is unit cost or total cost and the independent variables are the price of a factor, the size of the output or any other relevant phenomenon which has a bearing on cost, such as technology, level of capacity utilization, efficiency and time period under consideration. Cost function is a function which is obtained from production function and the market supply of inputs. It expresses the relationship between costs and output. Cost functions are derived from actual cost data of the firms and are presented through cost curves. The shape of the cost curves depends upon the cost function. Cost functions are of two kinds: They are short-run cost functions and long-run cost functions.SHORT RUN TOTAL COSTSTotal, fixed and variable costs: There are some factors which can be easily adjusted with changes in the level of output. A firm can readily employ more workers if it has to increase output. Similarly, it can purchase more raw materials if it has to expand production. Such factors which can be easily varied with a change in the level of output are called variable factors. On the other hand, there are some factors such as building, capital equipment, or top management team which cannot be so easily varied. It requires comparatively longer time to make changes in them. It takes time to install new machinery. Similarly, it takes time to build a new factory. Such factors which cannot be readily varied and require a longer period to adjust are called fixed factors.Corresponding to the distinction between variable and fixed factors, we distinguish between short run and long run periods of time. Short run is a period of time in which output can be increased or decreased by changing only the amount of variable factors such as, labour, raw materials, etc. In the short run, quantities of fixed factors cannot be varied in accordance with changes in output. If the firm wants to increase output in the short run, it can do so only by increasing the variable factors, i.e., by using more labour and/or by buying more raw materials. Thus, short run is a period of time in which only variable factors can be varied, while the quantities of fixed factors remain unaltered. On the other hand, long run is a period of time in which the quantities of all factors may be varied. In other words, all factors become variable in the long run. 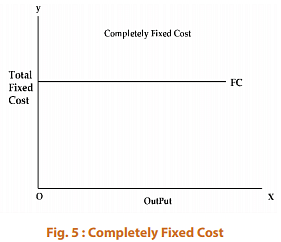 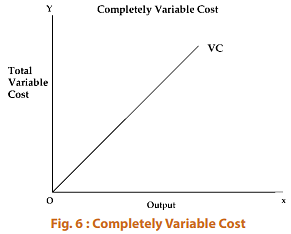 Thus, we find that fixed costs are those costs which are independent of output, i.e., they do not change with changes in output. These costs are a “fixed amount” which are incurred by a firm in the short run, whether the output is small or large. Even if the firm closes down for some time in the short run but remains in business, these costs have to be borne by it. Fixed costs include such charges as contractual rent, insurance fee, maintenance cost, property taxes, interest on capital employed, managers’ salary, watchman’s wages etc. The fixed cost curve is presented in figure 5. Variable costs, on the other hand are those costs which change with changes in output. These costs include payments such as wages of casual labour employed, prices of raw material, fuel and power used, transportation cost etc. If a firm shuts down for a short period, it may not use the variable factors of production and therefore, will not therefore incur any variable cost. Figure 6 above presents completely variable cost curve drawn under the assumption that variable costs change linearly with changes in output. 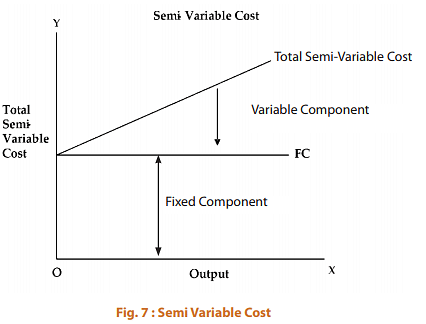 There are some costs which are neither perfectly variable, nor absolutely fixed in relation to the changes in the size of output. They are known as semi-variable costs. Example: Electricity charges include both a fixed charge and a charge based on consumption.There are some costs which may increase in a stair-step fashion, i.e., they remain fixed over certain range of output; but suddenly jump to a new higher level when output goes beyond a given limit. E.g. Costs incurred towards the salary of foremen will have a sudden jump if another foreman is appointed when the output crosses a particular limit. 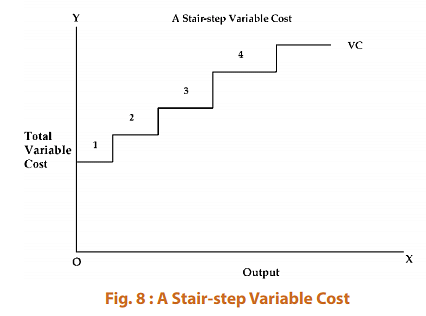 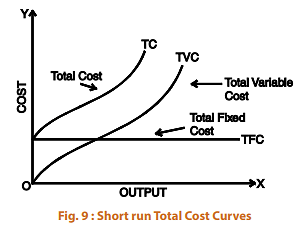 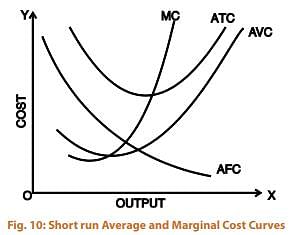 DTC = Change in Total costDQ = Change in OutputorMCn = TCn – TCn-1 Marginal cost curve falls as output increases in the beginning. It starts rising after a certain level of output. This happens because of the influence of the law of variable proportions. The MC curve becomes minimum corresponding to the point of inflexion on the total cost curve. The fact that marginal product rises first, reaches a maximum and then declines ensures that the marginal cost curve of a firm declines first, reaches its minimum and then rises. In other words marginal cost curve of a firm is “U” shaped (see Figure 10). The behaviour of these costs has also been shown in Table 2.

LONG RUN AVERAGE COST CURVEAs stated above, long run is a period of time during which the firm can vary all of its inputs; unlike short run in which some inputs are fixed and others are variable. In other words, whereas in the short run the firm is tied with a given plant, in the long run the firm can build any size or scale of plant and therefore, can move from one plant to another; it can acquire a big plant if it wants to increase its output and a small plant if it wants to reduce its output. The long run being a planning horizon, the firm plans ahead to build the most appropriate scale of plant to produce the future level of output. It should be kept in mind that once the firm has built a particular scale of plant, its production takes place in the short run. Briefly put, the firm actually operates in the short run and plans for the long run. Long run cost of production is the least possible cost of producing any given level of output when all individual factors are variable. A long run cost curve depicts the functional relationship between output and the long run cost of production.In order to understand how the long run average cost curve is derived, we consider three short run average cost curves as shown in Figure 11. These short run average cost curves (SACs) are also called ‘plant curves’. In the short run, the firm can be operating on any short run average cost curve, given the size of the plant. Suppose that there are the only three plants which are technically possible. Given the size of the plant, the firm will be increasing or decreasing its output by changing the amount of the variable inputs. But in the long run, the firm chooses among the three possible sizes of plants as depicted by short run average curves (SAC1 , SAC2 , and SAC3 ). In the long run, the firm will examine with which size of plant or on which short run average cost curve it should operate to produce a given level of output, so that the total cost is minimum. It will be seen from the diagram that up to OB amount of output, the firm will operate on the SAC1 , though it could also produce with SAC2 . Up to OB amount of output, the production on SAC1 results in lower cost than on SAC2 . For example, if the level of output OA is produced with SAC1 , it will cost AL per unit and if it is produced with SAC2 it will cost AH and we can see that AH is more than AL. Similarly, if the firm plans to produce an output which is larger than OB but less than OD, then it will not be economical to produce on SAC1 . For this, the firm will have to use SAC2 . Similarly, the firm will use SAC3 for output larger than OD. It is thus clear that, in the long run, the firm has a choice in the employment of plant and it will employ that plant which yields minimum possible unit cost for producing a given output. 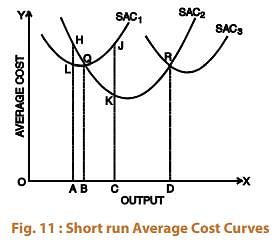 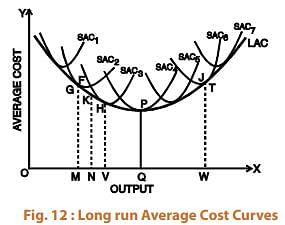