MEANING OF COST SHEET:Cost sheet is a document which provides for the assembly of the estimated detailed cost in respect of a cost centre or a cost unit. It is a detailed statement of the elements of cost arranged in a logical order under different heads. It is prepared to show the detailed cost of the total output for a certain period.It is only a memorandum statement and does not form part of the double entry system. Additional columns can be provided to indicate cost per unit at different stages of production or to enable comparison to be made of the current costs with that of historical costs.

Advantages of Cost Sheet:The main advantages of a cost sheet are:(i) It indicates the break-up of the total cost by elements, i.e. material, labour, overheads, etc.(ii) It discloses the total cost and cost per unit of the units produced.(iii) It facilitates comparison.(iv) It helps the management in fixing selling prices.(v) It acts as a guide to the management and helps in formulating production policy.(vi) It enables to keep control over cost of production.(vii) It helps the management in submitting quotations or preparing estimates for tenders.(viii) It is a simple and useful medium of communication of costs to various levels of management.

ii. Stock of Work-in-Progress:Work-in-progress refers to the semi-finished goods on which some work has been done but which are not yet complete at the end of the period. As such these goods are not yet available for state. The stock of work-in-progress may be valued at prime cost or factory/work cost basis, but generally, it is valued on the basis of work cost.

The adjustment for the stock of work-in-progress valued at works cost should be made as follows:

iii. Stock of Finished Goods:Stock of finished goods refers to the stock of products on which all factory work has been completed. Thus, it is valued at the cost of completed production.

If opening and closing stocks of finished goods are given, then the following adjustment should be made while calculating cost of goods sold:

iv. Carriage Inward or Carriage on Raw Materials Purchased:Carriage inward which is incurred on bringing the raw material purchased should be added while calculating the cost of raw materials consumed as below:

vi. Items Excluded from Costs:The items of expenses, losses or incomes which are related to capital assets, appropriation of profits, amortization of fictitious or intangible assets, abnormal gains and losses or items of purely financial nature do not form part of the costs and these are excluded from cost accounts.The examples of such items include— loss on sale of building or machinery, interest on capital, discount on issue or redemption of shares or debentures, expenses relating to previous period, cash discounts, bad debts, damages payable, penalties and fines, interest or dividend received on investments, transfer fees received, profit on sale of fixed assets, appropriation of profits such as income-tax, dividend paid, transfer of profits to reserves or funds, donations and charities, excess provision for depreciation on fixed assets, amortization of fictitious or intangible assets such as goodwill written off, preliminary expenses written off, patents, trademarks and copyrights written off, capital issue expenses, underwriting commission, loss on issue of shares and debentures written off, etc. Thus, it should be noted that such items-are not taken into consideration (excluded) while preparing a cost sheet.

Illustration 2:
The following extract of costing information related to commodity X for the half year ended 30th June, 2011:

Advertising, discount allowed and selling cost 75 paise per ton sold. 25,600 tonnes of commodity was produced during the period. Illustration 3:
The directors of a manufacturing business require a statement showing the production results of the business for the month of March, 2011.

You are required to construct the statement so as to show:
(a) The value of materials consumed;
(b) The total cost of production;
(c) The cost of goods sold;
(d) The gross profit on goods sold and
(e) The net profit for the month.
Solution: 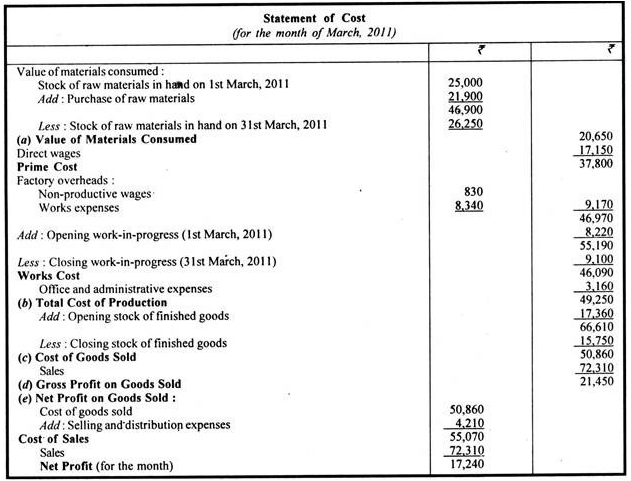 Illustration 4:
The following are the costing records for the year 2011 of a manufacturer:

The manufacturer decided to produce 1,500 units during the year 2008. It is estimated that the cost of raw material will increase by 20%, the labour cost will increase by 10%, 50% of the overhead charges are fixed and the other 50% are variable. The selling expenses per unit will be reduced by 20%. The rate of profit will remain the same.
Prepare a cost statement for the year 2012 showing the profit and selling price per unit.
Solution: 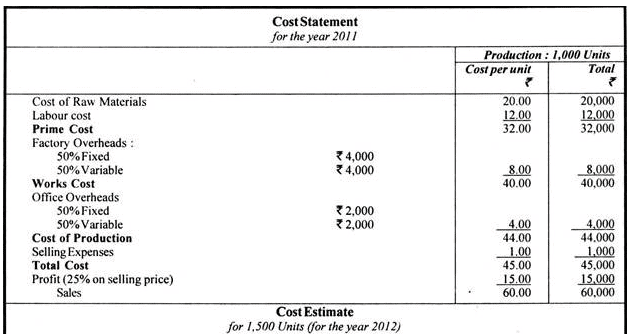 Illustration 5:
In a factory two types of articles viz., ‘O’ and ‘P’ are manufactured. From the following particulars, prepare a statement of cost showing the total cost of each variety and ascertain the total profit.
There is no opening or closing stock:

Cost Sheet Problem 1:
From the following particulars of a manufacturing concern, ascertain the Prime Cost: 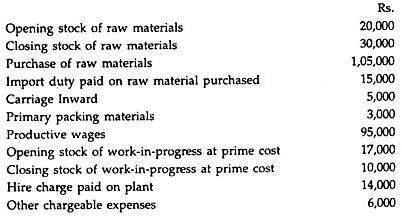 Cost Sheet Problem 2:From the following figures obtained from the costing records of product A ascertain the PRIME COST for the month of August 1997: 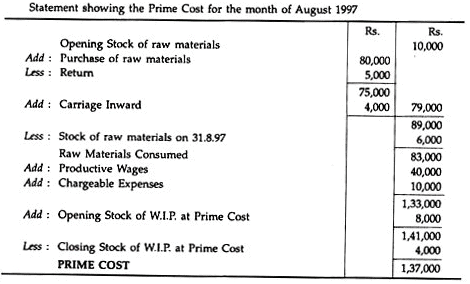 Cost Sheet Problem 3:
From the following information ascertain the Works Cost for the month of August 1997: 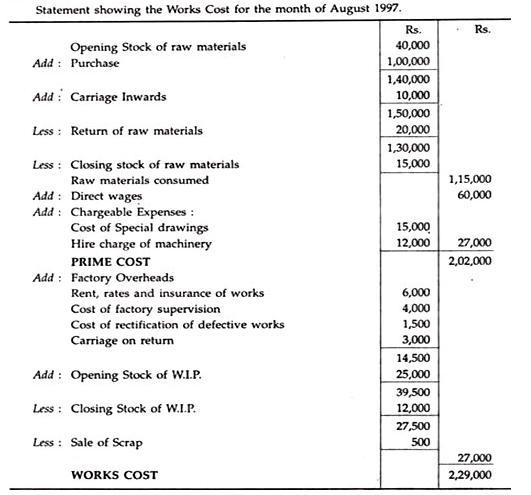 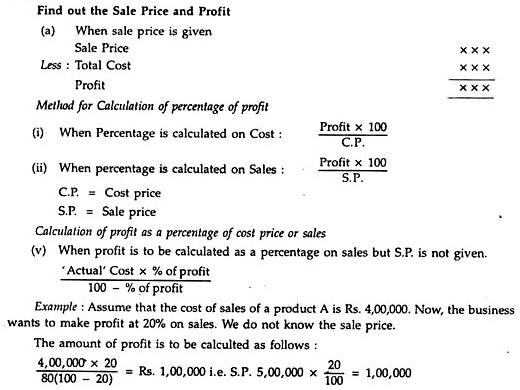 Cost Sheet Problem 4:The following particulars have been collected from a manufacturing concern for the year ended 31.3.1998:

10% on cost of materials. Factory overhead 50% of wages.10% of the casting was rejected and a sum of 6,000 was realised on sale as scrap.10% of finished products was found to be defective and the defective products were rectified at an additional expenditure which is equivalent to 20% of proportionate direct wages.The total output was 10,000 tonnes during the year.Ascertain the manufacturing cost per tonne.Solution:Statement of cost for the year ended 31st March 1998 – Output 9,000 tonnes. 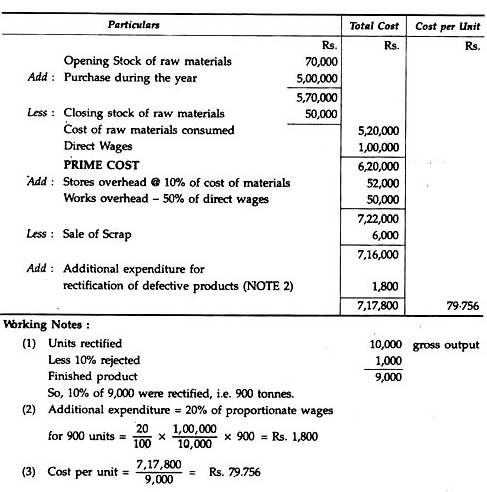 Cost Sheet Problem 5:The following particulars have been obtained from the cost records for the year 1997: 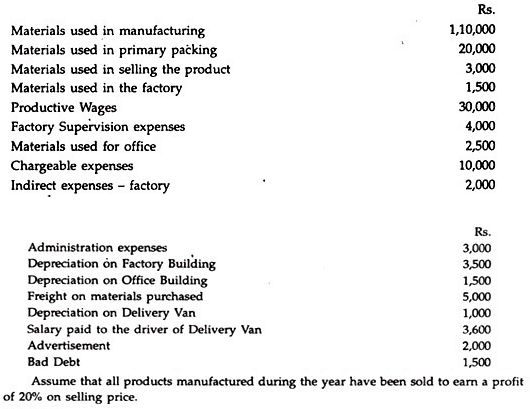