The document D- and f- Block Elements (Transition Elements), JEE Main Notes JEE Notes | EduRev is a part of the JEE Course JEE Revision Notes.
All you need of JEE at this link: JEE 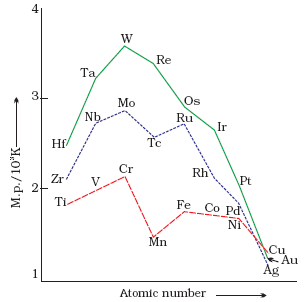 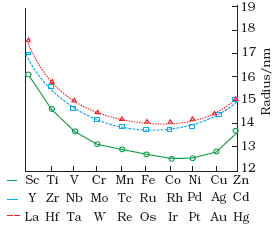 The atomic radii for the elements from Cr to Cu are very close to one another.Radii of 5d series elements are virtually the same as those of corresponding members of 4d series due to lanthanoid contraction.c. Ionisation Potentials:

c. Uses(i)Used in volumetric analysis for estimation of ferrous salts, oxalates, iodides &  H2O2.(ii) Used as oxidizing agent in the laboratory as well as in industry.(iii) Used as disinfectant and germicide.

a.  Lanthanides:It consists of elements that follows lanthanum and involve the filling of 4 subshellElectronic Configuration : [Xe] 4fn+1 5d° 6s2 or [Xe] 4fn 5d1 6s2Oxidation State: +3, +2 and +4.Colouration: Many of the lanthanides ions are coloured in solid state as well as in solutions. The colour is due to the f-f transition since they have partly filled f-orbitals.Lanthanide Contraction:   The steady decrease in the size of lanthanide ions (M3+) with the increase in atomic no. is called lanthanide contraction.Causes:  As we move down the group from left to right in a lanthanide series, the atomic no. increases and for every proton in the nucleus the extra electron goes to 4f orbital. The 4f orbital is too diffused to shield the nucleus effectively, thus there is a gradual increase in the effective nuclear charge experienced by the outer electrons. Consequently , the attraction of the nucleus for the electrons in the outermost shell increases with the increase of atomic number, thus size decreases.

Consequence of Lanthanide Contraction:Separation of Lanthanides: Due to the similar sizes of the lanthanides, it is difficult to separate them but due to lanthanide contraction their properties slightly vary (such as ability to form complexes). The variation in the properties is utilized to separate them.Basic Strength of Hydroxide: Due to the lanthanide contraction, size of M3+ ions decreases and there is increase in covalent character in M–OH and hence basic character decreases.Similarity of second and third transition series: The atomic radii of second row transition elements are almost similar to those of the third row transition elements because the increase in size on moving down the group from second to third transition elements is cancelled by the decrease in size due to the lanthanide  contractionb. Actinides:It consists of elements that follow Actinium and involve the filling of 5f subshell.These are radioactive substances.7s2 is stable configuration for actinides.Show +3,+4,+5,+6 & +7 oxidation state.Lower ionization enthalpies than lanthinoids.