The analysis or design of a transistor amplifier requires knowledge of both the dc and ac response of the system.In fact, the amplifier increases the strength of a weak signal by transferring the energy from the applied DC source to the weak input ac signal

What is biasing circuit?

Purpose of the DC biasing circuit Equation for the input loop is: IB = [VCC – VBE] / RB where VBE = 0.7V, thus substituting the other given values in the equation, we get

A fixed bias circuit with given values of VCC, RC and RB can be analyzed ( means, determining the values of IBQ, ICQ and VCEQ) using the concept of load line also. Here the input loop KVL equation is not used for the purpose of analysis, instead, the output characteristics of the transistor used in the given circuit and output loop KVL equation are made use of.

Such line drawn as per the above equation is known as load line, the slope of which is decided by the value of RC ( the load). As IB is varied, the Q point shifts accordingly on the load line either up or down depending on IB increased or decreased respectively.As RC is varied, the Q point shifts to left or right along the same IB line since the slope of the line varies. As RC increases, slope reduces ( slope is -1/RC) which results in shift of Q point to the left meaning no variation in IC and reduction in VCE . Thus if the output characteristics is known, the analysis of the given fixed bias circuit or designing a fixed bias circuit is possible using load line analysis as mentioned above. 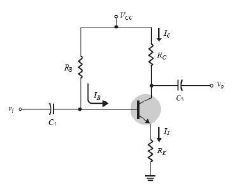 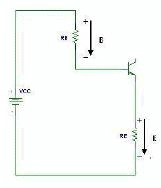 IC is almost same as IE