Goals of the lesson

Students are expected to learn about the classification of d.c generators and their characteristics in this lesson.  After going through this lesson they will be able to:

D.C generators may be classified as (i) separately excited generator, (ii) shunt generator, and (iii) series generator and (iv) compound generator.  In a separately excited generator field winding is energised from a separate voltage source in order to produce flux in the machine. So long the machine operates in unsaturated condition the flux produced will be proportional to the field current. In order to implement shunt connection, the field winding is connected in parallel with the armature. It will be shown that subject to fulfillment of certain conditions, the machine may have sufficient field current developed on its own by virtue of its shunt connection.

In series d.c machine, there is one field winding wound over the main poles with fewer turns and large cross sectional area. Series winding is meant to be connected in series with the armature and naturally to be designed for rated armature current. Obviously there will be practically no voltage or very small voltage due to residual field under no load condition (Ia = 0). However, field gets strengthened as load will develop rated voltage across the armature with reverse polarity, is connected and terminal voltage increases. Variation in load resistance causes the terminal voltage to vary. Terminal voltage will start falling, when saturation sets in and armature reaction effect becomes pronounced at large load current. Hence, series generators are not used for delivering power at constant voltage. Series generator found application in boosting up voltage in d.c transmission system.

A compound generator has two separate field coils wound over the field poles. The coil having large number of turns and thinner cross sectional area is called the shunt field coil and the other coil having few number of turns and large cross sectional area is called the series field coil. Series coil is generally connected in series with the armature while the shunt field coil is connected in parallel with the armature. If series coil is left alone without any connection, then it becomes a shunt machine with the other coil connected in parallel. Placement of field coils for shunt, series and compound generators are shown in figure 38.1.  Will develop rated voltage across the armature with reverse polarity.

Characteristics of a separately excited generator

No load or Open circuit characteristic

In this type of generator field winding is excited from a separate source, hence field current is independent of armature terminal voltage as shown on figure (38.2). The generator is driven by a prime mover at rated speed, say n rps. With switch S in opened condition, field is excited via a potential divider connection from a separate d.c source and field current is gradually increased. The field current will establish the flux per pole φ. The voltmeter V connected across the armature terminals of the machine will record the generated emf

Remember pz/a  is a constant (k) of the machine. As field current is increased, EG will increase. EG versus If plot at constant speed n is shown in figure (38.3a). 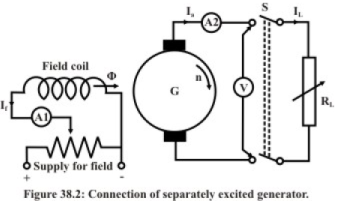 It is important to note that if O.C.C is known at a certain speed nl, O.C.C at another speed n2 can easily be predicted. It is because for a constant field current, ratio of the generated voltages becomes the ratio of the speeds as shown below.

Therefore points on O.C.C at n2 can be obtained by multiplying ordinates of O.C.C at n1 with the ratio n2/n1 O.C.C at two different speeds are shown in the following figure (38.4). 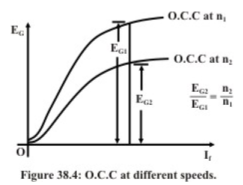 Load characteristic essentially describes how the terminal voltage of the armature of a generator changes for varying armature current Ia. First at rated speed, rated voltage is generated across the armature terminals with no load resistance connected across it (i.e., with S opened) by adjusting the field current.  So for Ia = 0, V = Eo should be the first point on the load characteristic. Now with S is closed and by decreasing RL from infinitely large value, we can increase Ia gradually and note the voltmeter reading. Voltmeter reads the terminal voltage and is expected to decrease due to various drops such as armature resistance drop and brush voltage drop. In an uncompensated generator, armature reaction effect causes additional voltage drop. While noting down the readings of the ammeter A2 and the voltmeter V, one must see that the speed remains constant at rated value. Hence the load characteristic will be drooping in nature as shown in figure (38.3b)

Characteristics of a shunt generator

Field coil (F1, F2) along with a series external resistance is connected in parallel with the armature terminals (A1, A2) of the machine as shown in figure (38.5). Let us first qualitatively explain how such connection can produce sufficient voltage. Suppose there exists some residual field. Therefore, if the generator is driven at rated speed, we should expect a small voltage (kφresn) to be induced across the armature. But this small voltage will be directly applied across the field circuit since it is connected in parallel with the armature. Hence a small field current flows producing additional flux. If it so happens that this additional flux aids the already existing residual flux, total flux now becomes more generating more voltage. This more voltage will drive more field current generating more voltage. Both field current and armature generated voltage grow cumulatively.

This growth of voltage and the final value to which it will settle down can be understood by referring to (38.6) where two plots have been shown. One corresponds to the O.C.C at rated speed and obtained by connecting the generator in separately excited fashion as detailed in the preceding section. The other one is the V-I characteristic of the field circuit which is a straight line passing through origin and its slope represents the total field circuit resistance. Suppose a shunt generator has built up voltage at a certain speed. Now if the speed of the prime mover is reduced without changing Rf, the developed voltage will be less as because the O.C.C at lower speed will come down (refer to figure 38.8). If speed is further reduced to a certain critical speed (ncr), the present field resistance line will become tangential to the O.C.C at ncr. For any speed below ncr, no voltage built up is possible in a shunt generator. 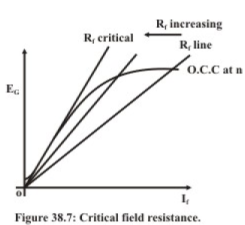 A shunt generator driven by a prime mover, can not built up voltage if it fails to comply any of the conditions listed below.

With switch S in open condition, the generator is practically under no load condition as field current is pretty small. The voltmeter reading will be Eo as shown in figures (38.5) and (38.6). In other words, Eo and Ia = 0 is the first point in the load characteristic. To load the machine S is closed and the load resistances decreased so that it delivers load current IL. Unlike separately excited motor, here IL ≠ Ia. In fact, for shunt generator, Ia = IL - If. So increase of IL will mean increase of Ia as well. The drop in the terminal voltage will be caused by the usual Iara drop, brush voltage drop and armature reaction effect. Apart from these, in shunt generator, as terminal voltage decreases, field current hence φ also decreases causing additional drop in terminal voltage. Remember in shunt generator, field current is decided by the terminal voltage by virtue of its parallel connection with the armature. Figure (38.9) shows the plot of terminal voltage versus armature current which is called the load characteristic. One can of course translate the V versus Ia characteristic into V versus IL characteristic by subtracting the correct value of the field current from the armature current. For example, suppose the machine is loaded such that terminal voltage becomes V1 and the armature current is Ia1. The field current at this load can be read from the field resistance line corresponding to the existing voltage V1 across the field as shown in figure (38.9). Suppose If1 is the noted field current. Therefore, ILl = Ia1- If1.Thus the point [Ia1, V1] is translated into [ILl, V1] point. Repeating these step for all the points we can get the V versus IL characteristic as well. It is interesting to note that the generated voltage at this loading is EG1 (obtained from OCC corresponding to If1). Therefore the length PQ must represents sum of all the voltage drops that has taken place in the armature when it delivers Ia. We have seen in the preceding section that for a particular load current Ia, the terminal voltage V and the generated voltage EG are related by EG −V ≈ Ia ra . This relationship along with OCC and Rf line can be used to predict the load characteristic. This can be done in following two ways.

In this method which is also graphical, we try to estimate the terminal voltage V for a given armature current Ia. Following steps may be adopted for the purpose.

As we go on decreasing the load resistance, terminal voltage falls. Field being connected across the armature, φ also falls reducing the generated voltage EG which was not the case with separately excited generator where φ produced was independent of the terminal voltage of the generator. Thus after reaching Ia max, any further decrement in the load resistance causes EG to fall substantially to make Ia < Ia max, In fact, If we reduce RL to the extent that RL = 0 (i.e., putting a short circuit across the terminals), field current becomes zero making EG = residual voltage = OD. Therefore steady short circuit current of the generator will be pretty small and equal to

As introduced earlier, compound machines have both series and shunt field coils. On each pole these two coils are placed as shown in figure 38.1. Series field coil has low resistance, fewer numbers of turns with large cross sectional area and connected either in series with the armature or in series with the line. On the other hand shunt field coil has large number of turns, higher resistance, small cross sectional area and either connected in parallel across the armature or connected in parallel across the series combination of the armature and the series field. Depending on how the field coils are connected, compound motors are classified as short shunt and long shunt types as shown in figures 38.12 and 38.13 To understand the usefulness of the series coil in a compound machine let us undertake the following simple calculations. Suppose as a shunt generator (series coil not connected) 300 AT/pole is necessary to get no load terminal voltage of 220 V. Let the terminal voltage becomes 210 V at rated armature current of 20 A. To restore the terminal voltage to 220 V, shunt excitation needs to be raised such that AT/pole required is 380 at 20 A of rated current. As a level compound generator, the extra AT (380-300 = 80) will be provided by series field. Therefore, number of series turns per pole will be 80/20 = 4. Thus in a compound generator series field will automatically provide the extra AT to arrest the drop in terminal voltage which otherwise is inevitable for a shunt generator.

For the differentially compounded generator where series field mmf opposes the shunt field mmf the terminal voltage decreases fast with the increase in the load current.