The document DE Broglie’s Explanation of Bohr’s Second Postulate of Quantisation Notes | EduRev is a part of the JEE Course Physics For JEE.
All you need of JEE at this link: JEE

De Broglie’s Explanation to the Quantization of Agular Momentum of Electron:

The behaviour of particle waves can be viewed analogously to the waves travelling on a string. Particle waves can lead to standing waves held under resonant conditions. When a stationary string is plucked, a number of wavelengths are excited. On the other hand, we know that only those wavelengths survive which form a standing wave in the string, that is, which have nodes at the ends. 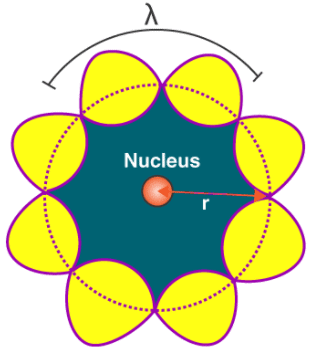 Quantization of Angular Momentum of Electron

Thus, in a string, standing waves are formed only when the total distance travelled by a wave is an integral number of wavelengths. Hence, for any electron moving in kth circular orbit of radius rk, the total distance is equal to the circumference of the orbit, 2πrk.

Let this be equation (2).Where mvk is the momentum of an electron revolving in the kth orbit. Inserting the value of λ from equation (2) in equation (1) we get,2πrk = kh/mvk

mvkrk = kh/2πHence, de Broglie hypothesis successfully proves Bohr’s second postulate stating the quantization of angular momentum of the orbiting electron. We can also conclude that the quantized electron orbits and energy states are due to the wave nature of the electron.