Most successful local area networking technology of last 20 years. Developed in the mid-1970s by researchers at the Xerox Palo Alto Research Centers (PARC). Uses CSMA/CD technology. Carrier Sense Multiple Access with Collision Detection. A set of nodes send and receive frames over a shared link. Carrier sense means that all nodes can distinguish between an idle and a busy link. Collision detection means that a node listens as it transmits and can therefore detect when a frame it is transmitting has collided with a frame transmitted by another node.

Uses ALOHA (packet radio network) as the root protocol. Developed at the University of Hawaii to support communication across the Hawaiian Islands. For ALOHA the medium was atmosphere, for Ethernet the medium is a coax cable. DEC and Intel joined Xerox to define a 10-Mbps Ethernet standard in 1978. This standard formed the basis for IEEE standard 802.3. More recently 802.3 has been extended to include a 100-Mbps version called Fast Ethernet and a 1000-Mbps version called Gigabit Ethernet. An Ethernet segment is implemented on a coaxial cable of up to 500 m.

This cable is similar to the type used for cable TV except that it typically has an impedance of 50 ohms instead of cable TV’s 75 ohms.  Hosts connect to an Ethernet segment by tapping into it.  A transceiver (a small device directly attached to the tap) detects when the line is idle and drives signal when the host is transmitting.  The transceiver also receives incoming signal. The transceiver is connected to an Ethernet adaptor which is plugged into the host. The protocol is implemented on the adaptor.  Multiple Ethernet segments can be joined together by repeaters.

A repeater is a device that forwards digital signals.  No more than four repeaters may be positioned between any pair of hosts.  An Ethernet has a total reach of only 2500 m.  Any signal placed on the Ethernet by a host is broadcast over the entire network  Signal is propagated in both directions.  Repeaters forward the signal on all outgoing segments. Terminators attached to the end of each segment absorb the signal.  Ethernet uses Manchester encoding scheme.  New Technologies in Ethernet. Instead of using coax cable, an Ethernet can be constructed from a thinner cable known as 10Base2 (the original was 10Base5). 10 means the network operates at 10 Mbps. Base means the cable is used in a baseband system.  2 means that a given segment can be no longer than 200 m.  New Technologies in Ethernet. Another cable technology is 10BaseT.  T stands for twisted pair Limited to 100 m in length  With 10BaseT, the common configuration is to have several point to point segments coming out of a multiway repeater, called Hub

The algorithm is commonly called Ethernet’s Media Access Control (MAC).  It is implemented in Hardware on the network adaptor.

Frame format Preamble (64bit): allows the receiver to synchronize with the signal (sequence of alternating 0s and 1s).  Host and Destination Address (48bit each).  Packet type (16bit): acts as demux key to identify the higher level protocol.  Data (up to 1500 bytes).  Minimally a frame must contain at least 46 bytes of data.  Frame must be long enough to detect collision.

Each host on an Ethernet (in fact, every Ethernet host in the world) has a unique Ethernet Address. The address belongs to the adaptor, not the host.  It is usually burnt into ROM. Ethernet addresses are typically printed in a human readable format  As a sequence of six numbers separated by colons.  Each number corresponds to 1 byte of the 6 byte address and is given by a pair of hexadecimal digits, one for each of the 4-bit nibbles in the byte  Leading 0s are dropped.

To ensure that every adaptor gets a unique address, each manufacturer of Ethernet devices is allocated a different prefix that must be prepended to the address on every adaptor they build AMD has been assigned the 24bit prefix 8:0:20

A ring toplogy network developed in the late 1960s. Supported mainly by IBM. Pushed into the background by Ethernet in the 1990s. a LAN protocol which resides at the data link layer (DLL) of the OSI model Shielded Twisted Pair with unique hermaphroditic connectors (IBM “Type 1”) or Symmetric pair. Speed: –   4 Mbps (1985) 16 Mpbs (1989, IBM Ring operation. When nobody is transmitting a token circles. When a station needs to transmit data, it converts the token into a data frame. When the sender receives its own data frame, it converts the frame back into a token.

If an error occurs and no token frame, or more than one, is present, a special station (“Active Monitor”) detects the problem and removes and/or reinserts tokens as necessary. The Abort frame: used to abort transmission by the sending station 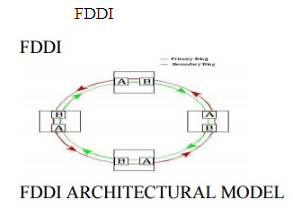 Wireless links transmit electromagnetic signals.  Radio, microwave, infrared. Wireless links all share the same “wire” (so to speak). The challenge is to share it efficiently without unduly interfering with each other. Most of this sharing is accomplished by dividing the “wire” along the dimensions of frequency and space. Exclusive use of a particular frequency in a particular geographic area may be allocated to an individual entity such as a corporation. These allocations are determined by government agencies such as FCC (Federal Communications Commission) in USA. Specific bands (frequency) ranges are allocated to certain uses.  Some bands are reserved for government use. Other bands are reserved for uses such as AM radio, FM radio, televisions, satellite communications, and cell phones Specific frequencies within these bands are then allocated to individual organizations for use within certain geographical areas. Finally, there are several frequency bands set aside for “license exempt” usage  Bands in which a license is not needed. Devices that use license-exempt frequencies are still subject to certain restrictions. The first is a limit on transmission power. This limits the range of signal, making it less likely to interfere with another signal. For example, a cordless phone might have a range of about 100 feet. The second restriction requires the use of Spread Spectrum technique Idea is to spread the signal over a wider frequency band , So as to minimize the impact of interference from other devices Originally designed for military use  Frequency hopping

Transmitting signal over a random sequence of frequencies  First transmitting at one frequency, then a second, then a third… The sequence of frequencies is not truly random, instead computed algorithmically by a pseudorandom number generator.  The receiver uses the same algorithm as the sender, initializes it with the same seed, and is  Able to hop frequencies in sync with the transmitter to correctly receive the frame. A second spread spectrum technique called Direct sequence.  Represents each bit in the frame by multiple bits in the transmitted signal.  For each bit the sender wants to transmit.  It actually sends the exclusive OR of that bit and n random bits. The sequence of random bits is generated by a pseudorandom number generator known to both the sender and the receiver.  The transmitted values, known as an n-bit chipping code, spread the signal across a frequency band that is n times wider.  Wireless technologies differ in a variety of dimensions.

How much bandwidth they provide.  How far apart the communication nodes can be  Four prominent wireless technologies

Class of switches that is used to forward packets between shared-media LANs such as Ethernets  Known as LAN switches. Referred to as Bridges. Suppose you have a pair of Ethernets that you want to interconnect One approach is put a repeater in between them. It might exceed the physical limitation of the Ethernet.  No more than four repeaters between any pair of hosts.  No more than a total of 2500 m in length is allowed. An alternative would be to put a node between the two Ethernets and have the node forward frames from one Ethernet to the other. This node is called a Bridge. A collection of LANs connected by one or more bridges is usually said to form an Extended LAN

Forward all broadcast/multicast frames.  Current practice.  Learn when no group members downstream. Accomplished by having each member of group G send a frame to bridge multicast address with G in source field

Spanning tree algorithm does not scale

Broadcast does not scale,Do not accommodate heterogeneity