What Is an Investigation in Physics?

Physics is a science that attempts to explain the whole universe by boiling it down to a set of simple explanations and mathematical laws. Like all sciences, a big part of how this is done is through conducting investigations and collecting data. So it's important for any budding physicist to know how to collect data reliably, and what to do with it when you have it.

In a physics experiment, it's important that every other variable remain exactly the same. (In our surface area experiment, that would be the same mass of object, the same distance to fall, the same environmental conditions, the same material, and so on.) If any other variable changes, it won't be possible to say for sure that the two variables you're investigating are really related the way they appear to be.

When collecting data for a physics experiment, there are a couple of things to keep in mind: measurement technique, trials, and experimental uncertainty.

Your measurement technique is important because it affects the quality of your data. If you're measuring a distance, for example, your eye should be directly in line with the ruler or tape measure you're using. Or if you're measuring the time it takes for the object to fall, you should use your eyes to see when the object reaches a marked point - the speed of light is faster than the speed of sound, so eyes are better than ears.

It's also important to do multiple trials, which means repeating your experiment several times. The more trials you do, the better your average value will be.

Last of all, you need to always consider the uncertainty involved in any measurement. Some of this uncertainty comes from the instruments, which we call measurement error. For example, a ruler might only measure to the nearest half millimeter at best - if your eyes are bad, perhaps only the nearest millimeter. And a weighing scale also has an accuracy range, which you can check in the instruction book, or by contacting the manufacturer. (The number of decimal places can tell you the accuracy, but that isn't always reliable.) The measurement uncertainty should always be noted down. For example, maybe you measured 56 millimeters, plus or minus 1 millimeter.

But there is also human uncertainty, which we call random error. Nobody can press the stopwatch button at exactly the right time, all the time. Your results will vary around the true value, and an average will be needed. But human reaction time should be noted down. Perhaps you can react quickly enough to get a measurement to the nearest 0.2 seconds. So if you measure a time of 5 seconds, it's really 5 seconds plus or minus 0.2 seconds.

Analyzing data is when the investigation is brought together to come to some conclusions. In other words, you look at your results and consider what they might mean. In physics, the first and most important graph we create is a scatter plot showing how the two variables relate to each other. We generally put the dependent variable on the y-axis of the graph and the independent variable on the x-axis. Plot your data as little crosses.

Next, plot a line of best fit through the data. This is a line that best represents the data shown, one that goes as close as possible to all of the data points. 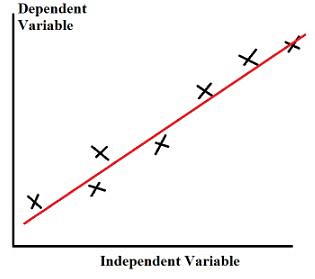 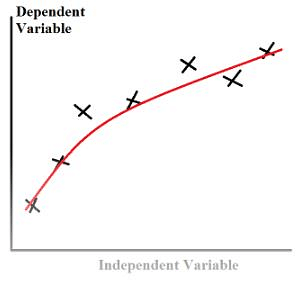 A line of best fit doesn't have to be straight - if it looks like the data is curved, draw a curve.