Data Interpretation is the section that consists of charts and tables, myriad of graphs, from which candidates will have to analyze and glean data.

How to solve Data Interpretation questions

Number of Employees of various departments of Parle India for the year 2011 to 2017 is given. Answer the questions based on the data provided.

The correct answer is option (c).

As we need the total no of employees, in each department, in question paper only after the last column you can write down the sum of no. of employees.

2. In how many years, the number of employees in the production department is more than 50 % of total employees?

The correct answer is option (d).

As in the last question you would have calculated the total number of employees in different years, this question can be solved orally by just looking at numbers. More than 50% would require you to just calculate 50% of the total employees, for example, 315/2=102(approx.), 407/2=203(approx.) while no of employees in 2012 in the production dept. is 230 hence more than 50% similarly calculate for other years.

Percentage of employees of production department wrt to total employees:

Except 2011 in all other years the percentage of production department employees is more than 50%.

Try yourself:Study the following table and answer the questions based on it.

What is the average amount of interest per year which the company had to pay during this period?

Example 2: The bar graph given below shows the sales of books (in thousand number) from six branches of a publishing company during two consecutive years 2000 and 2001. 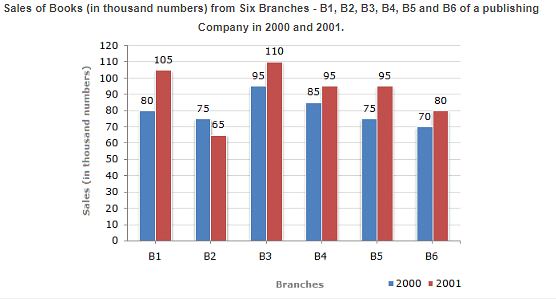 The correct answer is option (d).

The correct answer is option (c). 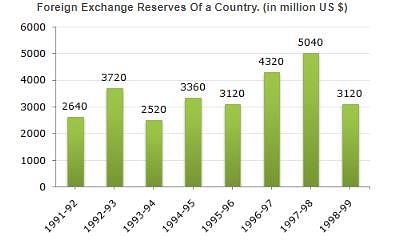 Average foreign exchange reserves over the given period = 3480 million US $.

View Solution
Try yourself:For which year, the percent increase of foreign exchange reserves over the previous year, is the highest? 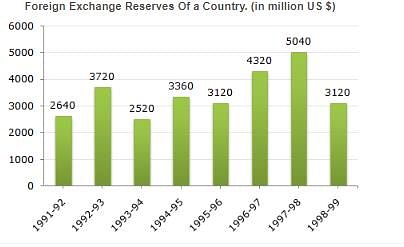 The percentage increase in reserves during these years compared to previous year are: