In a first-of-its-kind study, the Zoological Survey of India (ZSI) recently projected that the numbers of the Malay Giant Squirrel in India could decrease by 90% by 2050, and it could be extinct by then if urgent steps are not taken. 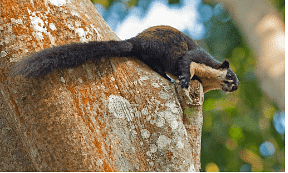 The International Union for Conservation of Nature (IUCN) has recently highlighted that the Great Barrier Reef of Australia is in a critical state and deteriorating as the waters in which it lies are warmed up by climate change.

These polyps have microscopic algae living within their tissues, called zooxanthellae. A mutualistic (symbiotic) relationship exists between corals and algae.

It was selected in 1981 as a World Heritage Site.

➤ The International Union for Nature Conservation

The Peacock soft-shelled turtle (a turtle of a vulnerable species) was recently rescued from the Assam Silchar fish market. 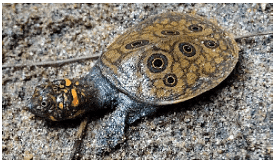 objectives of limiting global warming to well below 2 ° C this century and pursuing 1.5 ° C.

In the Organization for Economic Cooperation and Development (OECD) economies, GHG emissions are declining and are increasing in non-OECD economies.

The majority of emissions are accounted for by G20 countries:

When considering per capita emissions, the ranking of countries changes.

➤ On emissions based on consumption:

At similar rates, both emission types have declined.

The sector with the lowest emission drop due to pandemics:

➤ About the Performance Index on Climate Change (CCPI):

➤ Aim: It aims to increase transparency in international climate policy and makes it possible to compare the efforts and progress made by individual countries on climate protection.

➤ Criteria: Four categories are considered by the CCPI, with 14 indicators: greenhouse gas emissions (40% of the overall score), renewable energy (20%), energy use (20%) and climate policy (20 per cent).

➤ The Performance of India:

Not only did the country establish a comprehensive energy efficiency policy - National Mission on Enhanced Energy Efficiency  (NMEEE), but successful demand-side management programs have also been implemented for consumers and municipal corporations to gradually achieve overall energy savings while mitigating climate change. NMEEE is a NAPCC component.

Moolamylliang, a village in the East Jaintia Hills district of Meghalaya, progresses to become a greener place in the midst of abandoned rat-hole mining pits.

Although the NGT ban did not stop the district's illegal mining, it helped reform Moolamylliang.

There are three notable characteristics of coal mining (and elsewhere in Meghalaya).

It is a term used for a dangerous and arduous mining technique in which miners crawl into winding underground tunnels with a diameter of just 4-5 feet to extract coal with a pickaxe from the deep seams.

It is a surface mining method of extracting rock or minerals from the earth by removing them from an open-air pit, sometimes referred to as an open-air pit borrow.

Since the 6th Schedule does not explicitly refer to mining, environmental activists call for central mining and environmental legislation to apply to the coal trade.

The Act allows local and global companies to extract commercial coal without imposing any end-user restrictions, and also extends the validity of clearances for mining leases expiring in 2020.