Questions are being raised about the sustainability of paddy-wheat cultivation, particularly in Punjab, in the context of the ongoing farmers' protests.

For the first time, a Himalayan serow was observed in the Himalayan cold desert region (Spiti, Himachal Pradesh). 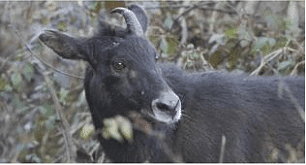 The Himalayas' Serow resembles a cross between a goat, an ass, a cow, and a pig.

It's a medium-sized mammal with a big head, a thick neck, short limbs, long ears that look like a mule, and a dark coat of hair.

The Serows of the Himalayas are herbivores.

➤ The most recent sighting:

Locally, the Sanctuary is well known for its extensive alpine pastures and the numerous treks, trails and passes that link it to the neighbouring Great Himalayan National Park and Pin Valley National Park.

➤ Composition: The fuel E20 is a blend of 20% ethanol and gasoline.

The current permissible blending rate is 10% of ethanol,  although India accounted for only 5.6% of blending in 2019.

It will help to reduce emissions of hydrocarbons, carbon dioxide, etc.

It will help to lower the bill for oil imports, save foreign exchange and increase energy security.

Green fuel is a type of fuel distilled from plants and animal materials, also known as biofuel, which some belief is more environmentally friendly than the widely used fossil fuels that power most of the world.

The Policy allows surplus food grains to produce ethanol for blending with petrol with the approval of the National Biofuel Coordination Committee.

On 21 December, in Kashmir valley, the 40-day intense winter period "Chillai Kalan" began with sub-zero night temperatures across the region.

Ablation: It involves combined processes that remove snow or ice from the surface of a glacier or a snow-field (such as sublimation, fusion or melting, evaporation).

Glacier mass equilibrium: It is simply the ice gain and loss from the glacier system.

The frequency of this process has been increased by global warming.