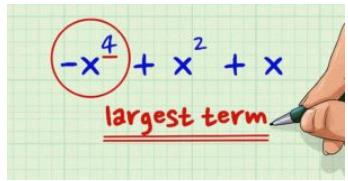 Polynomial in One Variable

Note: Exponents of variables of a polynomial .i.e. degree of polynomials should be whole numbers.

How to find the Degree of a Polynomial?

There are 4 simple steps are present to find the degree of a polynomial:-

Classification Based on the Degree of the Equation

Based on the degree, the equation can be linear, quadratic, cubic, and bi-quadratic, and the list goes on. Importance of Degree of polynomial

The degree of terms is a major deciding factor whether an equation is homogeneous or not. A polynomial of more that one variable is said to be homogeneous if the degree of each term is the same. For example, 2x7+5x5y2-3x4y3+4x2y5 is a homogeneous polynomial of degree 7 in x and y.Relation of Degree of Polynomials with Zeroes of Equation

Theorem 1: A polynomial f(x) of the nth degree cannot vanish for more than n values of x unless all its coefficients are zero.

The above table shows possible real zeros /solutions; actual real solutions can be less than the degree of the equation.

Before going to start other sections of Polynomials, try to solve the below-given question.

A Question for You