The document Depression in Freezing Point JEE Notes | EduRev is a part of JEE category.
All you need of JEE at this link: JEE

THIRD COLLIGATIVE PROPERTYDepression in Freezing PointFreezing point of a substance is the temperature at which it's liquid and the solid phases have the same vapour pressure.Key concept: As we already know from the definition of colligative properties that when a solution freezes, it is only the pure solvent which separated out in the solid form. It is this that causes a depression in the freezing point. 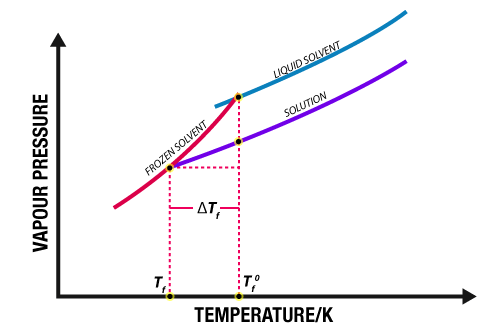 If the difference between the freezing point of the solvent and the solution is represented as ΔTf,Elevation of boiling point, (ΔTb) = Boiling point of the solution - Boiling point of pure solvent= Tb -Tb˚ Experimentally, it is observed that Depression in Freezing point is directly proportional to molal concentration of solute dissolved in definite amount of the solvent.ΔTf ∝ molalityΔTf = Kf × molality   .....(1)ΔTf = Kf × mWhere Kf is proportionality constant and is known as the molal Depression point constant or the Cryoscopic constant. It has the units of degree kg mol-1 or K kg mol-1.Molality can be written asMolality (m) = Number of moles of Solute/Mass of Solvent in Kg

Significance of Kf ΔTf = Kfm. So, if m = 1 i.e. one mole of solute is dissolved in one kg of the solvent, then, ΔTf = Kf.Thus, the molal freezing point depression constant is equal to the depression in the freezing point produced when one mole of solute is dissolved in 1 kg of the solvent.The values of molal elevation constant (Kb) for some common solvents are given in Table.

Kb and Kf can be obtained from the following relationships: