There are numerous yield criteria, going as far back as Coulomb (1773). Many of these were originally developed for brittle materials but were later applied to ductile materials. Some of the more common ones will be discussed briefly here.

Using this, a yield surface may be drawn, as shown in figure- 3.1.4.1.1. Yielding occurs when the state of stress is at the boundary of the rectangle. Consider, for example, the state of stress of a thin walled pressure vessel. Here σ1= 2σ2, σ1 being the circumferential or hoop stress and σ2 the axial stress. As the pressure in the vessel increases the stress follows the dotted line. At a point (say) a, the stresses are still within the elastic limit but at b, σ1 reaches σy although σ2 is still less than σy. Yielding will then begin at point b. This theory of yielding has very poor agreement with experiment. However, the theory has been used σ2 successfully for brittle materials. 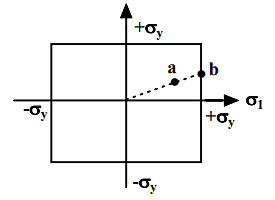 According to this theory, yielding will occur when the maximum principal strain just exceeds the strain at the tensile yield point in either simple tension or compression. If ε1 and ε2 are maximum and minimum principal strains corresponding to σ1 and σ2, in the limiting case 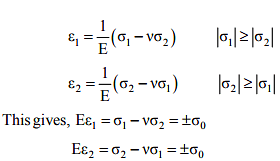 The boundary of a yield surface in this case is thus given as shown in figure3.1.4.2.1 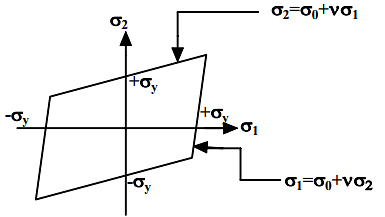 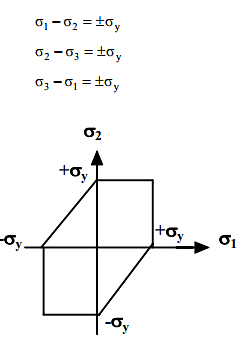 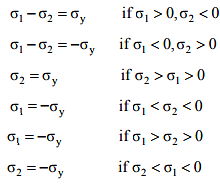 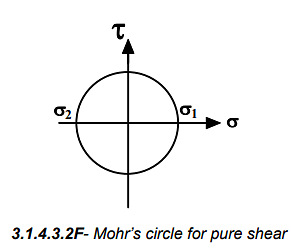 Substituting, ε1, ε2 , ε3 and εy in terms of stresses we have

This is the equation of an ellipse and the yield surface is shown in figure3.1.4.4.1 . 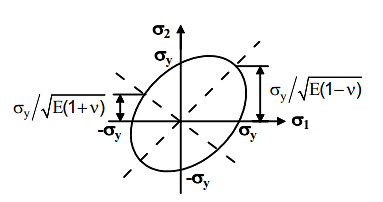 It has been shown earlier that only distortion energy can cause yielding but in the above expression at sufficiently high hydrostatic pressure σ1 = σ2 = σ3 = σ (say), yielding may also occur. From the above we may write

and if ν ~ 0.3, at stress level lower than yield stress, yielding would occur. This is in contrast to the experimental as well as analytical conclusion and the theory is not appropriate.

The failure criterion is thus obtained by equating Ed and Edy , which gives

This is an equation of ellipse and the yield surface is shown in figure-3.1.4.5.1 . This theory agrees very well with experimental results and is widely used for ductile materials. 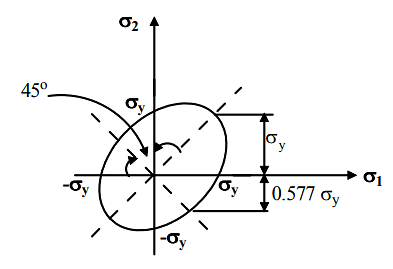 A comparison among the different failure theories can be made by superposing the yield surfaces as shown in figure- 3.1.5.1. 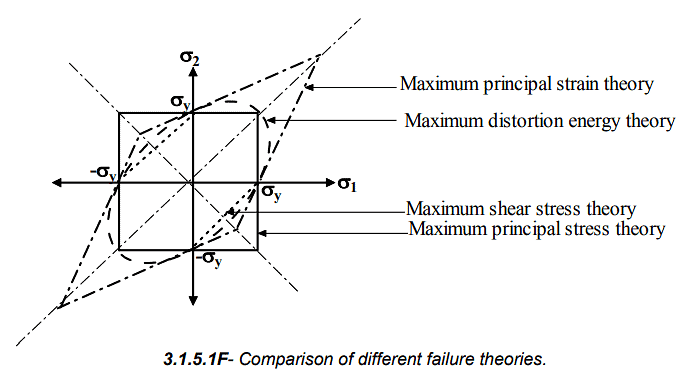 It is clear that an immediate assessment of failure probability can be made just by plotting any experimental in the combined yield surface. Failure of ductile materials is most accurately governed by the distortion energy theory where as the maximum principal strain theory is used for brittle materials.