The operating principle of this type of brake is the following. A flexible band of leather or rope or steel with friction lining is wound round a drum. Frictional torque is generated when tension is applied to the band. It is known (see any text book on engineering mechanics) that the tensions in the two ends of the band are unequal because of friction and bear the following relationship:

If the band is wound around a drum of radius R, then the braking torque is

Depending upon the connection of the band to the lever arm, the member responsible for application of the tensions, the band brakes are of two types,

In simple band brake one end of the band is attached to the fulcrum of the lever arm (see figures 12.2.1(a) and 1(b) ). The required force to be applied to the lever is

for clockwise rotation of the brake drum and

for anticlockwise rotation of the brake drum,

where l = length of the lever arm andb = perpendicular distance from the fulcrum to the point of attachment of other end of the band. 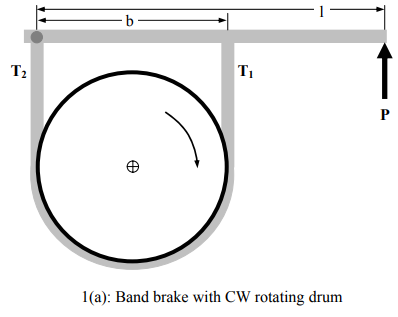 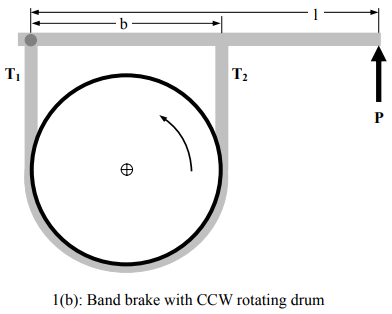 In this type of band brake, two ends of the band are attached to two points on the lever arm other than fulcrum (see figures 12.2.2(a) and 12.2.2(b)). Drawing the free body diagram of the lever arm and taking moment about the fulcrum it is found that

for clockwise rotation of the brake drum and

foranti clockwise rotation of the brake drum and

Hence, P is negative if

for clockwise rotation of the brake drum

for counterclockwise rotation of the brake drum. In

these cases the force is to be applied on the lever arm in opposite direction to maintain equilibrium. The brakes are then self locking.

The important design variables of a band brake are the thickness and width of the band. Since the band is likely to fail in tension, the following relationship is to be satisfied for safe operation. 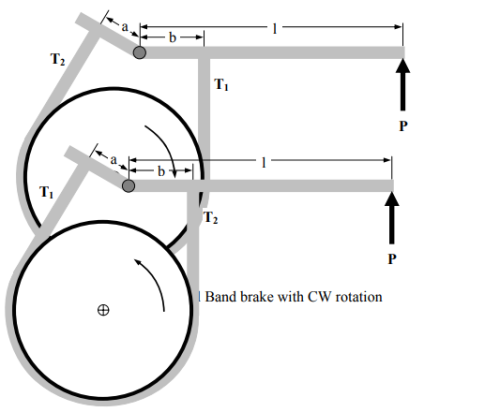 Sometimes instead of applying continuous friction lining along the band, blocks of wood or other frictional materials are inserted between the band and the drum. In this case the tensions within the band at both sides of a block bear the relation

In this type of brake two friction pads are pressed axially against a rotating disc to dissipate kinetic energy. The working principle is very similar to friction clutch. When the pads are new the pressure distribution at pad-disc interface is uniform, i.e.

If F is the total axial force applied then p =  F/A, where A is the area of the pad. The frictional torque is given by

where μ = coefficient of kinetic friction and r is the radial distance of an infinitesimal element of pad. After some time the pad gradually wears away. The wear becomes uniforms after sufficiently long time, when

The braking torque is

It is clear that the total braking torque depends on the geometry of the pad. If the annular pad is used then

where R1 and R2 are the inner and outer radius of the pad.

Friction materials and their properties.