Brakes are devices that dissipate kinetic energy of the moving parts of a machine. In mechanical brakes the dissipation is achieved through sliding friction between a stationary object and a rotating part. Depending upon the direction of application of braking force, the mechanical brakes are primarily of three types 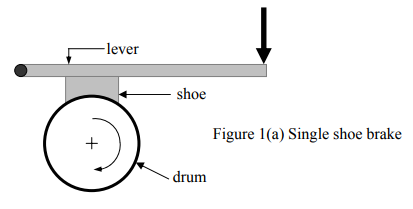 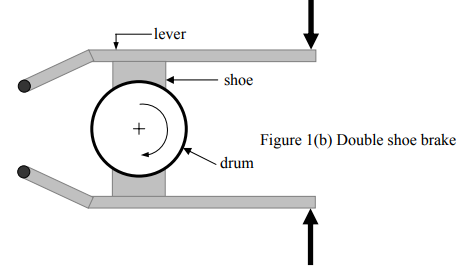 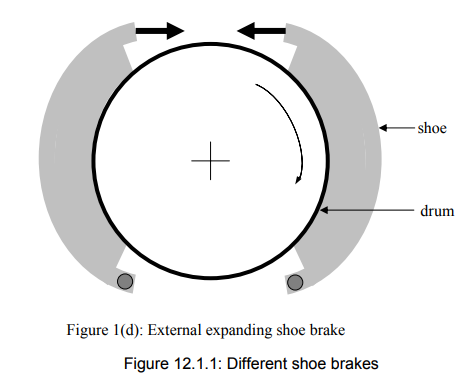 Single Shoe brake The force needed to secure contact is supplied by a lever. When a force F is applied to the shoe (see figure 12.1.2a ) frictional force proportional to the applied force ' Ffr = μ' F develops, where μ ' depends of friction material and the geometry of the shoe. A simplified analysis is done as discussed below.

Though the exact nature of the contact pressure distribution is unknown, an approximation (based on wear considerations) is made as

Where the angle is measured from the centerline of the shoe. If Coulomb’s law of friction is assumed to hold good, then

Since the net normal force of the drum is F, one has

Where R and b are the radius of the brake drum and width of the shoe respectively.The total frictional torque is

If the total frictional force is assumed to be a concentrated one, then the equivalent force becomes 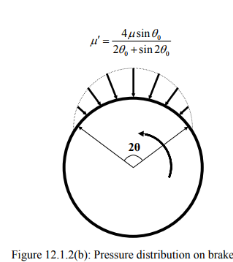 Consider, now single shoe brakes as shown in figures 12.1.3(a) and 3(b). Suppose a force P is applied at the end of a lever arm with length l. The shoe placed at a distance x from the hinge experiences a normal force N and a friction force F, whose direction depends upon the sense of rotation of the drum. Drawing free body diagram of the lever and taking moment about the hinge one gets

(a) for clockwise rotation of the brake wheel,

(b) for anticlockwise rotation of the brake wheel,

Where a is the distance between the hinge and the line of action of F and is measured positive when F acts below point O as shown in the figure. Using Coulomb’s law of friction the following results are obtained,

(a) for clockwise rotation

(b) for anticlockwise rotation

It may be noted that for anticlockwise rotating brake, if μ > x/a, then the force P has negative value implying that a force is to applied in the opposite direction to bring the lever to equilibrium. Without any force the shoe will, in this case, draw the lever closer to the drum by itself. This kind of brake is known as ‘selflocking, brake. Two points deserve attention.

(1) If a < 0, the drum brake with clockwise rotation becomes self-energizing and if friction is large, may be self locking. 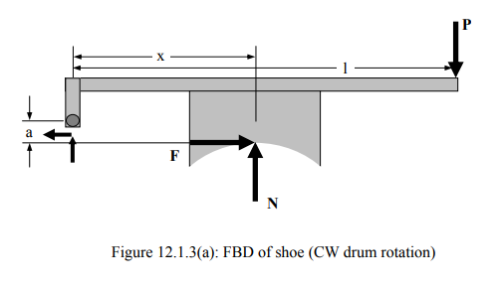 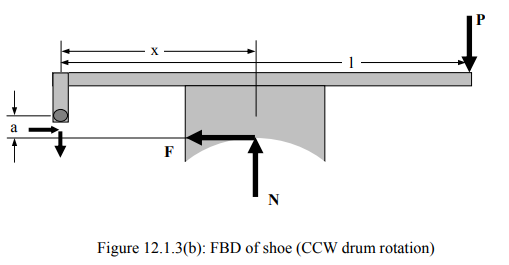 An external expanding shoe brake consists of two symmetrically placed shoes having inner surfaces coated with frictional lining. Each shoe can rotate about respective fulcrum (say, O1 and  O2). A schematic diagram with only one shoe is presented (figure 12.1.4) When the shoes are engaged, non-uniform pressure develops between the friction lining and the drum. The pressure is assumed to be proportional to wear which is in turn proportional to the perpendicular distance from pivoting point (O1N in figure 12.1.4). A simple geometrical consideration reveals that this distance is proportional to sine of the angle between the line joining the pivot and the center of the drum and the line joining the center and the chosen point. This means

where the angle is measured from line OO1 and is limited as θ1 ≤ θ ≤ θ2 . Drawing the free body diagram of one of the shoes (left shoe, for example) and writing the moment equilibrium equation about (say) the following equation is resulted for clockwise rotation of the drum :

Where is the force applied at the end of the shoe, and

where δ is the distance between the center and the pivot (OO1 in figure 12.1.4) and A is the distance from the pivot to the line of action of the force F1 (O1C in the figure). In a similar manner the force to be applied at the other shoe can be obtained from the equation

The net braking torque in this case is 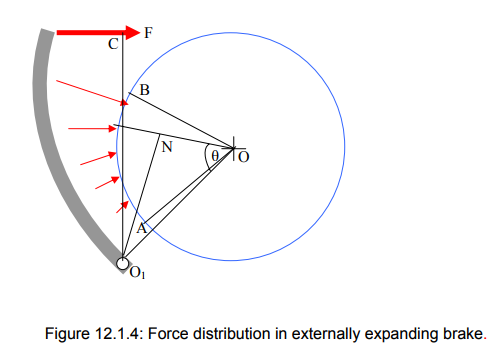 Here the brake shoes are engaged with the internal surface of the drum. The analysis runs in the similar fashion as that of an external shoe brake. The forces required are

respectively. One of the important member of the expanding shoe brakes is the anchor pin. The size of the pin is to be properly selected depending upon the face acting on it during brake engagement.